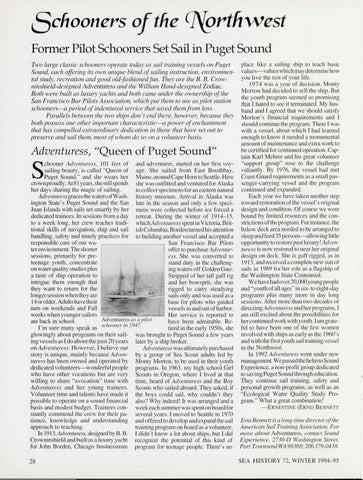 Schooners of the CJY.qrthwest Former Pilot Schooners Set Sail in Puget Sound Two large classic schooners operate today as sail training vessels on Puget Sound, each offering its own unique blend of sailing instruction, environmental study, recreation and good old-fashioned fun. They are the B. B. Crowninshield-designed Adventuress and the William Hand-designed Zodiac. Both were built as luxwy yachts and both came under the ownership of the San Francisco Bar Pilots Association, which put them to use as pilot station schooners-a period of indentured service that saved them from loss. Parallels between the two ships don&#39;t end there, however, because they both possess one other important characteristic-a power of enchantment that has compelled extraordinary dedication in those that have set out to preserve and sail them, most of whom do so on a volunteer basis.

place like a sailing ship to teach basic values-values which may determine how you live the rest of your life. 1974 was a year of decision . Monty Morton had decided to sell the ship. But the yo uth progrru11 seemed so promising that I hated to see it tenni nated. My husband and I agreed that we should satisfy Morton&#39;s financial requirements and I should continue the program. There I was with a vessel, about which I had leru11ed enough to know it needed a monumental amou nt of mai ntenance and extra work to be certified for continued operation. Captain Kru·l Mehrer and his great volunteer &quot;support group&quot; rose to the challenge vali antl y. By 1976, the vessel had met Coast Guru·d requirements as a small passenger-cru-rying vessel and the program conti nued and expanded. Each year we have taken another step toward restoration of the vessel&#39;s original design and condition. Of course we were bound by limited resources and the constrictions of the progranl. For instance, the below deck ru·ea needed to be rurnnged to sleep and feed 35 persons-allowing little oppo1tunity to restore past luxury! Adventuress is now restored to neru· her original design on deck . She is gaff 1igged, as in 1913, and received a complete new suit of sails in 1989 for her role as a flagship of the Washington State Centennial. We have had over20,000 you ng people and &quot;youth of all ages&quot; in six- to eight-day progran1s plus many more in day long sessions. After more than two decades of di.rectingAdventuress and her programs, I am sti ll excited abo ut the possibilities fo r her continued work with youth. lam grateful to have been one of the few women involved with ships as early as the 1960&#39; s and with the first youth sail training vessel in the Northwest. In 1992 Adventuress went under new management. We passed the helm to Sound Experience, a non-profit group dedicated to saving Puget Sound through education. They continue sai l training, safety and personal growth programs, as well as an &quot;Ecological Water Quality Study Progrlli11.&quot; What a great combination!

chooner Adventuress, LOJ feet of and adventurer, struted on her first voysailing beauty, is called &quot;Queen of age. She sailed from East Boothbay, Puget Sound,&quot; and she wears her Maine, ru·ound Cape Hom to Seattle. Here crown proudly. At8 l years, she stiII spends she was outfitted and ventured fo r Alaska her days sharing the magic of sailing. to collect specimens for ru1 eastern natural Adventuress graces the waters of Wash- history museum. Arrival in Alaska was ington State&#39;s Puget Sound and the San late in the season and only a few speciJuan Islands with sails set smartly by her mens were collected before ice forced a dedicated trainees. In sessions from a day retreat. Dwing the winter of 1914-15, to a week long, her crew teaches tradi- which Adventuress spent in Victoria, Brittional skills of navigation , ship and sail ish Columbia, Borden turned hi s attention handling, safety and timely practices for to building another vessel and accepted a responsible care of our waSan Francisco Bru· Pilots ter environment. Thesh01ter offer to purchase Adventursessions, primarily for preess. She was converted to teenage youth, concentrate stand duty in the challengon water quality studies plus ing waters off Golden Gate. a taste of ship operation to Stripped of her tall gaff rig intrigue them enough that and her bowsprit, she was they want to return for the rigged to carry steadying longer session when they are sai ls onl y and was used as a 14 orolder. Ad ults have their base fo r pi lots who guided tum on weekends and Fall vessels in and out of harbor. weeks when younger sai Iors &#39;--~=-&quot;&#39;=CL.--~&quot;&quot;&quot; Her service is reported to ru·e back in school. Adventuress as a pilot have been admirable. ReI&#39;m sure many speak as schooner in 1947 tired in the eru·ly 1950s, she glowingly about programs on their sai l- was brought to Puget Sound a few years ing vessels as I do about the past 20 years later by a ship broker. on Adventuress. However, I believe our Adventuress was ultimately purchased story is uniq ue, mainly because Adven- by a group of Sea Scout adults led by turess has been owned and operated by Monty Morton, to be used in their youth dedicated volunteers-wonderful people programs. In 1963, my high school Girl who have other vocations but are very Scouts in Oregon, where I lived at that willing to share &quot;avocation&quot; time with time, heard of Adventuress and the Boy Adventuress and her yo ung trainees. Scouts who sailed aboard. They asked, if Volunteer time and talents have made it the boys could sail , why couldn&#39;t they poss ible to operate on a sound financial also? Why indeed! It was aJTanged and a basis and modest budget. Trainees con- week each summer was spent on board for stantly commend the crew for the ir pa- several years. I moved to Seattle in 1970 ti ence, knowledge and understanding and offered to develop and expand the sail approach to teaching. training progranl on board as a volunteer. In 1913,Adventuress, designed by B. B. I didn &#39; t know a lot about ships, but I did Crowninshield and built as a luxury yacht recognize the potential of this kind of for John Borden, Chicago businessman program for teenage people. There&#39; s no