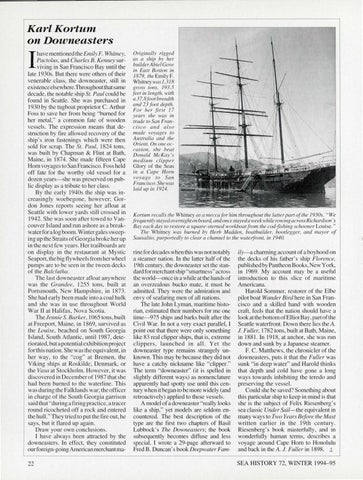 Karl Kortum on Downeasters have mentioned the Emily F. Whitney, Pactolus, and Charles B. Kenney surviving in San Francisco Bay until the late 1930s. But there were others of their venerable class, the downeaster, still in existence elsewhere.Throughout that same decade, the notable ship St. Paul could be fo und in Seattle. She was purchased in 1930 by the tugboat proprietor C. Arthur Foss to save her from being &quot;burned fo r her metal,&quot; a common fate of wooden vessels. The expression means that destruction by fire allowed recovery of the ship&#39; s iron fasteni ngs which were then sold fo r scrap. The St. Paul, 1824 tons, was built by Chapman &amp; Flint at Bath, Maine, in 1874. She made fifteen Cape Horn voyages to San Francisco. Foss held off fate for the worth y old vessel for a dozen years-she was preserved on public display as a tribute to her class. By the earl y 1940s the ship was increas ingly woebegone, however; Gordon Jones reports seeing her afl oat at Seattle with lower yards sti ll crossed in 1942. She was soon after towed to Vancouver Island and run ashore as a breakwaterfo r a log boom. Winter gales sweeping up the Straits of Georgia broke her up in the next few years. Her trail boards are on display in the restaura nt at Mystic Seaport, the big fl ywheels fro m her wheel pumps are to be seen in the tween decks of the Balclutha . The last downeaster afloat anywhere was the Grandee, 1255 tons, built at Portsmouth, New Hampshire, in 1873 . She had earl y been made into a coal hul k and she was in use throughout World War II at Halifax, Nova Scoti a. Th e Jennie S. Barker, 1065 tons, built at Freeport, Maine, in 1869, survived as the Louise, beached on South Georgia Island, South Atlantic, un til 1987 , deteriorated, but a potential ex hjbiti on proj ect for this nation. She was the equi valent, in her way , to the &quot;cog&quot; at Bre men, the Viking ships at Roski lde, Denmark, or the Vasa at Stockholm . However, it was discovered in December of 1987 that she had been burned to the waterline. Thj s was during the Falklands war; the officer in charge of the South Georgia garrison said that &quot;during a firing practice, a tracer round ricocheted off a rock and entered the hull. &quot; They tried to put the fire out, he says, but it fl ared up again . Draw yo ur own conclu sions. I have always been attracted by the downeasters. In effec t, they constituted ourforeign-going American merchant ma-

Originally rigged as a ship by her builder Abiel Go ve in East Boston in 1879, the Emil yF. Whitney was 1,318 gross tons, 193.5 f eet in length, with a 37. 8 foot breadth and 23 foot depth. For her firs t 17 years she was in trade to San Francisc o and also made voyages to Australia and the Orient. On one occasion, she beat Donald McKay&#39;s med ium clipp e r Glory of the Seas in a Cape Horn voya ge to San Francisco. She was laid up in 1924.

Kortum recalls the Whi tney as a mecca fo r him throughout the latter part of the 1930s. &quot; We f requently stayed overnight on board, and once stayed a week while rowing across Richardson&#39;s Bay each day to restore a square-sterned wo rkboatfrom the cod-fishing schooner Lo ui se. &quot; Th e Whitney was burned by Herb Madden, boatbuilder, bootlegge r, and mayor of Sausalito, purportedly to clear a channel to the waterf ront, in 1940.

rine for decades when thjs was not notably a steamer nation. In the latter half of the 19th century, the downeaster set the standard fo rmerchant ship &quot;smartness&quot; across the world- once in a while at the hands of an overzealous bucko mate, it must be adrrutted. They were the admiration and envy of seafaring men of alJ nations. The late John Lyman, maritime hi stori an, estimated their numbers fo r me one time- 975 ships and barks built after the Civil War. In not a very exact parallel, I point out that there were only something like 83 real clipper shjps, that is, extreme c lippers, la un c hed in all. Yet th e downeaster type remains strangely unknown. This may be because they did not have a catchy nickname like &quot;clipper.&quot; The term &quot;downeaster&quot; (it is spelled in slightly different ways) as nomenclature apparently had spotty use until thi s century when it began to be more widely (and retroactively) applied to these vessels. A model ofa downeaster &quot;really looks li ke a ship,&quot; yet models are seldom encountered. The best description of the type aiÂˇe the first two chapters of Basil Lubbock &#39; s The Downeasters; the book subsequently becomes diffuse and less special . I wrote a 29-page afterwaiÂˇd to Fred B. Duncan&#39;s book Deepwater Fam-

ily- a channing account of a boyhood on the decks of his father&#39;s ship Florence, publi shed by Pantheon Books, New York, in 1969. My account may be a useful introduction to thi s slice of maritime Americana. Harold Sommer, restorer of the Elbe pilot boat Wander Bird here in San Francisco and a skilled hand with wooden craft, feels that the nation should have a look at the bottom ofElliotBay, part of the Seattle waterfront. Down there lies the A. J. Fuller, 1782 tons, built at Bath, Maine, in 188 1. In 1918, at anchor, she was run down and sunk by a Japanese steamer. F. C. Matthews, the chronicler of the downeasters, puts it that the Fuller was sunk &quot;in deep water&quot; and Harold thinks that depth and co ld have gone a long ways towards inhibiting the teredo and preserving the vessel. Could she be saved? Something about thi s particular ship to keep in mind is that she is the subject of Feli x Ri esenberg&#39; s sea cl assic Under Sail- the equivalent in many ways to Two Years Befo re the Mast writte n earli er in th e 19th ce ntury . Rjesenberg&#39; s book masterfull y, and in wonderfully human terms, describes a voyage around Cape Horn to Honolulu and back in the A. J. Fuller in 1898. .t