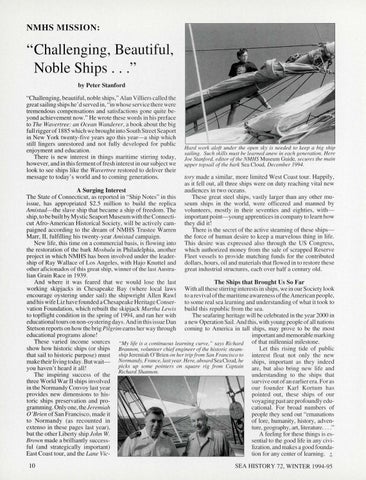 &quot;Challenging, Beautiful, Noble Ships ... &quot; by Peter Stanford &quot;Challenging, beautiful, noble ships,&quot; Alan Villiers called the great sailing ships he&#39;d served in, &quot;in whose service there were tremendous compensations and satisfactions gone quite beyond achievement now.&quot; He wrote these words in his preface to The Wavertree: an Ocean Wanderer, a book about the big full riggerof 1885 which we brought into South Street Seaport in New York twenty-five years ago this year-a ship which still lingers unrestored and not fully developed for public enjoyment and education. There is new interest in things maritime stirring today, however, and in this ferment of fresh interest in our subject we look to see ships like the Wavertree restored to deliver their message to today &#39;s world and to coming generations.

Hard work aloft under the open sky is needed to keep a big ship sailing. Such skills must be learned anew in each generation. Here Joe Stanford, editor of the NMHS Museum Guide, secures the main upper topsail of the bark Sea Cloud, December 1994. tory made a similar, more limited West Coast tour. Happily ,

as it fell out, all three ships were on duty reaching vital new audiences in two oceans. These great steel ships, vastly larger than any other museum ships in the world, were officered and manned by volunteers, mostly in their seventies and eighties, withimportant point-young apprentices in company to learn how they did it! There is the secret of the active steaming of these shipsthe force of human desire to keep a marvelous thing in life. This desire was expressed also through the US Congress, which authorized money from the sale of scrapped Reserve Fleet vessels to provide matching funds for the contributed dollars, hours, oil and materials that flowed in to restore these great industrial structures , each over half a century old.

The State of Connecticut, as reported in &quot;S hip Notes&quot; in this issue, has appropriated $2.5 million to build the replica Amistad- the slave ship that became a ship of freedom. The ship, to be built by Mystic Seaport Museum with the Connecticut Afro-American Historical Society, will be actively campaigned according to the dream of NMHS Trustee Warren Marr, II, fulfilling his twenty-year Amistad campaign. New life, this time on a commercial basis, is flowin g into the restoration of the bark Moshulu in Philadelphia, another project in which NMHS has been involved under the leadership of Ray Wallace of Los Angeles, with Hajo Knuttel and other aficionados of this great ship, winner of the last Australian Grain Race in 1939. And where it was feared that we would lose the last The Ships that Brought Us So Far working skipjacks in Chesapeake Bay (where local laws With all these stirring interests in ships, we in our Society look encourage oystering under sail) the shipwright Allen Raw l to a revival of the maritime awareness of the American people, and his wife Liz have founded a Chesapeake Heritage Conser- to some real sea learning and understanding of what it took to vation Foundation, which rebuilt the skipjack Martha Lewis build thi s republic from the sea. to topflight condition in the spring of 1994, and ran her with The seafaring heritage will be celebrated in the year 2000 in educational tours on non-oystering days. And in this issue Dan a new Operation Sail. And this, with young people of all nations Stetson reports on how the brig Pilgrim earns her way through coming to America in tall ships, may prove to be the most educational programs alone! important and memorable marking These varied income sources of that millennial milestone. &quot;My life is a continuous learning curve,&quot; says Richard show how historic ships (or ships Brannon, volunteer chief engineer of the historic steamLet this rising tide of public that sail to historic purpose) must ship Jeremiah O&#39;Brien on her trip from San Francisco to interest float not only the new Normandy, France, last year. Here, aboard Sea Cloud, he maketheirlivingtoday.Butwaitships, important as they indeed picks up some pointers on square rig from Captain you haven&#39;t heard it all! are, but also bring new life and Richard Shannon. The inspiring success of the understanding to the ships that three World War II ships involved survive out of an earlier era. For as in the Normandy Convoy last year our founder Karl Kortum has provides new dimensions to hispointed out, these ships of our toric ships preservation and provoyaging past are profoundly edugramming. Only one, the Jeremiah cational. For broad numbers of O&#39;Brien of San Francisco, made it people they send out &quot;emanations to Normandy (as recounted in of lore, humanity, history, advenextenso in these pages last year) , ture, geography, art, literature . .. .&quot; but the other Liberty ship John W. A feeling for these things is esBrown made a brilliantly successsential to the good life in any civiful (and strategically important) lization, and makes a good foundaEast Coast tour, and the Lane Viction for any center of learning. .t