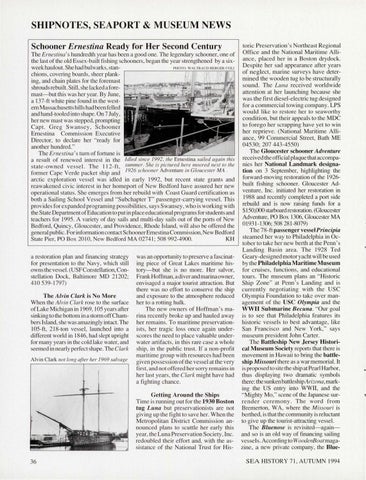 SHIPNOTES, SEAPORT & MUSEUM NEWS Schooner Ernestina Ready for Her Second Century The Ernestina's hundredth year has been a good one. The legendary schooner, one of the last of the old Essex-built fishing schooners, began the year strengthened by a sixweekhaulout. She had bul warks, stanPHOTO: WALTR AUD BERGER COLI chions, covering boards, sheer planking, and chain plates fo r the fo remast shrouds rebuilt. Still, she lacked a fo remast- but this was her year. By June, a 137-ft white pine fo und in the western Massachusetts hills had been felled and hand-tooled into shape. On 7 July, her new mast was stepped, prompting Ca pt. G reg S wansey, Schoo ne r Ernestina Commi ss ion Executive Director, to declare her "ready for another hundred." The Ernestina's tum of fo rtune is a result of renewed interest in the Idled since 1992, the Ernestina sailed again this state-ow ned vesse l. T he 11 2-ft, summer. She is pictured here moored next to the fo rmer Cape Verde packet ship and 1926 schooner Adventure in Gloucester MA. arcti c exploration vessel was idled in early 1992, but recent state grants and reawakened civic interest in her homeport of New Bedfo rd have assured her new operational status. She emerges from her rebuild with Coast Guard certification as both a Sailing School Vessel and "S ubchapter T" passenger-ca1Tying vessel. This provides fo r expanded programing possibilities, says Swansey, who is working with the State Depattment ofEducation to put in place educational programs for students and teachers for 1995. A variety of day sail s and multi-day saii s out of the po1ts of New Bedfo rd, Quincy, Gloucester, and Providence, Rhode Island, will also be offered the general public. For information contact Schooner Ernestina Commission, New Bedford State Pier, PO Box 20 10, New Bedford MA 02741; 508 992-4900. KH a restoration plan and financing strategy fo r presentation to the Navy, which still owns the vessel. (USF Constellation, Constellation Dock, Baltimore MD 21202; 4 10 539-1797) The Alvin Clark is No More When the Alvin Clark rose to the smface of Lake Michigan in 1969, 105 years after sinking to the bottom in a storm off Chain bers Island, she was amazingly intact. The 105-ft, 218-ton vessel, launched into a different world in 1846, had slept upright for many years in the cold lake water, and seemed in neai·ly perfect shape. The Clark A lvin C lar k not long after her 1969 salvage

was an opportun ity to preserve a fascinating piece of Great Lakes maritime history-but she is no more. Her salvor, Frank Hoffman, a diver and marina owner, envisaged a major tourist attraction. But there was no effort to conserve the ship and exposure to the atmosphere reduced her to a rotting hulk. The new owners of Hoffman 's marina recentl y broke up and hauled away her remains. To maritime preservationists, her trag ic loss once again underscores the need to pl ace valuable underwater artifac ts, in this rai·e case a whole shi p, in the public trust. If a non-profit maritime group with resources had been given possession of the vessel at the very fi rst, and not offered her soJTy remains in her last years, the Clark mi ght have had a fig hting chance. Getting Around the Ships T ime is running out fo r the 1930 Boston tug Luna but preservationists are not giving up the fig ht to save her. When the Metropolitan District Commission announced plans to scuttle her earl y this year, the Luna Preservation Society, Inc. redoubl ed their effo rt and, with the assistance of the National Trust for His-

toric Preservation's ortheast Reg ional Office and the ational Maritime Alli ance, placed her in a Boston drydock. Despite her sad appearance after years of n eglect, marine surveys have determined the wooden tug to be structurally sound. The Luna received worldwide attention at her launching because she was the first diesel-electric tug des igned for a commercial towing company. LPS would like Lo restore her to seaworthy condition , but their appeals to the MDC to forego her scrapping have yet to win her reprieve. (National Mai·itime Alliance, 99 Commercial Street, Bath ME 04530; 207 443-4550) The Gloucester schooner Adventure received the official plaque that accompanies her National Landmark designation on 3 September, highlighting the forward-moving restoration of the 1926built fi shing schooner. Gloucester Adventure, Inc. initiated her restoration in 1988 and recently completed a port side rebuild and is now raising funds for a $150,000 starboai·d restoration. (Gloucester Adventure, PO Box 1306, Gloucester MA 01931-1306; 508 281 -8079) The 78 -ft passenger vessel Principia steamed her way to Philadelphia in October to take her new berth at the Penn 's Landin g Bas in area. The 1928 Ted Geary-designed motor yacht will be used by the Philadelphia Maritime Museum fo r c rui ses, functi ons, and educational tours. The museum pl ans an "Historic Ship Zone" at Penn ' s Landing and is curre ntl y negotiatin g with the USC Olympi a Foundati on to take over manageme nt of the USC Olympia and the WWII Submarine Becuna. "Our goal is to see that Philadelphia features its historic vessels to best advantage, like San Francisco and New York," says mu seum president John Carter. The Battleship New Jersey Historical Museum Society rep01ts that there is movement in Hawaii to bring the battleship Missouri there as a wai· memorial. It is proposed to site theshipat Pearl Harbor, thus displ aying two dramatic symbols there: the sunken battleship Arizona, mai·king the US entry into WWil, and the "Mighty Mo," scene of the Japanese surre nd e r cere mo ny. The word from Breme1ton, WA, where the Missouri is berthed , is that the community is reluctant to give up the tourist-attracting vessel. The Bluenose is rev isited-againand so is an old way of financing sailing vessels. According to WoodenBoatmagazine , a new private company, the Blue-