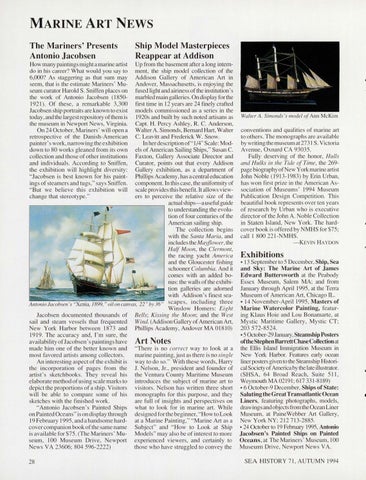 MARINE ART NEWS The Mariners&#39; Presents Antonio Jacobsen How many pai ntings mighta marine artist do in his career? What would you say to 6,000? As staggering as that sum may seem, that is the estimate Marine rs&#39; Museum curator Harold S. Sniffen places on the work of Antonio Jacobsen (1850192 1). Of these, a remarkable 3,300 Jacobsen ship portraits are known to exist today, and the largest repository of them is the museum in Newpo1t News, Virgini a. On 24 Octobe r, Mariners&#39; w ill o pe n a re trospective of the Danish-American painte r&#39;s work, narrow ing the exhibition down to 80 works g leaned from its own co llecti on and those of o the r instituti ons and individuals. According to Sniffen, the ex hibition will hig hlight di vers ity: &quot;Jacobsen is best known for his paintings of steamers and tugs,&quot; says Sniffen. &quot; But we believe this exhibition will change that stereotype .&quot;

Up from the basement afte r a long internment, the ship model collection of the Addison Gallery of American Art in Andover, Massachusetts , is enjoy ing the fu sed light and airiness of the institution &#39;s marbled main galleries. On display for the first time in 12 years are 24 fin ely crafted models comm issioned as a series in the 1920s and built by such noted artisans as Capt. H. Percy Ashley, R. C. Anderson, Walter A. Simonds, Bernard Hait, Walter C. Leavitt and Frederick W. Snow. In her description of&quot; l /4&quot; Scale: Models of American Sailing Ships,&quot; Susan C. Faxton, Gallery Associate Director and Curator, points out that every Addison Gallery exhibitio n, as a depaitment of Phillips Academy, has a central education component. In this case, the unifo1mity of scale provides this benefit. It allows viewers to perceive the relative size of the actual ships-a useful guide to understanding the evolution of fo ur centuries of the American sai ling ship. The coll ection begins with the Santa Maria , and includes theMayflower, the Half Moon, the Clermont, the racing yacht America and the Gloucester fishing schooner Columbia. And it comes with an added bonus: the walls of the exhibition galleries ai·e adorned with Addison &#39;s finest seaAntonio Jacobsen&#39;s &quot;Xenia, 1899, &quot; oil on canvas, 22&quot; by36&quot; scapes, including three Wins low Ho mers: Eight Jacobsen documented thousands of Bells; Kissing the Moon ; and the West sail and steam vessels that frequ ented Wind. (Addi son Gallery of American Alt, New York Harbor between 1873 and Phillips Academy, Andover MA 01810) 19 19. The acc uracy and, I&#39;m sure, the availa bility ofJacobsen &#39;s paintings have Art Notes made him o ne of the better known and &quot;There is no correct way to look at a marine painting, just as there is no single most favored artists among collectors. An inte resting aspect of the exhibit is way to do so.&quot; With these words, HaiTy the incorporatio n of pages from the J. Nelson, Jr. , president and founder of arti st&#39;s sketchbooks. They reveal his the Ventu ra County Maritime Museum elaborate method of using scale m arks to introduces the subject of marine art to depic t the proportions of a ship . V isitors vis itors. Nelson has written three short will be able to compare some of hi s monographs for this purpose, and they sketches with the finished work. are full of insights and perspectives on &quot;Antonio Jacobsen&#39;s Painted Ships what to look fo r in m arine art. While on Painted Oceans&quot; is on display thro ugh designed fo rthe beginner, &quot;How to Look 19 Fe bruary 1995 , and a handsome hard- at a Marine Painting,&quot; &quot;Marine Art as a cover com pan ion book of the same name Subject&quot; and &quot;How to Look at Ship is avai lable fo r $75 . (The Mariners&#39; Mu- Models &quot; may also be of interest to more seum , 100 Museum Drive, Newport experie nced viewers, and certainly to those who have struggled to convey the News VA 23606; 804 596-2222) 28

conventions and qualities of marine art to others. The m onographs are avail ab le byw ritingthemuseumat2731 S. V ictoria Avenue, Oxnard CA 93035. Fully deserving of the honor, Hulls and Hulks in the Tide of Time, the 269page biography of New Yo rk marinea1tist John Noble (1913-1983) by Erin Urban, has won first prize in the American Association of Museums&#39; 1994 Museum Publica tion Design Competiti on. T his beautiful book re presents over ten years of research by U rban who is executive director of the John A . Noble Co llectio n in Staten Island , New York. The hardcover book is offered by NMHS for $75; call l 800 22 1-NM HS. -KEVIN H AYDON