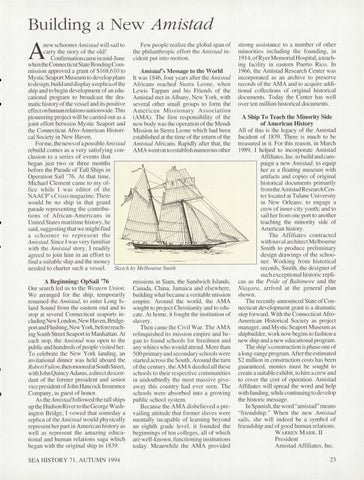 Few people realize the global span of ew schooner Amis tad will sail to the philanthropic effort the Amistad incarry the story of the old! Confirmation came in mid-June cident put into motion. when theConnecticutStateBondingCommission approved a grant of $168,610 to Amistad&#39;s Message to the World Mystic Seaport Museum to develop plans It was 1846, four years after the Amistad to design, build and display a replica of the Africans reached Sierra Leone, when ship and to begin development of an edu- Lewis Tappan and his Friends of the cational program to broadcast the dra- Amistad met in Albany, New York, with matic history of the vessel and its positive several other small groups to fonn the effect on human relations nationwide. This American Missionary Association pioneering project will be carried out as a (AMA). The fast responsibility of the joint effort between Mystic Seaport and new body was the operation of the Mendi the Connecticut Afro-American Histo1i- Mission in Sierra Leone which had been established at the time of the return of the cal Society in New Haven. For me, the news of a possibleAmistad Amistad Africans. Rapidly after that, the rebuild comes as a very satisfying con- AMA wenton to establish numerous other clusion to a series of events that began just two or three months before the Parade of Tall Ships in Operation Sail &#39;76. At that time, Michael Clement came to my office while I was editor of the NAACP&#39; sCrisismagazine. There would be no ship in that grand parade representing the contributions of African-Americans in United States maritime history, he said, suggesting that we might find a schooner to represent the Amistad. Since I was very familiar with the Amistad story, I readily agreed to join him in an effort to find a suitable ship and the money needed to charter such a vessel. Sketch by Melbourne Smith

A Beginning: OpSail &#39;76 Our search led us to the Western Union. We arranged for the ship, temporarily renamed the Amistad, to enter Long Island Sound from the eastern end and to stop at several Connecticut seaports including New London, New Haven, B1idgepo1tand Flushing, New York, before reaching South Street Seaport in Manhattan. At each stop, the Amistad was open to the public and hundreds of people visited her. To celebrate the New York landing, an invitational dinner was held aboard the Robert Fulton, then moored at South Street, with John Quincy Adams, a direct descendant of the forn1er president and senior vice president of John Hancock Insurance Company, as guest of honor. As theAmistadfollowed the tall ships uptheHudsonRiverto the George Washington Bridge, I vowed that someday a replica of the Amistad would physically represent her part in American history as well as represent the amazing educational and human relations saga which began with the original ship in 1839. SEA HISTORY 71, AUTUMN 1994

missions in Siam, the Sandwich Islands, Canada, China, Jamaica and elsewhere, building what became a veritable mission empire. Around the world, the AMA sought to project Christianity and to educate. At home, it fought the institution of slavery. Then came the Civil War. The AMA relinquished its mission empire and began to found schools for freedmen and any whites who would attend. More than 500 primary and secondary schools were started across the South. Around the turn of the century, the AMA deeded all these schools to their respective communities in undoubtedly the most massive giveaway this country had ever seen. The schools were absorbed into a growing public school system. Because the AMA di sbelieved a prevailing attitude that former slaves were mentally incapable of learning beyond an eighth grade level, it founded the beginnings of ten colleges, all of which are well-known, functioning institutions today. Meanwhile the AMA provided

strong assi stance to a number of other minorities including the founding , in 1914, of Ryer Memorial Hospital, a teaching facility in eastern Puerto Rico. In 1966, the Amistad Research Center was incorporated as an archive to preserve records of the AMA and to acquire additional collections of original historical documents. Today the Center has well over ten million historical documents.

A Ship To Teach the Minority Side of American History All of this is the legacy of the Amistad Incident of 1839. There is much to be treasured in it. For this reason , in March 1989, I helped to incorporate Amistad Affiliates, Inc. to build and campaign a new Amistad; to equip her as a floating museum with artifacts and copies of original historical documents primarily fromtheAmistadResearchCenter located at Tulane University in New Orleans; to engage a crew of inner-city youth; and to sai I her from one port to another teaching the minority side of American history. The Affiliates contracted with naval architect Melbourne Smith to produce preliminary design drawings of the schooner. Working from historical records, Smith, the designer of such exceptional historic replicas as the Pride of Baltimore and the Niagara, arrived at the general plan shown. The recently-announced State of Connecticut development grant is a dramatic step forward. With the Connecticut AfroAmerican Historical Society as project manager, and Mystic Seaport Museum as shipbuilder, work now begins to fashion a new ship and a new educational program. The ship&#39; s const:ruction is phase one of a long-range program. Afterthe estimated $2 million in construction costs has been guaranteed, monies must be sought to create a suitable exhibit, to hire a crew and to cover the cost of operation. Amistad Affiliates will spread the word and help with funding , while continuing to develop the historic message. In Spanish, the word &quot;amistad&quot; means &quot;friendship.&quot; When the new Amistad sails , she will indeed be a symbol of friendship and of good human relations. WARREN MARR, II