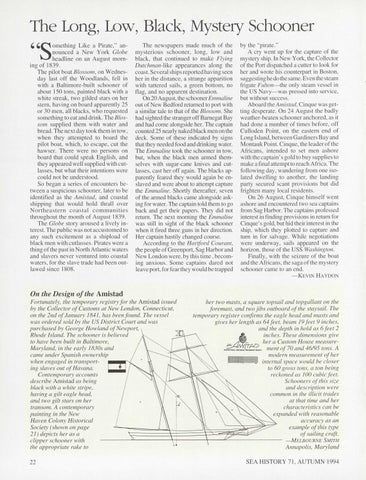 The Long, Low, Black, Mystery Schooner &#39;&#39;Something Like a Pirate,&quot; announced a New York Globe headline on an August morning of 1839. The pilot boat Blossom, on Wednesday last off the Woodlands, fell in with a Baltimore-built schooner of about 150 tons, painted black with a white streak, two gilded stars on her stern, having on board apparently 25 or 30 men , all blacks, who requested something to eat and drink. The Blossom supplied them with water and bread. The next day took them in tow, when they attempted to board the pilot boat, which, to escape, cut the hawser. There were no persons on board that could speak English , and they appeared well supplied with cutlasses, but what their intentions were could not be understood. So began a series of encounters between a suspicious schooner, later to be identified as the Amistad, and coastal shipping that would hold thrall over Northeastern coastal communities throughout the month of August 1839. The Globe story aroused a lively interest. The public was not accustomed to any such excitement as a shipload of black men with cutlasses. Pirates were a thing of the past in North Atlantic waters and slavers never ventured into coastal waters, for the slave trade had been outlawed since 1808.

The newspapers made much of the mysterious schooner, long, low and black, that continued to make Flying Dutchman-like appearances along the coast. Several ships reported having seen her in the distance, a strange apparition with tattered sails, a green bottom , no flag , and no apparent destination. On 20 August, the schooner Emmaline out of New Bedford returned to port with a similar tale to that of the Blossom. She had sighted the stranger off Barnegat Bay and had come alongside her. The captain counted 25 nearly naked black men on the deck. Some of these indicated by signs that they needed food and drinking water. The Emmaline took the schooner in tow, but, when the black men armed themselves with sugar-cane knives and cutlasses, cast her off again. The blacks apparently feared they would again be enslaved and were about to attempt capture the Emmaline. Shortly thereafter, seven of the anned blacks came alongside asking for water. The captain told them to go back and get their papers. They did not return . The next morning the Emmaline was still in sight of the black schooner when it fired three guns in her direction. Her captain hastily changed course. According to the Hartford Courant, the people of Greenport, Sag Harbor and New London were, by this time , becoming anxious. Some captains dared not leave port, for fear they would be trapped

by the &quot;pirate.&quot; A cry went up for the capture of the mystery ship. In New York, the Collector of the Port dispatched a cutter to look for her and wrote his counterpart in Boston, suggesting he do the same. Even the steam frigate Fulton-the only steam vessel in the US Navy-was pressed into service, but without success. Aboard theAmistad, Cinque was getting desperate. On 24 August the badly weather-beaten schooner anchored, as it had done a number of times before, off Culloden Point, on the eastern end of Long Island, between Gardiners Bay and Montauk Point. Cinque, the leader of the Africans, intended to set men ashore with the captain&#39;s gold to buy supplies to make a final attempt to reach Africa. The following day , wandering from one isolated dwelling to another, the landing party secured scant provisions but did frighten many local residents . On 26 August, Cinque himself went ashore and encountered two sea captains from Sag Harbor. The captains professed interest in finding provisions in return for Cinque&#39;s gold, but hid their interest in the ship, which they plotted to capture and turn in for salvage. While negotiations were underway, sails appeared on the horizon, those of the USS Washington. Finally, with the seizure of the boat and the Africans , the saga of the mystery schooner came to an end. -KEVIN HAYDON

On the Design of the Amistad Fortunately, the temporary registry for the Amistad issued by the Collector of Customs at New London, Connecticut, on the 2nd of January 1841, has beenfound. The vessel was ordered sold by the US District Court and was purchased by George Howland of Newport, Rhode Island. The schooner is believed/\ to have been built in Baltimore, Maryland, in the early 1830s and came under Spanish ownership when engaged in transport- ~ + ing slaves out of Havana. ~ Contemporary accounts describe Amistad as being black with a white stripe, having a gilt eagle head, and two gilt stars on her transom. A contemporary painting in the New Haven Colony Historical Society (shown on page 21) depicts her as a clipper schooner with the appropriate rake to 22

her two masts, a square topsail and topgallant on the foremast, and two jibs outboard of the staysail. The temporary register confirms the eagle head and masts and gives her length as 64 feet, beam 19 feet 9 inches, and the depth in hold as 6 feet 2 A inches. These dimensions give ~~ her a Custom House measure·~-!:.J!..TA&#39;2.., ment of 70 and 46195 tons. A modern measurement of her _ internal space would be closer to 60 gross tons, a ton being reckoned as JOO cubic feet. Schooners of this size and description were common in the illicit trades at that time and her characteristics can be expanded with reasonable accuracy as an example of this type of sailing craft.