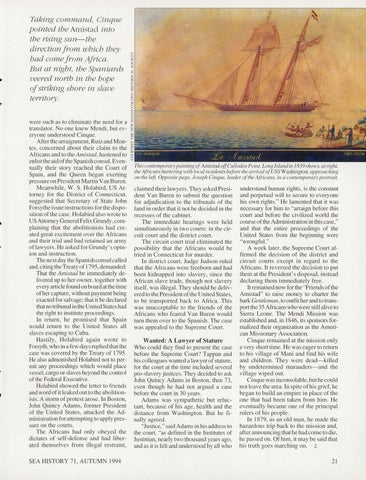 were such as to eliminate the need for a translator. No one knew Mendi, but everyone understood Cinque. After the arraignment, RufzandMontes, concerned about their cl aim to the Afri cans and to theAmistad, hastened to enlist the aid of the Spani sh consul. Eventually their story reached the Court of Spain, and the Queen began exerting pressure on President Martin Van Buren. Meanwhile, W. S. Holabird, US Attorney fo r the Di stri ct of Connecticut, suggested that Secretary of State John Forsythe issue instructions fo r the disposition of the case. Holabird also wrote to US Attorney General Feli x Grundy, complaining that the abolitionists had created great excitement over the Africans and the ir Lrial and had retained an army of lawyers. He asked for Grundy&#39;s opinion and instruction. The next day the Spanish consul called and, citing the Treaty of 1795, demanded : That the Amistad be immediately delivered up to her owner, together with every article fo und on board at the time of her capture, with out payment being exacted fo r salvage; that it be declared that no tribunal in the United States had the right to institute proceedings . In return , he pro mised that Spain would return to the United States all slaves escaping to Cuba. Hastily, Holabird again wrote to Forsyth, who in a few days replied that the case was covered by the Treaty of 1795. He also admonished Holabird not to permit an y proceedings which would pl ace vessel, cargo or slaves beyond the control of the Federal Executive. Holabird showed the letter to fri ends and word of it leaked out to the aboli tionists. A storm of protest arose. In Boston , John Quincy Adams, former President of the United States, attacked the Admini stration for attempting to apply pressure on the courts. The Afri cans had only obeyed the dictates of self-defense and had liberated themselves from illegal restraint, SEA HISTORY 7 1, AUTUM N 1994

This contemporary painting of Ami stad offCulloden Point, Long Island in 1839 shows, at right, the Africans bartering with local residents before the arrival of USS Washington, app roaching on the left. Opposite page, Joseph Cinque, leader of the Africans, in a contempora ry portrait.

claimed their lawyers. They asked President Van Buren to submit the question fo r adjudi cati on to the tribunals of the land in order that it not be decided in the recesses of the cabinet. The immediate hearings were held simultaneously in two courts: in the circuit court and the di strict court. The circuit court trial eliminated the possibility that the Africans would be tried in Connecticut fo r murder. In di strict court, Judge Judson ruled that the Afri cans were freeborn and had been kidnapped into slavery, since the African slave trade, though not slavery itself, was illegal. They should be delivered to the Pres ident of the U nited States, to be tra nsported back to Africa . This was un acceptable to the fri ends of the Afri cans who feared Van Buren would turn them over to the Spanish. The case was appealed to the Supreme Court.

Wanted: A Lawyer of Stature Who could they find to present the case before the Supreme Court? Tappan and his colleagues wanted a lawyer of stature, fo r the court at the time included several pro-slavery justices. They decided to ask John Quincy Adams in Boston, then 73, even though he had not argued a case before the court in 30 years. Adams was sy mpathetic but reluctant, because of hi s age, health and the di stance from Washington. But he finall y agreed. &quot;Justice,&quot; said Adams in his address to the court, &quot;as defined in the Institutes of Justini an, nearly two thousand years ago, and as it is felt and understood by all who

understand human ri ghts, is the constant and perpetual will to secure to everyone his own rights.&quot; He lamented that it was necessary for him to &quot;arraign before this court and before the ci vilized world the course of the Administration in this case,&quot; and that the entire proceedings of the United States from the beginning were &quot;wrongful. &quot; A week later, the Supreme Court affirmed the decision of the di stri ct and circuit courts except in regard to the Africans. It reversed the decision to put them at the President&#39;s di sposal , in stead decl aring them immedi ately free. It remained now fo r the &quot;Friends of the Arnistad&quot; to rai se money to charter the bark Gentleman, to outfit her and to transpo1t the 35 Africans who were still alive to Sierra Leone. The Mendi Mission was established and, in 1846, its sponsors formalized their organization as the American Missionary Association. Cinque remained at the mi ssion only a very short time. He was eager to return to hi s vill age of Mani and find his wife and children. They were dead-killed by undetermined marauders-and the vill age wiped out. Cinque was inconsolable, but he could not leave the area. In spite of hi s grief, he began to build an empire in pl ace of the one that had been taken from him. He eventu all y became one of the principal rulers of hi s peopl e. In 1879, as an old man, he made the hazardous trip back to the mi ss ion and, after announcing that he had come to die, he passed on. Of him , it may be said that hi s truth goes marching on. .t 21