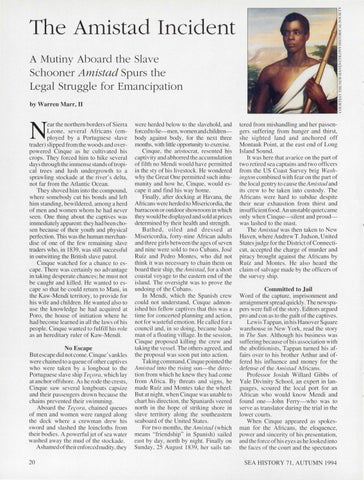 The Amistad Incident A Mutiny Aboard the Slave Schooner Amistad Spurs the Legal Struggle for Emancipation by Warren Marr, II

ear the northern borders of Sierra Leo ne, several African s (employed by a Portu guese slave trader) s 1ipped from the woods and overpowered Cinque as he cultivated hi s crops. They forced him to hike several days through the immense stands of tropi cal trees and lush undergrowth to a sprawling stockade at the river&#39;s delta, not fa r from the Atlantic Ocean. They shoved him into the compound , where somebody cut his bonds and left him standing, bewildered, among a herd of men and women whom he had never seen. One thing about the capti ves was immediately apparent: they had been chosen because of their youth and physical pe1fection . This was the human merchandi se of one of the few remaining slave traders who, in 1839, was still successful in outwitting the British slave patrol. Cinque watched for a chance to escape. There was certainl y no adva ntage in taking desperate chances; he must not be caught and killed. He wanted to escape so that he could return to Mani , in the Kaw-Mendi territory, to provide fo r his wife and ch ildren. He wanted also to use the knowledge he had acquired at Poro , the house of initi ation where he had become learned in all the laws of hi s peopl e. Cinque wanted to fulfill hi s role as an hereditary ruler of Kaw-Mendi.

No Escape But escape did not come. Cinque&#39;s ankl es were chained to a queue of other capti ves who were taken by a longboat to the Portuguese slave ship Tefora, which lay at anchor offshore. As he rode the crests, Cinque saw several longboats capsize and the ir passengers drown because the chains prevented their sw imming. Aboard the Tefora, chained queues of men and women were ranged along the deck where a crewman drew hi s sword and slas hed the lo inc loths from the ir bodi es. A powerful jet of sea water washed away the mud of the stockade. Ashamedoftheirenforced nudity, they 20

were herded below to the slavehold, and forced to lie-men, women and childrenbody against body, fo r the next three months, with Little oppo1tunity to exercise. C inque, the ari stocrat, resented his captivity and abhorred the acc umulation of filth no Mendi would have permitted in the sty of hi s livestock. He wo ndered why the Great One permitted such inhumanity and how he, Cinque, would escape it and find hi s way home. Finally, after docking at Havana, the Africans were herded to Mi sericordia, the barracoon or outdoor showroom in which they would be displayed and sold at prices determined by their health and strength. Bathed , o il e d a nd dre sse d at Mi sericordia, forty-nine African adults and three girl s between the ages of seven and nine were so ld to two Cubans, Jose Rufz and Pedro Montes, who did not think it was necessary to chain them on board their ship, the Amistad, for a short coastal voyage to the eastern end of the island . The oversight was to prove the undoing of the C ubans. In Mendi , which the Spanish crew could not understand, Cinque admonished hi s fellow captives that thi s was a time for concerted planning and acti on, not for wasteful emotion. He called for a council and, in so doing, became headman of a floatin g vill age. In the session, Cinque proposed killing the crew and taki ng the vessel. The others agreed, and the proposal was soon put into action . Taking command, Cinque pointed the Amistad into the rising sun- the directi on from which he knew they had come from Africa. By threats and signs, he made Rufz and Montes take the wheel. But at night, when C inque was unable to chart his direction, the Spaniards veered north in the hope of striking shore in slave territory along the southeastern seaboard of the United States. For two mon ths, the Amistad (whi ch means &quot;friendship&quot; in Spani sh) sailed east by day, north by ni ght. Fi nally on Sunday, 25 August 1839, her sail s tat-

tered from mi shandling and her passengers suffering from hunger and thirst, she s ig hted land and anchored off Montauk Point, at the east end of Long Island Sound. It was here that ava ri ce on the part of two retired sea captain s and two officers fro m the US Coast Survey brig Washington combined w ith fear on the part of the loca l gentry to cause theAmistad and its crew to be take n into custody. The Africans were hard to subdue despite the ir near ex haustion from thirst and in sufficient foo d. An un stable quietcame on ly when C inque-s ilent and proudwas lashed to the mas t. The Amistad was then taken to New Haven, where AndrewT. Judson, United States judge for the Di stri ct of Connecticut, accepted the charge of murder and piracy brought against the Africans by Rufz and Montes. He also heard the c laim of sa lvage made by the officers of the survey ship .

Committed to Jail Word of the capture, imprisonment and arraignment spread quickl y. The newspapers were full of the story. Editors argued pro and con as to the guilt of the captives. Lewi s Tappan , in hi s Hanove r Square warehou se in New York, read the story in The Sun. Although hi s business was suffering because of hi s association with the aboliti oni sts, Tappan turned hi s affairs over to his brother Arthur and offered hi s influence and money for the defense of the Amistad Africans. Professor Josiah Willard Gibbs of Yal e Divinity School , an expert in languages, scoured the local port for an African who wou ld know Mendi and found one-John Ferry-who was to serve as tra nslato r during the trial in the lower courts. When C inque appeared as spokesman for the Africans, the eloquence, power and sincerity of hi s presentation, and the fo rce of his eyes as he looked into the faces of the court and the spectators SEA HISTORY 71 , AUTUMN 1994