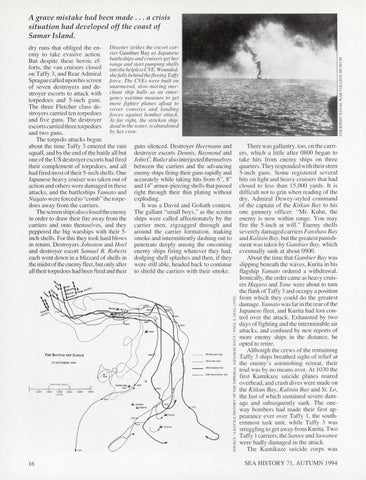 A grave mistake had been made ... a crisis situation had developed off the coast of Samar Island. Disaster strikes the escort cardry runs that obliged the enrier Gambier Bay as Japan ese emy to take evasive action. battleships and cruisers get her But despite these heroic efrange and start pumping shells forts , the van cruisers closed into the helpless CVE. Wounded, on Taffy 3, and Rear Admiral shefalls behind the fleeing Taffy Sprague called upon his screen force. The CVEs were built on unarmored, slow-moving merof seven destroyers and dechant ship hulls as an emerstroyer escorts to attack with gency wa rtime measure to gel torpedoes and 5-inch guns. in.ore fighter planes afloat to The three Fletcher c lass decover convoys and Landing stroyers carried ten torpedoes forces against bomber attack. and five guns. The destroyer At far right, the stricken ship, dead in the water, is abandoned escorts carried three torpedoes by her crew. and two guns. The torpedo attacks began abo ut the time Taffy 3 entered the rain guns silenced. Destroyer Heermann and squall , and by the end of the battle all but destroyer esco11s Dennis, Raymond and one of the US destroyer escorts had fired John C. Butler a lso interjected themselves their complement of torpedoes, and all between the car1iers and the advancing had fired most of their 5-inch shel ls. One enemy ships firing their guns rapidly and Japanese heavy cruiser was taken out of accurately while talcing hits from 6&quot;, 8&quot; action and others were damaged in these and 14&quot; armor-piercing shells that passed attacks, and the battleships Yamato and right through their thin plating without Nagato were forced to &quot;comb&quot; the torpe- exploding. does away from the carriers. It was a David and Goliath contest. The screen ships also closed the enemy The gallant &quot;small boys,&quot; as the screen in order to draw their fire away from the ships were called affectionately by the carriers and onto themselves, and they carrier men , zigzagged through and peppered the big warships with their 5- around the carrier formation, making inch she ll s. For this they took hard blows smoke and intermittently dashing out to in return . Destroyers Johnston and Hoel penetrate deeply among the oncoming and destroyer escmt Samuel B. Roberts enemy ships firing whatever they had, each went down in a blizzard of shell s in dodging shell splashes and then, if they the midst of the enemy fleet, but only after were still able, headed back to continue all their torpedoes had been foed and their to shield the carriers with their smoke.

There was gallantry, too, on the carriers, which a little after 0800 began to take hits from enemy ships on three quarters . They responded with their stern 5-inch guns. Some registered severa l hits on light and heavy cruisers that had closed to less than 15,000 yards. It is difficult not to grin when reading of the dry, Admiral Dewey-styled command of the captain of the Kitkun Bay to his one gunnery officer: &quot;Mr. Kuhn , the enemy is now within range. You may fire the 5-inch at will.&quot; Enemy shell s severe I y damaged carriers Fans haw Bay and Kalinin Bay, but the greatest punishment was taken by Gambier Bay, which eventually sank at about 0900. About the time that Gambier Bay was slipping beneath the waves, Kurita in his flagship Yamato ordered a withdrawal. Ironica lly , the order came as heavy cruisers Haguro and Tone were about to turn the flank of Taffy 3 and occupy a position from which they could do the greatest da1nage. Yaniato was far in the rear of the Japanese fleet, and Kurita had lost control over the attack. Exhausted by two days of fighting and the interminable air attacks, and confused by new reports of more enemy ships in the distance, he opted to retire. Although the crews of the remaining Taffy 3 ships breathed sighs of relief at the enemy&#39;s astonishing retreat, their trial was by no 111cans over. At 1030 the first Kan1ikaze suicide planes roared overhead, and crash dives were made on the Kitkun Bay, Kalinin Bay and St. Lo, the last of which sustained severe damage and subsequently sank. The oneway bombers had made their first appearance ever over Taffy 1, the southernn1ost task unit, whi le Taffy 3 was stru ggling to get away from Kurita. Two Taffy 1 carriers, the Santee and Suwanee were badly damaged in the attack. The Ka mikaze suicide corps was SEA HISTORY 71, AUTUMN 1994