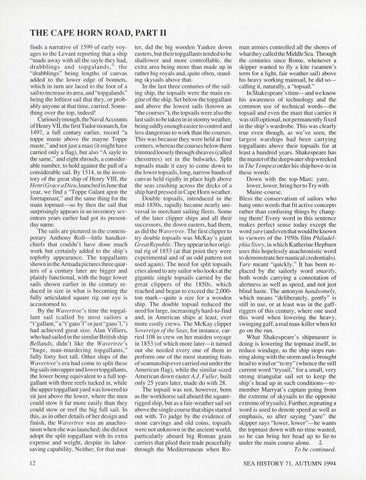 THE CAPE HORN ROAD, PART II finds a narrative of 1599 of early voyages to the Levant reporting that a ship &quot;made away with all the say le they had, drabblings and topgalands, &quot; the &quot;drabbli ngs&quot; being lengths of canvas added to the lower edge of bonnets, which in turn are laced to the foot of a sail to increase its area, and &quot;topgalands&quot; being the loftiest sail that they, or probably anyone at that time, carried. Something over the top, indeed! Curiously enough, the Naval Accounts of Henry VII, the first Tudor monarch, for 1497, a full century earlier, record &quot;a toppe maste above the mayne Toppe maste,&quot; and not just a mast (it might have carried only a flag), but also &quot;A sayle to the same,&quot; and eight shrouds, a considerable number, to hold against the pull of a considerable sail. By 1514, in the inventory of the great ship of Henry VIIl, the Henri Grace a Dieu, launched in June that year, we find a &quot;Toppe Galant apon the foretapmast,&quot; and the same thing for the main topmast-so by then the sail that surprisingly appears in an inventory seventeen years earlier had got its presentday name. The sails are pictured in the contemporary Anthony Roll-little handkerchiefs that couldn &#39;t have done much work but certainly added to the ship&#39;s toplofty appearance. The topgallants shown in the Annada pictures three quarters of a century later are bigger and plainly functional, with the huge lower sails shown earlier in the century reduced in size in what is becoming the fully articulated square rig our eye is accustomed to. By the Wavertree &#39; s time the topgallant sai l (called by most sailors a &quot;t&#39;gallant,&quot; a &quot;t&#39; gans &#39; I&quot; or just&quot;gans &#39; I,&quot;) had achieved great size. Alan Villiers, who had sailed in the sim ilar British ship Bellands, didn&#39;t li ke the Wavertree&#39;s &quot;huge, man-murdering topgallants ,&quot; fully forty feet tall. Other ships of the Wavertree&#39;s era had come to spl it these big sails into upper and lowertopgallants, the lower being equivalent to a full topgallant with three reefs tucked in, whi le the upper topgallant yard was lowered to sit just above the lower, where the men could stow it far more easily than they could stow or reef the big full sail. In th is, as in other details of her design and finish, the Wavertree was an anachronism when she was launched; she did not adopt the split topgallant with its extra expense and weight, despite its laborsaving capabil ity. Neither, for that mat12

ter, did the big wooden Yankee down easters, but their topgallants tended to be shallower and more controllable, the extra area being more than made up in rather big royals and, quite often, standing skysails above that. In the last three centuries of the sail ing ship, the topsails were the main engine of the ship. Set below the topgallant and above the lowest sai ls (known as &quot;the courses&quot;), the topsail s were also the last sails to be taken in in stormy weather, being oddly enough eas ier to control and less dangerous to work than the courses. This was because they were held at four corners, whereas the courses below them trimmed loosely through sheaves (call ed chesstrees) set in the bulwarks. Split topsails made it easy to come down to the lower topsails, long, narrow bands of canvas held rigidly in place high above the seas crashing across the decks of a ship hard pressed in Cape Horn weather. Double topsai ls, introduced in the mid- l 850s, rapidly became nearly universal in merchant sail ing fleets . Some of the later clipper ships and all their successors, the down easters, had them, as did the Wavertree. The first clipper to try double topsails was McKay&#39;s giant Great Republic. They appear in heroriginal rig of 1853 (at that point they were experimental and of an odd pattern not used again). The need for split topsails cries aloud to any sailor who looks at the gigantic si ngle topsails carried by the great clippers of the 1850s, which reached and began to exceed the 2,000ton mark-quite a size for a wooden ship. The double topsail reduced the need for large, increasi ngly hard-to-fi nd and, in American sh ips at least, ever more costly crews. The McKay clipper Sovereign of the Seas , for instance, carried 108 in crew on her maiden voyage in 1853 (of which more later-it turned out she needed every one of them to perform one of the most stunning feats of seamanship ever carried out under the American flag), whi le the simi lar-s ized American down easter A.J. Fuller, built on ly 25 years later, made do with 28. The topsail was not, however, born as the workhorse sail aboard the squarerigged ship, but as a fair-weather sail set above the single course that ships started out with. To judge by the evidence of stone carvings and old coins, topsails were not unknown in the ancient world, particularly aboard big Roman grain carriers that plied their trade peacefully through the Mediterranean when Ro-

man armies controlled all the shores of what they cal led the Middle Sea. Through the centuries since Rome, whenever a skipper wanted to fly a kite (seamen&#39;s term for a light, fair weather sail) above his heavy working mainsail, he did so-calling it, naturally, a &quot;topsail.&quot; In Shakespeare&#39;s time-and we know his awareness of technology and the common use of technical words-the topsail and even the mast that carries it was still optional, not permanently fixed in the ship &#39;s wardrobe. This was clearly true even though, as we&#39;ve seen, the largest warships had been carrying topgallants above their topsail s for at least a hundred years. Shakespeare has the master of the deep water ship wrecked in The Tempest order hi s ship hove-to in these words: Down with the top-Mast: yare, lower, lower, bring her to Try with Maine-course. Bless the conservatism of sailors who hang onto words that fit active concepts rather than confusing things by changing them! Every word in this sentence makes perfect sense today except the word yare (and even that would be known to viewers of the 1950s film Philadelphia Story, in which Katherine Hepburn uses this hopelessly anachronistic word to demonstrate her nautical credentials). Yare meant &quot;quickly.&quot; It has been replaced by the sailorly word smartly, both words carrying a connotation of alertness as well as speed, and not just blind haste. The antonym handsomely, which means &quot;deliberately, gently&quot; is still in use, or at least was in the gaffri ggers of this century , where one used this word when lowering the heavy , swinging gaff, a real man-killer when let go on the run. What Shakespeare&#39;s shipmaster is doing is lowering the topmast itself, to reduce windage, as the ship stops running along with the storm and is brought head to wind or &quot;to try&quot; (whence the still current word &quot;trysail,&quot; for a small, very strong triangular sail set to keep the ship&#39;s head up in such conditions-remember Marryat&#39;s captain going from the extreme of skysails to the opposite extreme oftrysails). Further, repeating a word is used to denote speed as well as emphasis, so after saying &quot;yare&quot; the skipper says &quot;lower, lower&quot;-he wants the topmast down with nci time wasted, so he can bring her head up to lie-to under the main course alone. 1To be continued. SEA HISTORY 71, AUTUMN 1994