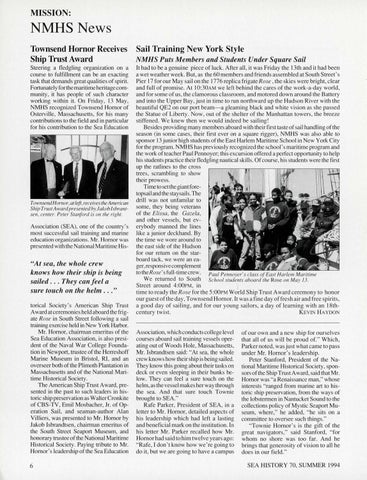 NMHS News Townsend Hornor Receives Ship Trust Award Steering a fledgling organization on a course to fulfillment can be an exacting task that demands great qualities of spirit. FortunateIy for the maritime heritage community, it has people of such character working within it. On Friday, 13 May, NMHS recognized Townsend Hornor of Osterville, Massachusetts, for his many contributions to the field and in particular for his contribution to the Sea Education

Townsend Hornor, at left , receives the American Ship Trust A ward presented by Jakob lsbrantsen , center. Peter Stanford is on the right.

Association (SEA), one of the country ' s most successful sail training and marine education organizations. Mr. Hornor was presented with the National Maritime His-

"At sea, the whole crew knows how their ship is being sailed ... They can feel a sure touch on the helm ... " torical Society's American Ship Trust A ward at ceremonies held aboard the frigate Rose in South Street following a sail training exercise held in New York Harbor. Mr. Hornor, chairman emeritus of the Sea Education Association, is also president of the Naval War College Foundation in Newport, trustee of the Herreshoff Marine Museum in Bristol, RI , and an overseer both of the Plimoth Plantation in Massachusetts and of the National Maritime Historical Society. The American Ship Trust Award, presented in the past to such leaders in historic ship preservation as Walter Cronkite of CBS-TV, Emil Mosbacher, Jr. of Operation Sail, and seaman-author Alan Villiers, was presented to Mr. Hornor by Jakob Isbrandtsen, chairman emeritus of the South Street Seaport Museum, and honorary trustee of the National Maritime Historical Society. Paying tribute to Mr. Hornor's leadership of the Sea Education

Sail Training New York Style NMHS Puts Members and Students Under Square Sail It had to be a genuine piece of luck. After all , it was Friday the 13th and it had been a wet weather week. But, as the 60 members and friends assembled at South Street's Pier 17 for our May sai l on the 1776 repli ca frigate Rose , the skies were bright, clear and full of promise. At 10:30AM we left behind the cares of the work-a-day world, and for some of us, the clamorous classroom , and motored down around the Battery and into the Upper Bay, just in time to run northward up the Hudson River with the beautiful QE2 on our port beam-a gleaming black and white vision as she passed the Statue of Liberty. Now, out of the shelter of the Manhattan towers, the breeze stiffened. We knew then we would indeed be sailing! Besides providing many members aboard with their first taste of sai l handling of the season (in some cases, their first ever on a square rigger), NMHS was also able to sponsor 13 junior high students of the East Harlem Maritime School in New York City forthe program. NMHS has previously recognized the school ' s maritime program and the work of teacher Paul Pennoyer; this excursion offered a perfect opportunity to help his students practice their fledgling nautical skills. Of course, his students were the first up the ratlines to the cross trees, scrambling to show their prowess. Time to setthe giant foretopsail and the staysai ls. The drill was not unfamilar to some, they being veterans of the Elissa, the Gaze/a, and other vessels, but everybody manned the lines like a junior deckhand. By the time we wore around to the east side of the Hudson for our return on the starboard tack, we were an eager, responsive complement to theRose's full-time crew. Paul Pennoyer' s class of East Harlem Maritim e We returned to South School students aboard the Rose on May 13 . Street around 4:00PM , in time to ready the Rose for the 5:00PM World Ship Trust Award ceremony to honor our guest of the day, Townsend Hornor. It was a fine day of fresh air and free spirits, a good day of sai ling, and for our young sailors , a day of learning with an 18thKEVIN HA YOON century twi st.

Association, which conducts college level courses aboard sail training vessels operating out of Woods Hole, Massachusetts, Mr. Isbrandtsen said: "At sea, the whole crew knows how their ship is being sai led. They know this going about their tasks on deck or even sleeping in their bunks below . They can feel a sure touch on the helm, as the vessel makes her way through the sea. And that sure touch Townie brought to SEA." Rafe Parker, President of SEA, in a letter to Mr. Hornor, detailed aspects of his leadership which had left a lasting and beneficial mark on the institution. In his letter Mr. Parker recalled how Mr. Hornor had said to him twelve years ago: "Rafe, I don't know how we 're going to do it, but we are going to have a campus

of our own and a new ship for ourselves that all of us will be proud of. " Which, Parker noted , was just what came to pass under Mr. Hornor's leadership. Peter Stanford, President of the National Maritime Historical Society, sponsors of the Ship Trust Award, said that Mr. Hornor was "a Renaissance man," whose interests "ranged from marine art to historic ship preservation, from the ways of the lobstermen in Nantucket Sound to the collections policy of Mystic Seaport Museum, where," he added, "he sits on a committee to oversee such things." "Town ie Hornor' s is the gift of the great navigators," said Stanford, "for whom no shore was too far. And he brings that generosity of vision to all he does in our field. " SEA HISTORY 70, SUMMER 1994