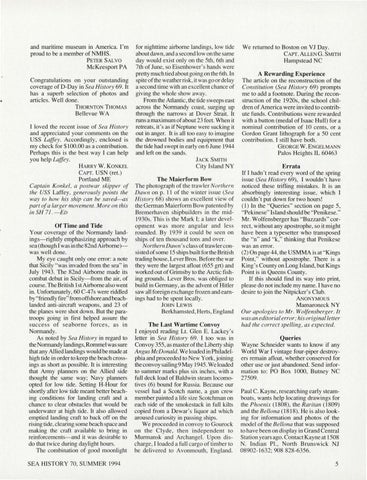 and maritime museum in America. I&#39;m proud to be a member of NMHS. PETER SALVO McKeesport PA Congratulations on your outstanding coverage of D-Day in Sea History 69. It has a superb selection of photos and articles. Well done. THORNTON THOMAS Bellevue WA I loved the recent issue of Sea History and appreciated your comments on the USS Laffey. Accordingly, enclosed is my check for $100.00 as a contribution. Perhaps thi s is the best way I can help you help Laffey. HARRY W. KONKEL CAPT. USN (ret.) Portland ME Captain Konkel, a postwar skipper of the USS Laffey, generously points the way to how his ship can be saved-as part of a larger movement. More on this in SH 71.-ED

Of Time and Tide Your coverage of the Normandy landings- rightly emphasizing approach by sea (though I was in the 82nd Airborne)was well done. My eye caught only one error: a note that Sicily &quot; was invaded from the sea&quot; in July 1943. The 82nd Airborne made its combat debut in Sicily- from the air, of course. The British 1st Airborne also went in. Unfortunately, 60 C-47s were riddled by &quot;friend Iy fire&quot; from offshore and beachlanded anti-aircraft weapons, and 23 of the planes were shot down. But the paratroops going in first helped assure the success of seaborne forces, as in Normandy. As noted by Sea History in regard to the Normandy landings, Rommel was sure that any Allied landings would be madeat high tide in order to keep the beach crossings as short as possible. It is interesting that Army planners on the Allied side thought the same way; Navy planners opted for low tide. Setting H-Hour for shortly after low tide meant better beaching conditions for landing craft and a chance to clear obstacles that would be underwater at high tide. It also allowed emptied landing craft to back off on the rising tide, clearing some beach space and making the craft available to bring in reinforcements-and it was desirable to do that twice during daylight hours. The combination of good moonlight SEA HISTORY 70, SUMMER 1994

for nighttime airborne landings, low tide about dawn, and a second low on the same day would ex ist only on the 5th, 6th and 7th of June, so Eisenhower &#39;s hands were pretty much tied about going on the 6th. In spite of the weather ri sk, it was go or delay a second time with an excellent chance of giving the whole show away. From the Atlantic, the tide sweeps east across the Normandy coast, surging up through the narrows at Dover Strait. It runs a maximum of about 23 feet. When it retreats, it&#39; s as if Neptune were sucking it out in anger. It is all too easy to imagine the drowned bodies and eq uipment that the tide had swept in early on 6 June 1944 and left on the sands. JACK SMITH City Island NY

The Maierform Bow The photograph of the trawler Northern Da wn on p. 11 of the winter issue (Sea History 68) shows an excellent view of the German Maierform Bow patented by Bremerhaven shipbuilders in the midI 930s. Thi s is the Mark I; a later development was more ang ul ar and less rounded. By 1939 it could be seen on ships of ten thousand ton s and over. Northern Dawn&#39;s class of trawler consisted of some 15 ships built for the British trading house, Lever Bros. Before the war they were the largest afloat (655 grt) and worked out of Grimsby to the Arctic fishing grounds. Lever Bros. was obliged to build in Germany, as the advent of Hitler saw all foreign exchange frozen and earnings had to be spent locally. JOHN LEWIS Berkhamsted, Herts, England

The Last Wartime Convoy I enjoyed reading Lt. Glen E. Lackey&#39;s letter in Sea History 69. I too was in Convoy 355, as master of the Liberty ship Angus McDonald. We loaded in Philadelphia and proceeded to New York, joining theconvoy sailing9May 1945. We loaded to summer marks plus six inches, with a full deck load of Baldwin steam locomotives (6) bound for Russia. Because our vessel had a Scotch name, a gun crew member painted a life size Scotchman on each side of the smokestack in full kilts copied from a Dewar&#39; s liquor ad which aroused curiosity in passing ships. We proceeded in convoy to Gourock on the Clyde, then independent to Murmansk and Archangel. Upon discharge, I loaded a full cargo of timber to be delivered to A vonmouth, England.

A Rewarding Experience The article on the reconstruction of the Constitution (Sea History 69) prompts me to add a footnote . During the reconstruction of the 1920s, the school children of America were invited to contribute fund s. Contributions were rewarded with a button (medal of Isaac Hull) for a nominal contribution of 10 cents, or a Gordon Grant lithograph for a 50 cent contribution . I still have both. GEORGE W. ENGELMANN Palos Heights IL 60463

Errata If I hadn &#39;t read every word of the spring issue (Sea History 69), I wouldn &#39; t have noticed these trifling mistakes. It is an absorbingly interesting issue, which I couldn &#39; t put down for two hours! (I) In the &quot;Queries&quot; section on page 5, &quot;Pekinese&quot; Island should be &quot;Penikese.&quot; Mr. Wolfensberger has &quot;Buzzards&quot; correct, without any apostrophe, so it might have been a typesetter who transposed the &quot; n&quot; and &quot;k,&quot; thinking that Penikese was an error. (2) On page 44, the USMMA is at &quot;Kings Point,&quot; without apostrophe. There is a King&#39; s County on Long Island, but Kings Point is in Queens County. If this should find its way into print, please do not include my name. I have no desire to join the Nitpicker&#39;s Club. ANONYMOUS Mamaroneck NY Our apologies to Mr. Wolfensberger. It was an editorial error; his original letter had the correct spelling, as expected.

Queries Wayne Schneider wants to know if any World War I vintage four-piper destroyers remain afloat, whether conserved for other use or just abandoned. Send information to : PO Box 1000, Butney NC 27509. Paul C. Kayne, researching early steamboats, wants help locating drawings for the Phoenix (1808) , the Raritan (1809) and the Bellona (1818). He is also looking for information and photos of the model of the Be Ilona that was supposed to have been on di splay in Grand Central Station years ago. Contact Kayne at 1508 N. Indi an Pl. , North Brunsw ick NJ 08902-1632; 908 828-6356. 5