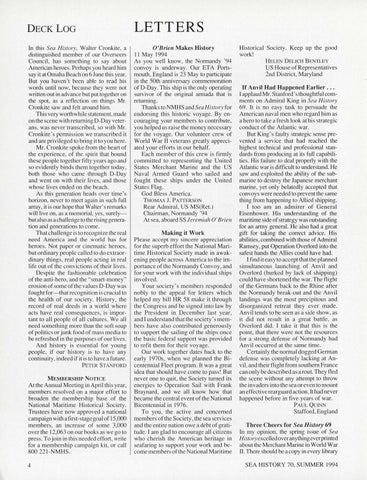 DECK LOG In this Sea History, Walter Cronkite, a distinguished member of our Overseers Council, has something to say about American heroes. Perhaps you heard him say it at Omaha Beach on 6 June this year. But you haven ' t been able to read his words until now, because they were not written out in advance but put together on the spot, as a reflection on things Mr. Cronkite saw and felt around him. This very worthwhile statement, made on the scene with returning D-Day veterans, was never transc ribed, so with Mr. Cronkite 's permission we transcribed it and are privileged to bring it to you here. Mr. Cronkite spoke from the heart of the experience, of the spirit that bound these people together fifty years ago and so evidently binds them together today , both those who came through D-Day and went on with their lives, and those whose lives ended on the beach. As this generation heads over time 's horizon, never to meet again in such full array, it is our hope that Walter's remarks will live on, as a memorial, yes, surelybut also as a challenge to the ri sing generation and generations to come. That challenge is to recognize the real need America and the world has for heroes. Not paper or cinematic heroes, but ordinary people called to do extraordinary things, real people acting in real life out of the convictions of their lives. Despite the fashionable celebration of the anti-hero, and the "smart-money" erosion of some of the values D-Day was fought for-that recognition is crucial to the health of our society. History , the record of real deeds in a world where acts have real consequences, is important to all people of all cultures. We all need something more than the soft soap of politics or junk food of mass media to be refreshed in the purposes of our lives. And hi story is essential for young people, if our history is to have any continuity, indeed if it is to have a future. PETER ST AN FORD

At the Annual Meeting in April this year, members resolved on a major effort to broaden the membership base of the National Maritime Historical Society. Trustees have now approved a national campaign with a first-stage goal of 15,000 members, an increase of some 3,000 over the 12,063 on our books as we go to press. To join in this needed effort, write for a membership campaign kit, or call 800 221-NMHS. 4

O'Brien Makes History 11May1994 As you well know, the Normandy '94 convoy is underway. Our ETA Portsmouth, England is 23 May to participate in the 50th anniversary commemoration ofD-Day. This ship is the only operating survivor of the original armada that is returning. Thanks to NMHS and Sea History for endorsing this historic voyage. By encouraging your members to contribute, you helped us raise the money necessary for the voyage. Our volunteer crew of World War II veterans greatly appreciated your efforts in our behalf. Each member of this crew is firmly committed to representing the United States Merchant Marine and the US Naval Armed Guard who sailed and fought these ships under the United States Flag. God Bless America. THOMAS J. PATTERSON Rear Admiral, US MS(Ret.) Chairman, Normandy '94 At sea, aboard SS Jeremiah O'Brien

Making it Work Please accept my sincere appreciation for the superb effort the National Maritime Historical Society made in awakening people across America to the importance of the Normandy Convoy , and for your work with the individual ships involved. Your society's members responded nobly to the appeal for letters which helped my bill HR 58 make it through the Congress and be signed into law by the President in December last year, and I understand that the society's members have also contributed generous ly to support the sailing of the ships once the basic federal support was provided to refit them for their voyage. Our work together dates back to the early 1970s, when we planned the Bicentennial Fleet program. lt was a great idea that should have come to pass! But never one to quit, the Society turned its energies to Operation Sail with Frank Braynard, and we all know how that became the central event of the National Bicentennial in 1976. To you, the active and concerned members of the Society, the sea services and the entire nation owe a debt of gratitude. I am glad to encourage all citizens who cherish the American heritage in seafaring to support your work and become members of the National Maritime

US House of Representatives 2nd District, Maryland If Anvil Had Happened Earlier .. . I applaud Mr. Stanford 's thoughtful comments on Adm iral King in Sea History 69. It is no easy task to persuade the American naval men who regard him as a hero to take a fresh look at hi s strategic conduct of the Atlantic war. But King' s fau lty strategic sense prevented a service that had reached the highest technical and professional standards from producing at its full capabilities. His failure to deal properly with the Atlantic war is difficult to understand. He saw and exploited the ability of the submarine to destroy the Japanese merchant marine, yet only belatedly accepted that convoys were needed to prevent the same thing from happening to Allied shipping. I too am an admirer of General Eisenhower. His understanding of the maritime side of strategy was outstanding for an army general. He also had a great gift for taking the correct advice. His abilities, combined with those of Admiral Ramsey, put Operation Overlord into the safest hands the Allies could have had. I find it easy to accept that the planned simultaneous launching of Anvil and Overlord (burked by lack of shipping) could have shortened the war. The flight of the Germans back to the Rhine after the Normandy break-out and the Anvil landings was the most precipitous and disorganized retreat they ever made. Anvil tends to be seen as a side show , as it did not result in a great battle, as Overlord did. I take it that this is the point, that there were not the resources for a strong defense of Normandy had Anvil occurred at the same time. Certain ly the normal dogged German defense was completely lacking at Anvil , and their flight from southern France can on! y be described as a rout. They fled the scene without any attempt to throw the invaders into the sea or even to mount an effective rearguard action. It had never happened before in five years of war. PAUL QUINN

Three Cheers for Sea History 69 In my opinion, the spring issue of Sea History excelled over anything ever printed about the Merchant Marine in World War II. There should be a copy in every library SEA HISTORY 70, SUMMER 1994