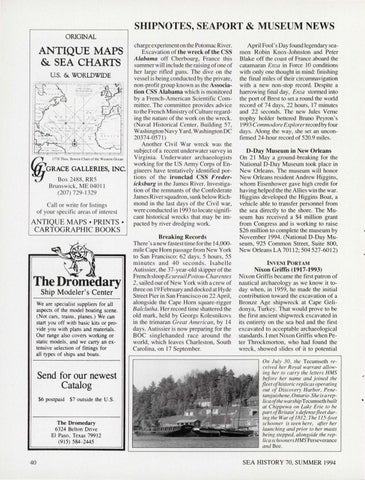 The Dromedary Ship Modeler&#39;s Center We are specialist suppliers for all aspects of the model boating scene. (Not cars, trains, planes.) We can start you off with basic kits or provide you with plans and materials. Our range also covers working or static models, and we carry an extensive selection of fittings for all types of ships and boats.

Send for our newest Catalog $6 postpaid $7 outside the U .S.

charge experiment on the Potomac River. Excavation of the wreck of the CSS Alabama off Cherbourg, France this summer will include the raising of one of her large rifled guns. The dive on the vessel is being conducted by the private, non-profit group known as the Association CSS Alabama which is monitored by a French-American Scientific Committee. The committee provides advice to the French Ministry of Culture regarding the nature of the work on the wreck. (Naval Historical Center, Building 57, Washington Navy Yard, Washington DC 20374-0571) Another Civil War wreck was the subject of a recent underwater survey in Virginia . Underwater archaeologists working for the US Army Corps of Engineers have tentatively identified portions of the ironclad CSS Fredericksburg in the James River. Investigation of the remnants of the Confederate James River squadron , sunk below Richmond in the last days of the Civil war, were conducted in 1993 to locate significant historical wrecks that may be impacted by river dredging work. Breaking Records There &#39;sa newfastesttimeforthe 14,000mile Cape Horn passage from New York to San Francisco: 62 days, 5 hours, 55 minutes and 40 seco nd s. Isabelle Autissier, the 37-year-old skipper of the French sloop Ecureuil Poitou-Charentes 2, sailed out of New York with a crew of three on 19 February and docked at Hyde Street Pier in San Francisco on 22 April, alongside the Cape Horn square-rigger Balclutha. Her record time shattered the old mark, held by Georgs Kolesnikovs in the trimaran Great American, by 14 days. Autissier is now preparing for the BOC singlehanded race around the world, which leaves Charleston, South Carolina, on 17 September.

April Fool&#39;s Day found legendary seamen Robin Knox-Johnston and Peter Blake off the coast of France aboard the catamaran Enza in Force 10 conditions with only one thought in mind: finishing the final miles of their circumnavigation with a new non-stop record. Despite a harrowing final day, Enza stormed into the port of Brest to set a round the world record of 74 days, 22 hours, 17 minutes and 22 seconds. The new Jules Verne trophy holder bettered Bruno Peyron&#39;s 1993 Commodore Explorerrecord by four days. Along the way, she set an unconfirmed 24-hour record of 520.9 miles. D-Day Museum in New Orleans On 21 May a ground-breaking for the National D-Day Museum took place in New Orleans. The museum will honor New Orleans resident Andrew Higgins , whom Eisenhower gave high credit for having helped the the Allies win the war. Higgins developed the Higgins Boat, a vehicle able to transfer personnel from the sea directly to the shore. The Museum has received a $4 million grant from Congress and is working to raise $26 million to complete the museum by November 1994. (National D-Day Museum, 925 Common Street, Suite 800, New Orleans LA 70112; 504527-6012) INVENI PORT AM

Nixon Griffis (1917-1993) Nixon Griffi s became the first patron of nautical archaeology as we know it today when , in 1959, he made the initial contribution toward the excavation of a Bronze Age shipwreck at Cape Gelidonya, Turkey. That would prove to be the first ancient shipwreck excavated in its entirety on the sea bed and the first excavated to acceptable archaeological standards. I met Nixon Griffis when Peter Throckmorton, who had found the wreck, showed slides of it to potential On July 30, the Tecumseth received her Royal warrant allowing her to carry the letters HMS before her name and joined the fl eet of historic replicas operating out of Discovery Harbor, Penetanguishene, Ontario. She is a replica ofthe warship Tecumseth built at Chippewa on Lake Erie to be part ofBritain&#39;s defense fleet during the War of 1812. The 115-foot &quot;-&quot;l&lt;.::l&#39;o-&#39;i schooner is seen here, after her launching and prior to her masts being stepped, alongside the replica schooners HMS Perseverance and Bee.