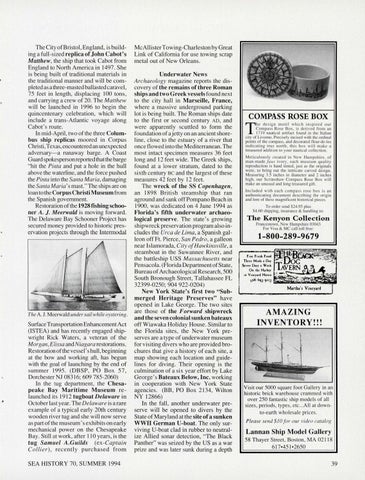 The City ofBristol , England, is building a full-sized replica of John Cabot&#39;s Matthew, the ship that took Cabot from England to North America in 1497. She is being built of traditional material s in the traditional manner and will be completed as a three-masted ballasted caravel, 75 feet in length, displac ing 100 tons, and carrying a crew of20. The Matthew will be launched in 1996 to begin the quincentenary celebration, which will include a trans-Atlantic voyage along Cabot&#39;s route. In mid-April, two of the three Columbus ship replicas moored in Corpus Christi , Texas, encountered an unexpected adversary- a runaway barge. A Coast Guard spokesperson reported that the barge &quot;hit the Pinta and put a hole in the hull above the waterline, and the force pushed the Pinta into the Santa Maria, damaging the Santa Maria &#39;s mast.&quot;The ships are on loan to the Corpus Christi Museum from the Spanish government. Restoration of the 1928 fishing schooner A. J. Meerwald is moving forward. The Delaware Bay Schooner Project has secured money provided to historic preservation projects through the Intermodal

The A. J. Meerwald under sail while oystering .

Surface Transportation Enhancement Act (ISTEA) and has recently engaged shipwright Rick Waters, a veteran of the Morgan, Elissa and Niagara restorations. Restoration of the vessel&#39;s hull, beginning at the bow and working aft, has begun with the goal of launching by the end of summer 1995 . (DBSP, PO Box 57 , Dorchester NJ 08316; 609 785-2060) In the tug department, the Chesapeake Bay Maritime Museum relaunched its 19 12 tugboat Delaware in October last year. The Delaware is a rare example of a typical early 20th century wooden river tug and she will now serve as part of the museum &#39;s exhibits on early mechanical power on the Chesapeake Bay. Still at work, after 110 years, is the tug Samuel A.Guilds (ex-Cap tain Co llier) , recently purchased from SEA HISTORY 70, SUMMER 1994

McAllister Towing-Charleston by Great Link of California for use towing scrap metal out of New Orleans. Underwater News Archaeology magazine reports the discovery of the remains of three Roman ships and two Greek vessels found next to the city hall in Marseille, France, where a massive underground parking lot is being built. The Roman ships date to the fi rst or second century AD, and were apparently scuttled to form the foundation of a jetty on an ancient shoreline, close to the estuary of a river that once flowed into the Mediterranean. The most intact specimen measures 36 feet long and 12 feet wide. The Greek ships, found at a lower stratum , dated to the sixth century BC and the largest of these measures 42 feet by 12 feet. The wreck of the SS Copenhagen, an 1898 British steamship that ran aground and sank off Pompano Beach in 1900, was dedicated on 4 June 1994 as Florida&#39;s fifth underwater archaeological preserve. The state &#39;s growing shipwreck preservation program also includes the Urea de Lima, a Spanish galleon off Ft. Pierce, San Pedro , a galleon near Islamorada, City of Hawkinsville, a steamboat in the Suwannee River, and the battleship USS Massachusetts near Pensacola. (Florida Department of State, Bureau of Archaeological Research , 500 South Bronough Street, Tallahassee FL 32399-0250; 904 922-0204) New York State&#39;s first two &quot;Submerged Heritage Preserves&quot; have opened in Lake George. The two sites are those of the Forward shipwreck and the seven colonial sunken bateaux off Wiawaka Holiday House. Similar to the Florida sites, the New York preserves are a type of underwater museum for visiting divers who are provided broch ures that give a history of each site, a map showing each location and guidelines for diving. Their opening is the culmination of a six year effort by Lake George&#39;s Bateaux Below, Inc. working in cooperation with New York State agencies. (BB , PO Box 2 134, Wilton NY 12866) In the fall, another underwater preserve will be opened to divers by the State of Maryland at the site of a sunken WWII German U-boat. The only surviving U-boat clad in rubber to neutralize Allied sonar detection , &quot;The Black Panther&quot; was seized by the US as a war prize and was later sunk during a depth

Visit our 5000 squ are foot Ga llery in an historic brick warehouse crammed with over 250 fantastic ship models of all sizes , peri ods, types, etc .. .All at downto-earth wholesale prices.