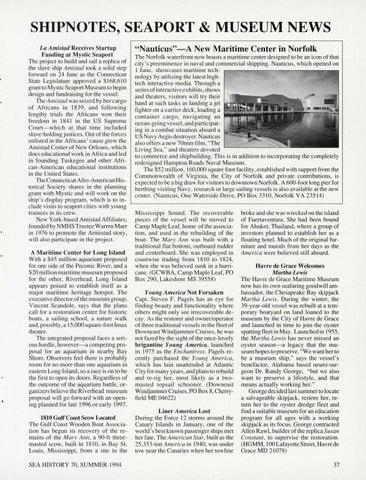 SHIPNOTES, SEAPORT &amp; MUSEUM NEWS La Amistad Receives Startup Funding at Mystic Seaport The project to build and sail a replica of the slave ship Amistad took a solid step forward on 24 June as the Connecticut State Legislature approved a $168,610 grant to Mystic Seaport Museum to begin design and fundraising for the vessel. The Amis tad was seized by her cargo of Africans in 1839, and following lengthy trials the Africans won their freedom in I 841 in the US Supreme Court-which at that time included slave-holding justices. Out of the forces enlisted in the Africans&#39; cause grew the Amis tad Center of New Orleans, which does educational work in Africa and led in founding Tuskegee and other African-American educational institutions in the United States. The Connecticut Afro-American Historical Society shares in the planning grant with Mystic and will work on the ship&#39;s display program, which is to include visits to seaport cities with young trainees in its crew. New York-based Amistad Affiliates, founded by NMHS Trustee Warren Marr in 1976 to promote the Arrnistad story, will also participate in the project. A Maritime Center for Long Island With a $45 million aquari um proposed for one side of the Peconic River, and a $20 million maritime museum proposed for the other, Riverhead, Long Island appears poised to establish itself as a major maritime heritage hotspot. The executive director of the museum group, Vincent Scandole, says that the plans call for a restoration center for historic boats, a sailing school, a nature walk and, possibly,a 15 ,000square-footimax theater. The integrated proposal faces a serious hurdle, however-a competing proposal for an aquarium in nearby Bay Shore. Observers feel there is probably room for no more than one aquarium in eastern Long Island, so a race is on to be the first to open its doors. Regardless of the outcome of the aquarium battle, organizers believe the Riverhead museum proposal will go forward with an opening planned for late 1996 or early 1997.

1810 Gulf Coast Scow Located The Gulf Coast Wooden Boat Association has begun its recovery of the remains of the Mary Ann, a 90-ft threemasted scow, built in 1810, in Bay St. Louis, Mississippi, from a site in the SEA HISTORY 70, SUMMER 1994

&quot;Nauticus&quot;-A New Maritime Center in Norfolk The Norfolk waterfront now boasts a maritime center designed to be an icon of that city&#39;s preeminence in naval and commercial shipping. Nauticus , which opened on 1 June, showcases maritime technology by utilizing the latest hightech interactive media. Through a series of interactive exhibits, shows and theaters, visitors will try their hand at such tasks as landing a jet fighter on a carrier deck, loading a container cargo, navigating an ocean-going vessel, and participating in a combat situation aboard a US Navy Aegis destroyer. Nauticus also offers a new 70mm film , &quot;The Living Sea,&quot; and theaters devoted to commerce and shipbuilding. This is in addition to incorporating the completely redesigned Hampton Roads Naval Museum. The $52 million, 160,000 square foot facility, established with support from the Commonwealth of Virginia, the City of Norfolk and private contributions, is expected to be a big draw for visitors to downtown Norfolk. A 600-foot long pier for berthing visiting Navy, research or large sailing vessels is also available at the new center. (Nauticus, One Waterside Drive, PO Box 3310, Norfolk VA 23514) Mississippi Sound. The recoverable pieces of the vessel will be moved to Camp Maple Leaf, home of the association, and used in the rebuilding of the boat. The Mary Ann was built with a traditional flat bottom, outboard rudder and centerboard. She was employed in coastwise trading from 1810 to 1824, when she was believed sunk in a hurricane. (GCWBA, Camp Maple Leaf, PO Box 290, Lakeshore MS 39558)

Young America Not Forsaken Capt. Steven F. Pagels has an eye for finding beauty and functionality where others might only see irrecoverable decay. As the restorer and owner/operator of three traditional vessels in the fleet of Downeast Windjammer Cruises, he was not fazed by the sight of the once-Jovel y brigantine Young America, launched in 1975 as the Enchantress. Pagels recently purchased the Young America, which has lain unattended at Atlantic City for many years, and plans to rebuild and re-rig her, most likely as a twomasted topsail schooner. (Downeast Windjammer Cruises, PO Box 8, Cherryfield ME 04622) Liner America Lost During the Force 12 storms around the Canary Islands in January, one of the world &#39;s best known passenger ships met her fate . The American Star, built as the 25,353-ton America in 1940, was under tow near the Canaries when her towline

broke and she was wrecked on the island of Fuertaventura. She had been bound for Ahuket, Thailand, where a group of investors planned to establish her as a floating hotel. Much of the original furniture and murals from her days as the America were believed still aboard. Havre de Grace Welcomes Martha Lewis The Havre de Grace Maritime Museum now has its own seafaring goodwill ambassador, the Chesapeake Bay skipjack Martha Lewis. During the winter, the 39-year-old vessel was rebuilt at a temporary boatyard on land loaned to the museum by the City of Havre de Grace and launched in time to join the oyster spattingfleetinMay . Launched in 1955, the Martha Lewis has never missed an oyster season-a legacy that the museum hopes to preserve. &quot;We want her to be a museum ship,&quot; says the vessel&#39;s benefactor, Alabama based neuro-surgeon Dr. Randy George, &quot;but we also want to preserve a lifestyle, and that means actually working her. &quot; George decided last summer to locate a salvageable skipjack, restore her, return her to the oyster dredge fleet and find a suitable museum for an education program for all ages with a working skipjack as its focus. George contracted Allen Rawl, builder of the replica Susan Constant, to supervise the restoration. (HGMM, 100 Lafayette Street, Havre de Grace MD 21078) 37