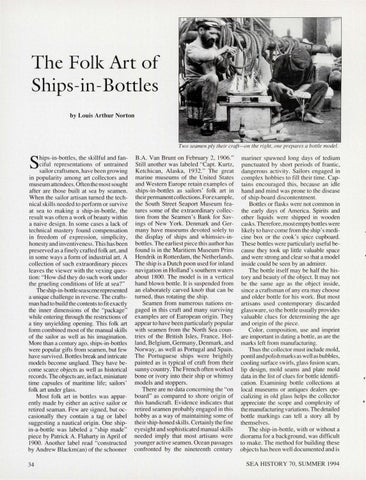 The Foll( Art of Ships-in-Bottles by Louis Arthur Norton

Two seamen ply their craft-on the right , one prepares a bottle model.

hips-in-bottles, the skillful and fanc iful representations of untrained sailor craftsmen, have been growing in popularity among art collectors and museum attendees . Often the most sought after are those built at sea by seamen . When the sailor arti san turned the technical skills needed to perform or survive at sea to making a ship-in-bottle, the result was often a work of beauty with in a naive design. In some cases a lack of technical mastery found compensation in freedom of expression, simplicity, honesty and inventiveness. This has been preserved as a finely crafted folk art, and in some ways a form of industrial art. A collection of such extraordinary pieces leaves the viewer with the vexing question: " How did they do such work under the grueling conditions of life at sea?" Theship-in-bottle seascenerepresented a unique challenge in reverse. The craftsman had to build the contents to fit exactly the inner dimensions of the "package" whi le entering through the restrictions of a tiny unyielding opening. This folk art form combined most of the manual skills of the sailor as well as his imag ination. More than a century ago, ships-in-bottles were popular gifts from seamen, but few have survived. Bottles break and intricate models become unglued. They have become scarce objects as well as historical records. The objects are, in fact, miniature time capsules of maritime life; sailors' folk art under glass. Most folk art in bottles was apparently made by either an active sai lor or retired seaman . Few are signed , but occasionally they contain a tag or label suggesting a nautical origi n. One shipin-a-bottle was labeled a "ship made" piece by Patrick A. Flaharty in April of 1900. Another label read "constructed by Andrew Blackm(an) of the schooner

B.A. Van Brunt on February 2, 1906." Still another was labeled "Capt. Kurtz, Ketchican , Alaska, 1932." The great marine museums of the United States and Western Europe retain examples of ships-in-bottles as sailors' folk art in theirpermanentcollections. Forexarnple, the South Street Seaport Museum features some of the extraord inary collection from the Seamen 's Bank for Savings of New York. Denmark and Germany have museums devoted solely to the display of ships and whimsies-inbottles. The earliest piece thi s author has found is in the Maritiem Museum Prins Hendrik in Rotterdam, the Netherlands. The ship is a Dutch poon used for inland navigation in Holland 's southern waters about 1800. The model is in a vertica l hand blown bottle. It is suspended from an elaborate ly carved knob that can be turned, thus rotating the ship. Seamen from numerous nations engaged in thi s craft and many surviving examples are of European origin. They appear to have been particularly popular with seamen from the North Sea countries of the British Isles, France, Holland, Belgium, Germany, Denmark, and Norway , as well as Portugal and Spain. The Portuguese ships were brightl y painted as is typical of craft from their sunny country. The French often worked bone or ivory into their ship or whimsy models and stoppers. There are no data concerning the "on board" as compared to shore origin of this handicraft. Evidence indicates that retired seamen probably engaged in this hobby as a way of maintaining some of their ship-honed skill s. Certainly the fine eyesight and sophi sticated manual skills needed imply that most artisans were younger active seamen. Ocean passages confronted by the nineteenth century

mariner spawned long days of tedium punctuated by short periods of franti c, dangerous activity. Sailors engaged in complex hobbies to fi ll their time. Captains encouraged thi s, because an id le hand and mind was prone to the di sease of ship-board discontentment. Bottles or flasks were not common in the early days of America. Spirits and other liquids were shipped in wooden casks. Therefore, most empty bottles were likely to have come from the ship 's medicine box or the cook 's spice cupboard. These bottles were particularly useful because they took up little valuable space and were strong and clear so that a model inside could be seen by an admirer. The bottle itself may be half the history and beauty of the object. It may not be the same age as the object inside, since a craftsman of any era may choose and older bottle for hi s work. But most artisans used contemporary di scarded glassware, so the bottle usually provides valuable clues for determining the age and origin of the piece. Color, composition , use and imprint are important in dating a bottle, as are the marks left from manufacturing. Thus the collector must include mold, ponti l and polish marks as well as bubbles, cooling surface swirls, glass fu sion scars, lip design, mold seams and plate mold data in the list of clues for bottle identification. Examini ng bottle collections at local museums or antiques dealers specializing in o ld glass helps the collector appreciate the scope and complex ity of the manufacturing variations. The detailed bottle markings can tell a story all by themselves. The ship-in-bottle, with or without a diorama for a background, was difficult to make. The method for building these objects has been well documented and is SEA HISTORY 70, SUMMER 1994