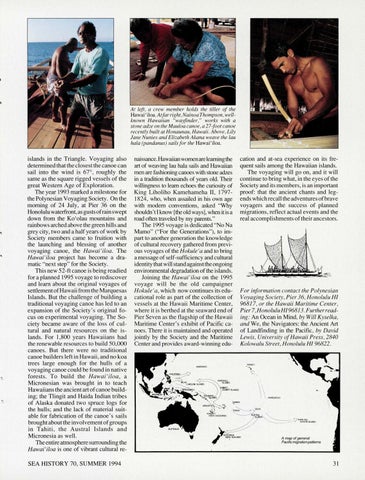 At left, a crew member holds the tiller of the Hawai ' iloa.Atfarright,NainoaThompson, wellknown Hawaiian "wayfinder," works with a stone adze on the Mau/oa canoe, a 27joot canoe recently built at Honaunau , Hawaii. Above, Lily Jane Nunies and Elizabeth Akana weave the /au ha/a (pandanus) sails for the Hawai'iloa.

islands in the Triangle. Voyaging also determined that the closest the canoe can sail into the wind is 67 Â°, roughly the same as the square rigged vessels of the great Western Age of Exploration. The year 1993 marked a milestone for the Polynesian Voyaging Society. On the morning of 24 July, at Pier 36 on the Honolulu waterfront, as gusts ofrain swept down from the Ko'olau mountains and rainbows arched above the green hills and grey city, two and a half years of work by Society members came to fruition with the launching and blessing of another voyaging canoe, the Hawai'iloa. The Hawai'iloa project has become a dramatic "next step" for the Society. This new 52-ft canoe is being readied for a planned 1995 voyage to rediscover and learn about the original voyages of settlementofHawaii from the Marquesas Islands. But the challenge of building a traditional voyaging canoe has led to an expansion of the Society's original focus on experimental voyaging. The Society became aware of the loss of cultural and natural resources on the islands. For 1,800 years Hawaiians had the renewable resources to build 50,000 canoes. But there were no traditional canoe builders left in Hawaii, and no koa trees large enough for the hulls of a voyaging canoe could be found in native forests. To build the Hawai'iloa , a Micronesian was brought in to teach Hawaiians the ancient art of canoe building; the Tlingit and Haida Indian tribes of Alaska donated two spruce logs for the hulls; and the lack of material suitable for fabrication of the canoe's sails brought about the involvement of groups in Tahiti, the Austral Islands and Micronesia as well. The entire atmosphere surrounding the Hawai'iloa is one of vibrant cultural reSEA HISTORY 70, SUMMER 1994

men are fashioning canoes with stone adzes in a tradition thousands of years old. Their willingness to learn echoes the curiosity of King Liholiho Kamehameha II , 17971824, who, when assailed in his own age with modem conventions, asked "Why shouldn'tlknow [the old ways], when it is a road often traveled by my parents." The 1995 voyage is dedicated "No Na Mamo" ("For the Generations"), to impart to another generation the knowledge of cultural recovery gathered from previous voyages of the H okule 'a and to bring a message of self-sufficiency and cultural identity that will stand against the ongoing environmental degradation of the islands. Joining the Hawai'iloa on the 1995 voyage will be the old campaigner Hokule'a, which now continues its educational role as part of the collection of vessels at the Hawaii Maritime Center, where it is berthed at the seaward end of Pier Seven as the flagship of the Hawaii Maritime Center's exhibit of Pacific canoes. There it is maintained and operated jointly by the Society and the Maritime Center and provides award-winning edu-

cation and at-sea experience on its frequent sails among the Hawaiian islands. The voyaging will go on, and it will continue to bring what, in the eyes of the Society and its members, is an important proof: that the ancient chants and legends which recall the adventures of brave voyagers and the success of planned migrations, reflect actual events and the real accomplishments of their ancestors.

For information contact the Polynesian Voyaging Society, Pier 36, Honolulu HI 96817, or the Hawaii Maritime Center, Pier 7, Honolulu HI 96813 . Further reading: An Ocean in Mind, by Will Kyselka, and We, the Navigators: the Ancient Art of Landfinding in the Pacific, by David Lewis, University of Hawaii Press, 2840 Kolowalu Street, Honolulu HI 96822 .