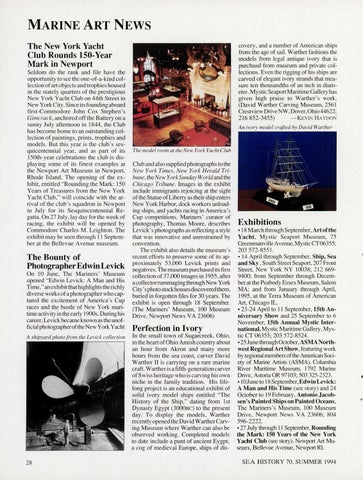 MARINE ART NEWS The New York Yacht Club Rounds 150-Year Mark in Newport Seldom do the rank and file have the opportunity to see the one-of-a-kind collection of art objects and trophies housed in the stately quarters of the prestigious New York Yacht Club on 44th Street in New York City. Since its founding aboard first-Commodore John Cox Stephen &#39; s Gimcrack, anchored off the Battery on a sunny July afternoon in 1844, the Club has become home to an outstanding collection of paintings, prints, trophies and models. But this year is the club &#39;s sesquicentennial year, and as part of its I 50th-year celebrations the club is displaying some of its finest examples at the Newport Art Museum in Newport, Rhode Island. The opening of the exhibit, entitled &quot;Rounding the Mark: 150 Years of Treasures from the New York Yacht Club,&quot; will coincide with the arrival of the club &#39;s squadron in Newport in July for its Sesquincentennial Regatta. On 27 July , lay day forthe week of racing, the exhibit will be opened by Commodore Charles M. Leighton. The exhibit may be seen through 11 September at the Bellevue Avenue museum.

The Bounty of Photographer Edwin Levick On 10 June, The Mariners&#39; Museum opened &quot;Edwin Levick: A Man and His Time,&quot; an exhibit that highlights the richly diverse works of a photographer who captured the excitement of America &#39; s Cup races and the bustle of New York maritime activity in the early 1900s. During his career, Levick became known as the unofficial photographerof the New York Yacht A shipyard photo from the Levick collection

covery, and a number of American ships from the age of sail. Warth er fashions the models from legal antique ivory that is purchasd from museum and private collections. Even the rigging of his ships are carved of elegant ivory strands that measure ten thousandths of an inch in diameter. Mystic Seaport Maritime Gallery has given high praise to Warther&#39; s work . (David Warther Carving Museum , 2561 Crestview DriveNW,Dover, Ohio44622; -KEVIN H AY DON 216 852-3455) An ivory model crafted by David Warther

The model room at the New York Yacht Club

Club and also supplied photographs to the New York Times, New York Herald Tribune, the New York Sunday World and the Chicago Tribune. Images in the exhibit include immigrants rejoicing at the sight of the Statue of Liberty as their ship enters New York Harbor, dock workers unloading ships, and yachts racing in America &#39;s Cup competitions. Mariners &#39; curator of photography, Thomas Moore, describes Levick &#39;s photographs as reflecting a style that was innovative and unrestrained by convention. The exhibit also details the museum&#39; s recent efforts to preserve some of its approximately 53,000 Levick prints and negatives. The museum purchased its first collection of37 ,000 images in 1955, after a collector rummaging through New York City &#39;s photo stock houses discovered them, buried in forgotten files for 30 years. The exhibit is open through 18 September. (The Mariners&#39; Museum, l 00 Museum Drive, Newport News VA 23606)

Perfection in Ivory In the small town of Sugarcreek, Ohio, in the heart of Ohio Amish country about an hour from Akron and many more hours from the sea coast, carver David Warther II is carrying on a rare marine craft. Warther is a fifth-generation carver of Swiss heritage who is carving his own niche in the family tradition. His lifelong project is an educational exhibit of solid ivory model ships entitled &quot;The History of the Ship,&quot; dating from l st Dynasty Egypt (3000BC) to the present day . To display the models, Warther recently opened the David WartherCarving Museum where Warther can also be observed working. Completed models to date include a punt of ancient Eygpt, a cog of medieval Europe, ships of dis-