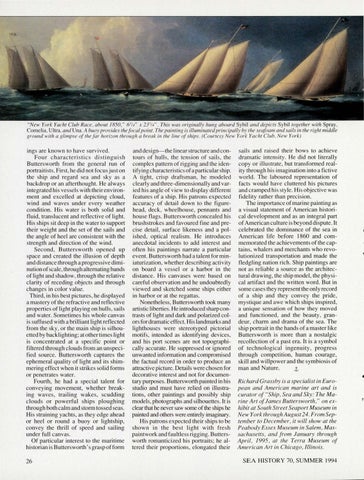 "New York Ya ch! Club Race , aboul 1850 ," 6314'' x 23 3/ 4". This was originally hung aboard Sybil and depicls Sybil loge/her with Spray, Cornelia, Ultra, and Una. A buoy provides !he foca l poinl. The pain ling is illumina1ed principally by !he seafoam and sails in !he rig hi middle ground wilh a glimpse of 1hefar horizon lhrough a break in 1he line of ships. (Co urlesy New York Ya ch/ Club , New York)

ings are known to have survived . Four characteristics di s tin g ui s h Buttersworth from the general run of portraiti sts. First, he did not focu s just on the ship and regard sea and sky as a backdrop or an afterthought. He always integrated hi s vessels with their environ ment and excelled at depicting cloud , wind and waves under every weather condition. Hi s water is both solid and fluid , translucent and reflective of light. His ships sit deep in the water to support their we ight and the set of the sails and the angle of heel are consistent with the strength and direction of the wind. Seco nd , Butterswo rth opened up space and created the illusion of depth and di stance through a progressive dimi nution of scale, through alternating bands of light and shadow, through the relative clarity of receding objects and through changes in color value. Third , in hi s best pictures, he di splayed a mastery of the refractive and reflective properties of light playing on hull s, sail s and water. Sometimes his whole canvas is suffused with a brilliant light reflected from the sky , or the main ship is silhouetted by backlighting; at other times light is concentrated at a specific point or filtered through clouds from an unspecified source. Buttersworth captures the ephemeral quality of light and its shimmering effect when it strikes solid form s or penetrates water. Fourth , he had a special talent for conveying movement, whether breaking waves, trailing wakes , scudding cloud s or powerful ships ploughing through both calm and storm tossed seas. Hi s straining yachts , as they edge ahead or heel or round a buoy or lightship, convey the thrill of speed and sailing under full canvas. Of particular interest to the maritime hi storian is Butters worth 's grasp of form

and design- the linear structure and contours of hull s, the tension of sail s, the complex pattern of rigging and the identifying characteristics of a particular ship. A tight, crisp draftsman, he modeled clearly and three-dimen sionall y and varied hi s angle of view to di splay different features of a ship. Hi s patrons expected accuracy of detail down to the fi gurehead, deck, wheelhouse, pennants and house flags. Buttersworth concealed his brushstrokes and favoured fine and precise detail , surface likeness and a polished, optical reali sm. He introduces anecdotal incidents to add interest and often hi s paintings narrate a parti cular event. Butters worth had a talent for miniaturization, whether describing activity on board a vessel or a harbor in the di stance. His canvases were based on careful observation and he undoubtedly viewed and sketched some ships either in harbor or at the regattas. Nonetheless, Buttersworth took many artistic liberties. He introduced sharp contrasts of light and dark and polarized colors for dramatic effect. Hi s landmarks and lighthouses were stereotyped pictorial motifs, intended as identifying dev ices, and his port scenes are not topographically accurate. He suppressed or ignored unwanted information and compromised the factual record in order to produce an attractive picture. Details were chosen for decorative interest and not for documentary purposes. Buttersworth painted in his studio and must have relied on illustrations, other paintings and possibly ship models, photographs and silhouettes. It is clear that he never saw some of the ships he painted and others were entirely imaginary. His patrons expected the ir ships to be shown in the bes t li g ht with fresh paintwork and faultless ri gging. Buttersworth romanticized hi s portraits; he altered their proportions, elongated their

sail s and rai sed their bows to achieve dramatic intensity. He did not literally copy or illustrate, but transformed reality through hi s imag ination into a fictive world . The labo ured representation of facts would have cluttered his pictures and cramped hi s style. Hi s objective was fide lity rather than precision. The importance of marine painting as a visual statement of American hi storical development and as an integral part of American culture is beyond di spute. It celebrated the dominance of the sea in American life before 1860 and commemorated the achievements of the captai ns, whalers and merchants who revolutionized tran sportation and made the fledgling nation rich. Ship paintings are not as re liable a source as the architectural drawing, the ship model , the physical artifact and the written word. But in some cases they represent the only record of a ship and they convey the pride, mystique and awe which ships inspired , a unique sensation of how they moved and functioned, and the beauty, grandeur, charm and drama of the sea. The ship portrait in the hands of a master like Buttersworth is more than a nostalgic recollection of a past era. It is a symbol of tec hnol og ica l ingenuity, progress through competi tion , human courage, skill and willpower and the symbiosis of man and Nature. J,

Richard Grassby is a specialist in European and American marine art and is curator of "Ship , Sea and Sky : The Marine Art of James Buttersworth," on exhibit at South Street Seaport Museum in New YorkthroughAugust24. From September to December, it will show at the Peabody Essex Museum in Salem, Massachusetts, and from January through April, 1995, at the Terra Museum of American Art in Chicago, Illinois . SJEA HISTORY 70, SUMMER 1994