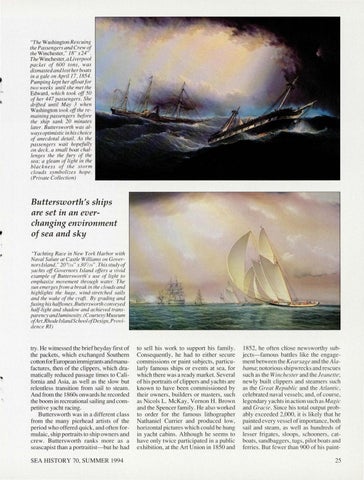 "The Washington Rescuing the Passengers and Crew of the Winchester," 18" x 24". The Winchester, a Liverpool packet of 600 tons , was dismasted and lost her boats in a gale on April 17, 1854. Pumping kept her afloat for two weeks until she met the Edward , which took off 50 of her 447 passengers. She drifted until May 3 when Washington took off the remaining passengers before the ship sank 20 minutes later. Buttersworth was always optimistic in his choice of anecdotal detail. As the passengers wait hopefully on deck, a small boat challenges the the fury of the sea; a gleam of light in the bla c kn ess of th e s torm clouds symbo lizes hope. (Private Collection)

Buttersworth's ships are set in an everchanging environment of sea and sky " Ya chting Race in New York Harbor with Naval Salute at Castle Williams on Governors Island," 20 9116" x30 7l t6 " . This srudyof yachts off Governors Island offers a vivid example of Buttersworth' s use of lighr ro emphasize movement through water. Th e sun emerges from a break in the clouds and highlights the huge, wind-stretched sails and the wake of the craft. By grading and fusin g his halftones, Buttersworth conveyed half-light and shadow and achieved rransparency and luminosity. (Courtesy Museum ofArr, Rhode Island School ofDesign, P rovidence RI )

try. He witnessed the brief heyday first of the packets, which exchanged Southern cotton for European immigrants and manufactures, then of the clippers, which dramatically reduced passage times to California and Asia, as well as the slow but relentless transition from sail to steam. And from the 1860s onwards he recorded the boom in recreational sailing and competitive yacht racing. Buttersworth was in a different c lass from the many pierhead artists of the period who offered quick, and often formulaic, ship portraits to ship owners and crew. Buttersworth ranks more as a seascapist than a portraitist-but he had SEA HISTORY 70, SUMMER 1994

to sell hi s work to support hi s family. Consequently , he had to either secure commi ssions or paint subjects, particularly famous ships or events at sea, for which there was a ready market. Several of his portraits of clippers and yachts are known to have been commissioned by their owners , builders or masters, such as Nicols L. McKay , Vernon H. Brown and the Spencer family . He al so worked to order for the famou s lithographer Nathaniel Currier and produced low, horizontal pictures which cou ld be hung in yacht cabins. Although he seems to have only twice partic ipated in a public exhibition , at the Art Union in 1850 and

1852, he often cliose newsworthy subjects-famous battles like the engagement between the K earsage and the Alabama; notorious shipwrecks and rescues such as the Win chester and the Jeanette; newly built c lippers and steamers such as the Great Republic and the Atlantic, ce lebrated naval vessels; and, of course, legendary yachts in action such as Magic and Gracie. Since hi s total output probably exceeded 2,000, it is likely that he painted every vessel of importance, both sail and steam , as well as hundreds of lesser frigates, sloops, schooners, catboats, sandbaggers, tugs, pilot boats and ferr ies. But fewer than 900 of hi s paint25