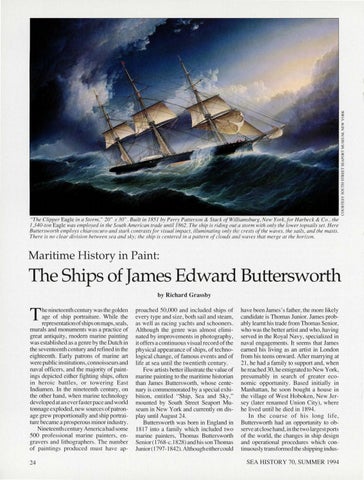 "The Clipper Eagle in a Storm," 20" x 30". Built in 1851 by Perry Patterson & Stack of Williamsburg, New York,for Harbeck & Co., the 1 ,340-ton Eagle was employed in the South American trade until 1862. Th e ship is riding out a storm with only the lower topsails set. Here Buttersworth employs chiaroscuro and stark contrasts fo r visual impact, illuminating only the crests of the wa ves, the sails, and the masts. There is no clear division between sea and sky; the ship is centered in a pattern of clouds and waves that merge at the horizon.

he nineteenth century was the golden age of ship portraiture. While the representation of ships on maps, seals, murals and monuments was a practice of great antiquity, modem marine painting was established as a genre by the Dutch in the seventeenth century and refined in the eighteenth . Earl y patrons of marine art were public institutions, connoisseurs and naval officers, and the majority of paintings depicted either fi ghting ships, often in he roi c battl es, o r to werin g East Indiamen. In the nineteenth century, on the other hand, when marine technology developed at an ever fas ter pace and world tonnage exploded, new sources of patronage grew proportionally and ship portraiture became a prosperous minor industry. Nineteenth century America had some 500 profess iona l marine painters, engravers and lithographers. The number of paintings produced must have ap24

proached 50,000 and included ships of every type and size, both sail and steam , as well as racing yachts and schooners. Although the genre was almost eliminated by improvements in photograph y, it offers a continuous visual record of the physical appearance of ships, of technological change, of famous events and of life at sea until the twentieth century. Few artists better illustrate the value of marine painting to the maritime historian than James Buttersworth , whose centenary is commemorated by a special exhibition , entitled " Ship, Sea and Sky," mounted by South Street Seaport Museum in New York and current) y on display until August 24. Butterswo1t h was born in England in 1817 into a family which included two marine painters, Thomas Buttersworth Senior ( 1768-c. l 828) and hi s son Thomas Junior ( l 797- 1842). Although eithercould

have been James's father, the more likely candidate is Thomas Junior. James probably learnt his trade from Thomas Senior, who was the better artist and who, having served in the Royal Navy , speciali zed in naval engagements. It seems that James earned his living as an arti st in London from his teens onward. After marrying at 2 1, he had a famil y to support and, when he reached 30, he emigrated to New York, presumabl y in search of greater economic opportunity. Based initiall y in Manhattan, he soon bought a house in the vill age of West Hoboken, New Jersey (l ater renamed Union City), where he lived until he died in 1894. In th e co urse of hi s lo ng life, Buttersworth had an opportunity to observe at close hand, in the two largest ports of the world, the changes in ship design and operational procedures which continuously transformed the shipping ind usSEA HISTORY 70, SUMMER 1994