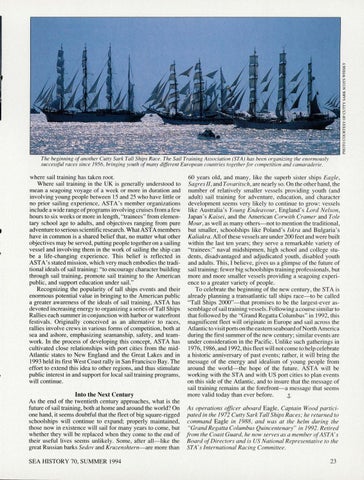 The beginning of another Cutty Sark Tall Ships Race. The Sail Training Association (STA) has been organizing the enormously successful races since 1956, bringing youth of many different European countries together for competition and camaraderie.

where sail training has taken root. Where sail training in the UK is generall y understood to mean a seagoing voyage of a week or more in duration and involving young people between 15 and 25 who have little or no prior sailing experience, ASTA&#39;s member organizations include a wide range of programs involving crui ses from a few hours to six weeks or more in length, &quot;trainees&quot; from elementary school age to adults, and objectives ranging from pure adventure to serious scientific research. What ASTA members have in common is a shared belief that, no matter what other objectives may be served, putting people together on a sai ling vessel and involving them in the work of sailing the ship can be a life-changing experience. This belief is reflected in AST A &#39;s stated mission, which very much embodies the traditional ideals of sail training: &quot;to encourage character building through sail training, promote sail training to the American public, and support education under sail.&quot; Recogni zing the popularity of tall ships events and their enormous potential value in bringing to the American public a greater awareness of the ideals of sail training, ASTA has devoted increasing energy to organizing a series of Tall Ships Rallies each summer in conjunction with harbor or waterfront festivals. Originally conceived as an alternative to races, rallies involve crews in various forms of competition, both at sea and ashore, emphasizing seamanship, safety, and teamwork. In the process of developing this concept, ASTA has cultivated close relationships with port cities from the midAtlantic states to New England and the Great Lakes and in 1993 held its first West Coast rally in San Francisco Bay. The effort to extend this idea to other regions, and thus stimulate public interest in and support for local sail training programs, will continue. Into the Next Century As the end of the twentieth century approaches, what is the future of sail training, both at home and around the world? On one hand, it seems doubtful that the fleet of big square-rigged schoolships will continue to expand; properly maintained, those now in existence will sail for many years to come, but whether they will be replaced when they come to the end of their useful lives seems unlikely. Some, after all-like the great Russian barks Sedov and Kruzenshtern-are more than SEA HISTORY 70, SUMMER 1994

60 years old, and many, like the superb sister ships Eagle, Sag res II , and Tovaritsch , are nearly so. On the other hand, the number of relatively smaller vessels providi ng youth (and adult) sai l training for adventure, education, and character development seems very likely to continue to grow: vessels like Australia &#39;s Young Endeavour, England &#39;s Lord Nelson, Japan &#39;s Kaisei, and the American Corwith Cramer and Tole Mour , as well as many others-not to mention the traditional, but smaller, schoolships like Poland&#39;s Iskra and Bulgaria&#39;s Kaliakra. All of these vessels are under 200 feet and were built within the last ten years; they serve a remarkable variety of &quot;trainees :&quot; naval midshipmen, high school and college students, disadvantaged and adjudicated youth , di sabled youth and adults. This, I believe, gives us a glimpse of the future of sail training: fewer big schoolships training professionals, but more and more smaller vessels providing a seagoing experience to a greater variety of people. To celebrate the beginning of the new century, the ST A is already planning a transatlantic tall ships race-to be called &quot;Tall Ships 2000&quot;-that promises to be the largest-ever assemblage of sail training vessels. Following a course similar to that followed by the &quot;Grand Regatta Columbus&quot; in 1992, this magnificent fl eet will originate in Europe and sai l across the Atlantic to visit ports on the eastern seaboard of North America during the first summer of the new century; similar events are under consideration in the Pacific. Unlike such gatherings in 1976, 1986, and 1992, thi s fl eet will not come to help celebrate a historic anniversary of past events; rather, it will bring the message of the energy and idealism of young people from around the world-the hope of the future . AST A will be working with the ST A and with US port cities to plan events on this side of the Atlantic, and to insure that the message of sail training remains at the forefront-a message that seems more valid today than ever before. ,t

As operations officer aboard Eagle, Captain Wood participated in the 1972 Cutty Sark Tall Ships Races; he returned to command Eagle in 1988, and was at the helm during the &quot;Grand Regatta Columbus Quincentenary&quot; in 1992 . Retired from the Coast Guard, he now serves as a member of ASTA&#39; s Board of Directors and is US National Representative to the STA&#39; s International Racing Committee . 23