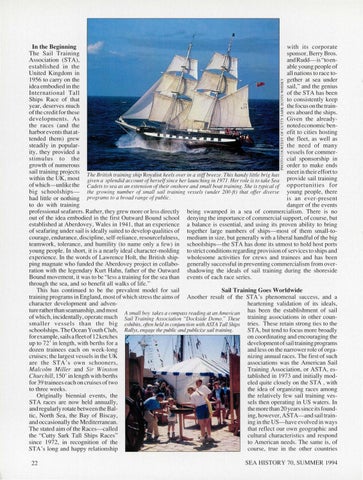 In the Beginning w ith its corporate Th e Sa il Trainin g sponsor, Berry Bros. and Rudd- is &quot;to enAssociation (ST A), able young people of es tabli s hed in th e United Kingdom in all nati ons to race to1956 to carry on the ~ gether at sea under idea embodied in the i sail ,&quot; and the genius :i: of the ST A has been Inte rn a ti o na l T a ll Ships Race of that ~ to consistentl y keep ~ the foc us on the trainyear, deserves much of the credit for these ~ ees aboard the ships. deve lo pm e nts. As ~ G iven the alreadythe races (and the ::&gt; noted economic benu harbor events that at~ efit to cities hosting i;; the fl eet, as we ll as tended them) grew steadily in popular~ th e need of many 5u vessels for commerity , they provided a s timulu s to th e ~ c ial sponsorship in O:i: order to make ends growth of numerous 0. sail training projects meet in their effort to The British training ship Royalist heels over in a stiff breeze. This handy lillle brig has within the UK, most given a splendid account of herself since her launching in 1971. Her role is to take Sea prov ide sail training of which- unlike the Cadets to sea as an extension of their onshore and small boat training. She is typical of o pp o rtuniti es fo r bi g sc hoo lships - the growing number of small sail training vessels (under 200-ft) thal offer diverse yo ung peopl e, there had little or nothing programs to a broad range of public. is an ever-present to do with training danger of the events profess iona l seafarers. Rather, they grew more or less direc tl y be ing swamped in a sea of commerciali sm. There is no out of the idea embodied in the first Outward Bound school denying the importance of commercia l support, of course, but establi shed at Aberdovey, Wales in 1941 , that an ex perience a balance is essential , and using its proven ability to bring of seafa ring under sail is ideall y suited to develop qualities of together large numbers of ships-most of them small-tocourage, endurance, discipline, self- re li ance, resourcefulness, medium in size, but generall y with a liberal handful of the bi g teamwo rk , to lerance, and hum ili ty (to name only a few) in schoolships-the STA has done its utmost to hold host ports yo ung people. In short, it is a nearl y ideal character-molding to strict conditions regarding prov ision of services to ships and ex perience. In the words of Lawrence Holt, the Briti sh ship- who lesome acti vities for crews and trainees and has been ping magnate who funded the Aberdovey project in coll abo- generall y successful in preventing commerciali sm from overration with the legendary Kurt Hahn , father of the Outward shadow ing the ideals of sail training during the shoreside Bo und movement, it was to be &quot; less a training for the sea than events of each race series. through the sea, and so benefit all walks of life .&quot; Thi s has continued to be the prevalent model for sail Sail Training Goes Worldwide training programs in England , most of which stress the aim s of Another result of the STA&#39;s phenomenal success, and a character development and advenheartening validation of its ideals, ture rather than seamanship, and most A small boy takes a compass reading al an American has been the establi shment of sail of which, incidentally ,operate much Sail Training Association &quot;Dockside Demo. &quot; These trainin g associations in other couns m a ll e r vesse ls th a n the b ig exhibits, often held in conjunction with ASTA Tall Ships tries. T hese retain strong ties to the ST A, but tend to foc us more broadl y schoo lships. The Ocean Youth Club, Rallys, engage the public and publicize sail training. on coordin ating and encouraging the fo r example, sails a fl eet of 12 ketches :fir up to 72&#39; in length , with berth s fo r a development of sail training programs ,,. dozen trainees each on week- long and less on the narrower role of orga\ crui ses; the largest vessels in the UK ni zing annual races . The first of such a re th e ST A&#39;s own sc hoo ners, associations was the Ameri can Sa il Malcolm Miller and Sir Wi nston T raining Assoc iation , or AST A, establi shed in 1973 and initi all y modChurchill, 150&#39; in length with berths for 39 trainees each on crui ses of two eled quite closely on the ST A , with the idea of organi zing races among to three weeks. Ori gin all y biennial events, the the re latively fe w sail training vesST A races are no w held annuall y, sels then operating in US waters. In and regularly rotate between the Balthe more than 20 years since its fo unding, however, ASTA-and sail traintic, North Sea, the Bay of Biscay, ing in the US-have evolved in ways and occasionall y the Med ite rranean. The stated aim of the Races-called that refl ect our own geographic and the &quot;Cutty Sark Tall Ships Races&quot; cul tural characteristics and respond since 1972, in recogniti on of the to American needs. The same is, of ST A&#39;s long and happy relati onship course, true in the other countries