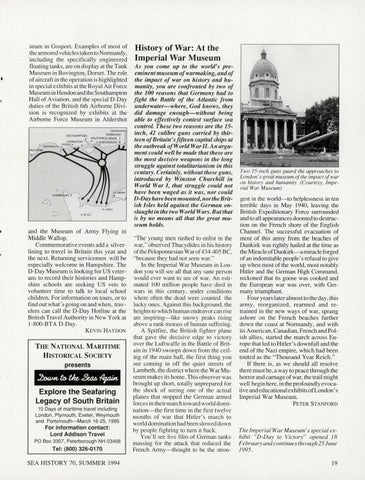 seum in Gosport. Examples of most of the armored vehicles taken to Normandy, including the specifically engineered floating tanks, are on display at the Tank Museum in Bovington, Dorset. The role of aircraft in the operation is highlighted in special exhibits at the Royal Air Force Museum in Hendon and the Southampton Hall of Aviation, and the special D-Day duties of the British 6th Airborne Division is recognized by exhibits at the Airborne Force Museum in Aldershot

and the Museum of Army Flying m Middle Wallop. Commemorative events add a silverlining to travel in Britain this year and the next. Returning servicemen will be especially welcome in Hampshire. The D-Day Museum is looking for US veterans to record their histories and Hampshire schools are seeking US vets to volunteer time to talk to local school children. For information on tours, or to find out what's going on and when, travelers can call the D-Day Hotline at the British Travel Authority in New York at 1-800-BTA D-Day. KEV IN H AYDON

History of War: At th~ Imperial War Museum As you come up to the world's preeminent museum of warmaking, and of the impact of war on history and humanity, you are confronted by two of the 100 reasons that Germany had to fight the Battle of the Atlantic from underwater-where, God knows, they did damage enough-without being able to effectively contest surface sea control. These two reasons are the 15inch, 42 calibre guns carried by thirteen of Britain's fifteen capital ships at the outbreak of World War 11. An argument could well be made that these are the most decisive weapons in the long struggle against totalitarianism in this century. Certainly, without these guns, Two 15-inch guns guard the approaches to introduced by Winston Churchill in London's great museum of the impact of war on history and humanity . (Courtesy , ImpeWorld War 1, that struggle could not rial War Museum) have been waged as it was, nor could D-Day have been mounted, nor the Brit- gest in the world-to helplessness in ten ish Isles held against the German on- terrible days in May 1940, leaving the slaught in the two World Wars. But that British Expeditionary Force surrounded is by no means all that the great mu- and to all appearances doomed to destrucseum holds. tion on the French shore of the English "The young men rushed to en list in the war," observed Thucydides in hi s history of the Peloponnesian War of 434-405 BC, "because they had not seen war. " In the Imperial War Museum in London you will see all that any sane person would ever want to see of war. An estimated 100 million people have died in wars in this century, under conditions where often the dead were counted the lucky ones. Against this background, the heights to which human endeavor can ri se are inspiring-like snowy peaks risi ng above a rank morass of human suffering. A Spitfire, the British fighter plane that gave the decisive edge to victory over the Luftwaffe in the Battle of Britain in 1940 swoops down from the ceiling of the main hall, the first thing you see coming in off the quiet streets of Lambeth , the district where the War Museum makes its home. This observer was brought up short, totally unprepared for the shock of seeing one of the actual planes that stopped the German armed forces in their march toward world domination- the first time in the first twelve months of war that Hitler 's march to world domination had been slowed down by people fighting to tum it back. You'll see live film of German tanks massing for the attack that reduced the French Army-thought to be the stron-

Channel. The successful evacuation of most of this army from the beaches of Dunkirk was rightly hailed at the time as the Miracle of Dunkirk-a miracle forged of an indomitable people's refusal to give up when most of the world, most notably Hitler and the German High Command, reckoned that its goose was cooked and the European war was over, with Germany triumphant. Four years later almost to the day, this army, reorganized , rearmed and retrained in the new ways of war, sprang ashore on the French beaches farther down the coast at Normandy, and with its American, Canadian, French and Polish allies, started the march across Europe that led to Hitler 's downfall and the end of the Nazi empire, which had been touted as the "Thousand Year Reich." If there is, as we should all resolve there must be, a way to peace through the horror and carnage of war, the trail might well begin here, in the profoundly evocative and educational exhibits of London 's Imperial War Museum. PETER STANFORD

The Imperial War Museum's special exhibit "D-Day to Victory" opened I 8 February and continues through 25 I une 1995. 19