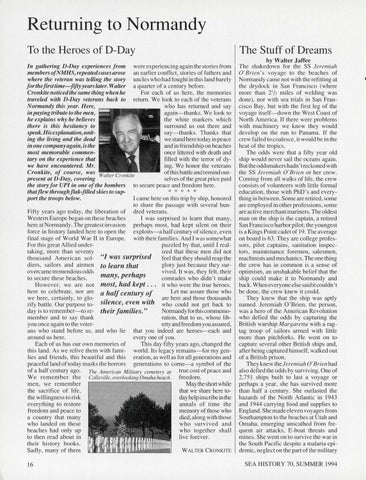 Returning to Normandy To the Heroes of D-Day

The Stuff of Dreams

In gathering D-Day experiences from were experiencing again the stories from membersofNMHS,repeatedcasesarose an earlier conflict, stories of fathers and where the veteran was telling the story uncles who had fought in this land barely forthefirsttime-fifty years taler. Walter a quarter of a century before. For each of us here, the memories Cronkite noticed the same thing when he traveled with D-Day veterans back to return. We look to each of the veterans Normandy this year. Here, who has returned and say in paying tribute to the men, again-thanks. We look to he explains why he believes the white markers which there is this hesitancy to surround us out there and speak.His explanation, unitsay- thanks . Thanks that ing the living and the dead we stand here today in peace in one company again, is the and in friendship on beaches once littered with death and most memorable commentary on the experience that filled with the terror of dywe have encountered. Mr. ing. We honor the veterans of this battle and remind ourCronkite, of course, was Walter Cronkite present at D-Day, covering selves of the great price paid the story for UPI in one of the bombers to secure peace and freedom here. that flew through flak-filled skies to sup***** port the troops below. I came here on this trip by ship, honored to share the passage with several hunFifty years ago today, the liberation of dred veterans . Western Europe began on these beaches I was surprised to learn that many, here at Normandy. The greatest invasion perhaps most, had kept silent on their force in history landed here to open the exploits-a half century of silence, even final stage of World War II in Europe. with their families . And I was somewhat For this great Allied underpuzzled by that, until I realtaking, more than seventy ized that these men did not thou sand American sol- "/ was surprised feel that they should reap the diers , sailors and airmen to learn that glory just because they surovercame tremendous odds vived. It was, they felt, their to secure these beaches. many, perhaps comrades who didn ' t make However, we are not most, had kept. . . it who were the true heroes. Let me assure those who here to celebrate, nor are a half century of we here, certainly, to gloare here and those thousands rify battle. Our purpose to- silence, even with who could not get back to Norrnandyforthiscommemoday is to remember-to re- their families." member and to say thank ration, that to us, whose libyou once again to the vetererty and freedom you assured, ans who stand before us, and who lie that you indeed are heroes-each and around us here. every one of you. Each of us has our own memories of This day fifty years ago, changed the this land. As we relive them with fami- world. Its legacy remains-for my genlies and friends, this beautiful and this eration, as well as for all generations and peaceful land of today masks the horrors generations to come-a symbol of the of a half century ago. The American Military cemetery at true cost of peace and We remember the Co/leville, overlooking Omaha beach. freedom . men, we remember Maytheshortwhile that we share here tothe sacrifice of life, the willingness to risk day help inscribe in the everything to restore annals of time the freedom and peace to memory of those who a country that many died, along with those who landed on these who survived and beaches had only up who together shall to then read about in live forever. their history books. Sadly, many of them WALTER CRONKITE

The shakedown for the SS Jeremiah O' Brien's voyage to the beaches of Normandy came not with the refitting at the drydock in San Francisco (where more than 2 1/2 miles of welding was done), nor with sea trials in San Francisco Bay, but with the first leg of the voyage itself-<lown the West Coast of North America. lf there were problems with machinery we knew they would develop on the run to Panama. If the crew failed to coalesce, it would be in the heat of the tropics . The odds were that a fifty year old ship would never sail the oceans again. But theoddsmakers hadn'treckoned with the SS Jeremiah O'Brien or her crew. Coming from all walks of life, the crew consists of volunteers with little formal education, those with PhD's and everything in between. Some are retired, some are employed in other professions, some are active merchant mariners. The oldest man on the ship is the captain, a retired San Francisco harbor pilot; the youngest is a Kings Point cadet of 19. The average on board is 63. They are college professors , pilot captains, sanitation inspectors, maintenance foremen, salesmen, machinists and mechanics. The one thing the crew has in common is a sense of optimism, an unshakable belief that the ship could make it to Normandy and back. When everyone else said itcouldn' t be done, the crew knew it could. They knew that the ship was aptly named. Jeremiah O'Brien, the person, was a hero of the American Revolution who defied the odds by capturing the British warship Margaretta with a ragtag troop of sailors armed with little more than pitchforks. He went on to capture several other British ships and, after being captured himself, walked out of a British prison. They knew theferemiah O'Brien had also defied the odds by surviving. One of 2,751 ships built to last a: voyage or perhaps a year, she has survived more than half a century. She outlasted the hazards of the North Atlantic in 1943 and 1944 carrying food and supplies to England. She made eleven voyages from Southampton to the beaches at Utah and Omaha, emerging unscathed from frequent air attacks, E-boat threats and mines. She went on to survive the war in the South Pacific despite a malaria epidemic, neglect on the part of the military