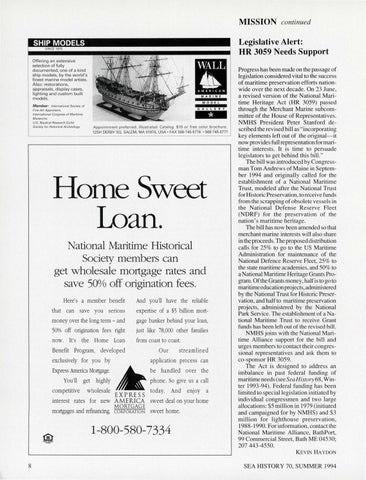 And you 'll have the reliable

that can save you serious

expertise of a $5 billion mort-

money over the long term - and

gage banker behind your loan,

from coast to coast.

be handled over the

highly ~ phone. So give us a call

Progress has been made on the passage of legislation considered vital to the success of maritime preservation efforts nationwide over the next decade. On 23 June, a revised version of the National Mari time Heritage Act (HR 3059) passed through the Merchant Marine subcommittee of the House of Representatives. NMHS President Peter Stanford described the revised bill as " incorporating key elements left out of the original-it now provides full representation for maritime interests. It is time to persuade legislators to get behind this bill." The bill was introduced by Congressman Tom Andrews of Maine in September 1994 and originally called for the establishment of a National Maritime Trust, modeled after the National Trust for Historic Preservation, to receive fund s from the scrapping of obsolete vessels in the National Defen se Rese rve Fleet (NDRF) for the preservation of the nation's maritime heritage. The bill has now been amended so that merchant marine interests will also share in the proceeds. The proposed distribution calls for 25 % to go to the US Maritime Administration for maintenance of the National Defence Reserve Fleet, 25 % to the state maritime academies, and 50% to a National Maritime Heritage Grants Program. Of the Grants money, half is to go to maritime education projects, administered by the National Trust for Historic Preservation, and half to maritime preservation projects, administered by the National Park Service. The establishment of a National Maritime Trust to receive Grant fund s has been left out of the revised bill. NMHS joins with the National Maritime Alliance support for the bill and urges members to contact their congressional representatives and ask them to co-sponsor HR 3059. The Act is designed to address an imbalance in past federal funding of maritime needs (seeSeaHistory68, Winter 1993-94 ). Federal funding has been limited to special legislation initiated by individual congressmen and two large allocations: $5 million in 1979 (initiated and campaigned for by NMHS) and $3 million for lighthou se preservation , 1988-1990. For information , contact the National Maritime Alliance, BathPort, 99 Commercial Street, Bath ME 04530; 207 443-4550. KEVIN HAYDON