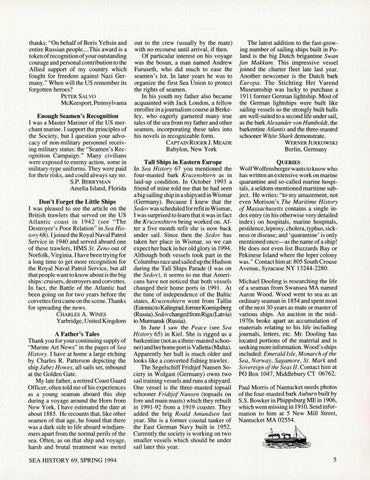 thanks: &quot;On behalf of Boris Yeltsin and entire Russian people .... This award is a token of recognition of your outstanding courage and personal contribution to the Allied support of my country which fought for freedom against Nazi Germany.&quot; When will the US remember its forgotten heroes? PETER SALVO

Enough Seamen&#39;s Recognition I was a Master Mariner of the US merchant marine. I support the principles of the Society, but I question your advocacy of non-military personnel receiving military status: the &quot;Seamen&#39;s Recognition Campaign.&quot; Many civilians were exposed to enemy action, some in military-type uniforms. They were paid for their risks, and could always say no. S .P. BERRYMAN

Don&#39;t Forget the Little Ships I was pleased to see the article on the British trawlers that served on the US Atlantic coast in 1942 (see &quot; The Destroyer&#39;s Poor Relation&quot; in Sea History 68). I joined the Royal Naval Patrol Service in 1940 and served aboard one of these trawlers, HMS St. Zeno out of Norfolk, Virginia. I have been trying for a long time to get more recognition for the Royal Naval Patrol Service, but all that people want to know about is the big ships: cruisers, destroyers and corvettes. In fact, the Battle of the Atlantic had been going on for two years before the corvettes first came on the scene. Thanks for spreading the news. CHARLES A. WINES Yarbridge, United Kingdom

A Father&#39;s Tales Thank you for your continuing supply of &quot;Marine Art News&quot; in the pages of Sea History. I have at home a large etching by Charles R. Patterson depicting the ship Jabez Howes , all sails set, inbound at the Golden Gate. My late father, a retired Coast Guard Officer, often told me of his experiences as a young seaman aboard this ship during a voyage around the Horn from New York. I have estimated the date at about 1885. He recounts that, like other seamen of that age, he found that there was a dark side to life aboard windjammers apart from the normal perils of the sea. Often, as on that ship and voyage, harsh and brutal treatment was meted SEA HISTORY 69, SPRING 1994

out to the crew (usually by the mate) with no recourse until arrival, if then. Of particular interest on his voyage was the bosun, a man named Andrew Furuseth, who did much to ease the seamen&#39;s lot. In later years he was to organize the first Sea Union to protect the rights of seamen. In his youth my father also became acquainted with Jack London, a fellow enrollee in a journalism course at Berkeley, who eagerly garnered many true tales of the sea from my father and other seamen, incorporating these tales into his novels in recognizable form.

The latest addition to the fast-growing number of sailing ships built in Poland is the big Dutch brigantine Swan fan Makkum. This impressive vessel joined the charter fleet late last year. Another newcomer is the Dutch bark Europa. The Stichting Het Varend Museumship was lucky to purchase a 1911 former German lightship. Most of the German lightships were built like sailing vessels so the strongly built hulls are well-suited to a second life under sail, as the bark Alexander von Humboldt, the barkentine Atlantis and the three-masted schooner White Shark demonstrate.

In Sea History 67 you mentioned the four-masted bark Kruzenshtern as in laid-up condition. In October 1993 a friend of mine told me that he had seen a big sailing ship in a shipyard in Wismar (Germany). Because I knew that the Sedov was scheduled forrefit in Wismar, I was surprised to learn that it was in fact the Kruzenshtern being worked on. After a five month refit she is now back under sail. Since then the Sedov has taken her place in Wismar, so we can expect her back in her old glory in 1994. Although both vessels took part in the Columbus race and sailed up the Hudson during the Tall Ships Parade (I was on the Sedov), it seems to me that Americans have not noticed that both vessels changed their home ports in 1991. At the time of independence of the Baltic states, Kruzenshtern went from Tallin (Estonia) to Kalingrad, former Koenigsberg (Russia). Sedov changed from Riga (Latvia) to Murmansk (Russia). In June I saw the Peace (see Sea History 65) in Kiel. She is rigged as a barkentine (not as a three-masted schooner) and her home port is Valletta (Malta). Apparently her hull is much older and looks like a converted fishing trawler. The Segelschiff Fridtjof Nan sen Society in Wolgast (Germany) owns two sail training vessels and runs a shipyard. One vessel is the three-masted topsail schooner Fridtjof Nansen (topsails on fore and main masts) which they rebuilt in 1991-92 from a 1919 coaster. They added the brig Roald Amundsen last year. She is a former coastal tanker of the East German Navy built in 1952. Currently the society is working on two smaller vessels which should be under sail later this year.

WolfWolfensberger wants to know who has written an extensive work on marine quarantine and so-called marine hospitals, a seldom-mentioned maritime subject. He writes: &quot;to my amazement, not even Morison&#39;s The Maritime History of Massachusetts contains a single index entry (in his otherwise very detailed index) on hospitals, marine hospitals, pestilence, leprosy, cholera, typhus, sickness or disease; and &#39;quarantine&#39; is only mentioned once-as the name of a ship! He does not even list Buzzards Bay or Pekinese Island where the leper colony was.&quot; Contact him at: 805 South Crouse Avenue, Syracuse NY 13244-2280. Michael Dooling is researching the life of a seaman from Swansea MA named Aaron Wood. Wood went to sea as an ordinary seaman in 1854 and spent most of the next 30 years as mate or master of various ships. An auction in the mid1970s broke apart an accumulation of materials relating to his life including journals, letters, etc. Mr. Dooling has located portions of the material and is seeking more information. Wood&#39;s ships included: Emerald Isle, Monarch of the Sea, Norway, Sagamore, St. Mark and Sovereign of the Seas II. Contact him at PO Box 1047, Middlebury CT 06762. Paul Morris of Nantucket needs photos of the four-masted bark Auburn built by S.S. Bowker in Phippsburg ME in 1906, which went missing in 1910. Send information to him at 5 New Mill Street, Nantucket MA 02554.