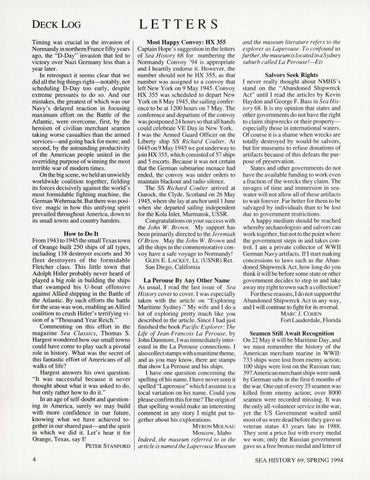 Timing was crucial in the invasion of Normandy in northern France fifty years ago, the &quot;D-Day&quot; invasion that led to victory over Nazi Germany less than a year later. In retrospect it seems clear that we did all the big things right-notably, not scheduling D-Day too early, despite extreme pressures to do so. And our mistakes, the greatest of which was our Navy&#39;s delayed reaction in focusing maximum effort on the Battle of the Atlantic, were overcome, first, by the heroism of civilian merchant seamen taking worse casualties than the armed services-and going back for more; and second, by the astounding productivity of the American people united in the overriding purpose of winning the most terrible war of modem times. On the big scene, we held an unwieldy worldwide coalition together, fielding its forces decisively against the world&#39;s most formidable fighting machine, the German Wehrmacht. But there was positive magic in how this unifying spirit prevailed throughout America, down to its small towns and country hamlets.

Most Happy Convoy: HX 355 Captain Hope&#39;s suggestion in the letters of Sea History 68 for numbering the Normandy Convoy &#39;94 is appropriate and I heartily endorse it. However, the number should not be HX 355, as that number was assigned to a convoy that left New York on 9 May 1945. Convoy HX 355 was schedu led to depart New York on 8 May 1945 , the sailing conference to be at 1200 hours on 7 May. The conference and departure of the convoy was postponed 24 hours so that all hands could celebrate VE Day in New York. I was the Armed Guard Officer on the Liberty ship SS Richard Coulter. At 0445 on 9 May 1945 we got underway to join HX 355, which consisted of 57 ships and 5 escorts. Because it was not certain that the German submarine menace had ended, the convoy was under orders to maintain blackout and radio silence. The SS Richard Coulter arrived at Gurock, the Clyde, Scotland on 26 May 1945, where she lay atanchoruntil l June when she departed sailing independent for the Kola Inlet, Murmansk, USSR. Congratulations on your success with the John W. Brown. My support has been primarily directed to the Jeremiah O&#39;Brien. May the John W. Brown and all the ships in the commemorative convoy have a safe voyage to Normandy! GLEN E. LACKEY, Lt. (USNR) Ret. San Diego, California

How to Do It From 1943 to 1945 the small Texas town of Orange built 250 ships of all types, including 138 destroyer escorts and 30 fleet destroyers of the formidable Fletcher class. This little town that Adolph Hitler probably never heard of played a big role in building the ships that swamped his U-boat offensive against Allied shipping in the Battle of the Atlantic. By such efforts the battle for the seas was won, enabling an Allied coalition to crush Hitler&#39;s terrifying vision of a &quot;Thousand Year Reich.&quot; Commenting on this effort in the magazine Sea Classics, Thomas S. Hargest wondered how our small towns could have come to play such a pivotal role in history. What was the secret of this fantastic effort of Americans of all walks of life? Hargest answers his own question: &quot;It was successful because it never thought about what it was asked to do, but only rather how to do it.&quot; In an age of self-doubt and questioning in America, surely we may build with more confidence in our future, knowing what we have achieved together in our shared past-and the spirit in which we did it. Let&#39;s hear it for Orange, Texas, say I! PETER STANFORD 4

La Perouse By Any Other Name As usual , I read the last issue of Sea History cover to cover. I was especially taken with the article on &quot;Exploring Maritime Sydney.&quot; My wife and I do a lot of exploring pretty much like you described in the article. Since I had just finished the book Pacific Explorer: The Life of Jean-Francois La Perouse, by John Dunmore, I was immediate( y interested in the La Perouse connections. I also collect stamps with a maritime theme, and as you may know, there are stamps that show La Perouse and his ships. I have one question concerning the spelling of his name. I have never seen it spelled &quot;Laperouse&quot; which I assume is a local variation on his name. Could you please confirm this for me? The origin of that spelling would make an interesting comment in any story I might put together about his explorations. MYRON MOLNAU Moscow, Idaho Indeed, the museum referred to in the article is named the Laperouse Museum

and the museum literature refers to the explorer as Laperouse. To confound us further, the museum is located in a Sydney suburb called La Perouse!--ED Salvors Seek Rights I never really thought about NMHS&#39;s stand on the &quot;Abandoned Shipwreck Act&quot; until I read the articles by Kevin Haydon and George F. Bass in Sea History 68. It is my opinion that states and other governments do not have the right to claim shipwrecks or their propertyespecially those in international waters. Of course it is a shame when wrecks are totally destroyed by would-be salvors, but for museums to refuse donations of artifacts because of this defeats the purpose of preservation. States and other governments do not have the available funding to work even a fraction of the wrecks they claim. The ravages of time and immersion in seawater will not allow all of these artifacts to wait forever. Far better for them to be salvaged by individuals than to be lost due to government restrictions. A happy medium should be reached whereby archaeologists and salvors can work together, but not to the point where the government steps in and takes control. I am a private collector of WWII German Navy artifacts. Ifl start making concessions to laws such as the Abandoned Shipwreck Act, how long do you think it will be before some state or other government decides to step in and take away my right to own such a collection? For these reasons , I do not support the Abandoned Shipwreck Act in any way, and I will continue to fight for its reversal. MARC J. COHEN Fort Lauderdale, Florida Seamen Still Await Recognition On 22 May it will be Maritime Day, and we must remember the history of the American merchant marine in WWII: 733 ships were lost from enemy action; 100 ships were lost on the Russian run; 397 American merchant ships were sunk by German subs in the first 6 months of the war. One out of every 35 seamen was killed from enemy action; over 8000 seamen were recorded missing. It was the only all-volunteer service in the war, yet the US Government waited until most of us were dead before they gave us veteran status 43 years late in 1988. They sent a price li st with every medal we won; only the Russian government gave us a free bronze medal and letter of SEA HISTORY 69, SPRING 1994