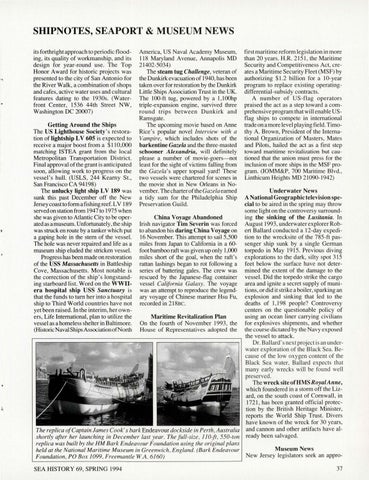 SHIPNOTES, SEAPORT &amp; MUSEUM NEWS its forthri ght approach to periodic flooding, its quality of workmanship, and its design for year-round use. The Top Honor Award for historic projects was presented to the city of San Antonio for the River Walk, a combination of shops and cafes, active water uses and cultural features dating to the 1930s. (Waterfront Center, 1536 44th Street NW, Washington DC 20007) Getting Around the Ships The US Lighthouse Society&#39;s restoration of lightship L V 605 is expected to receive a major boost from a $110,000 matching ISTEA grant from the local Metropolitan Transportation District. Final approval of the grant is anticipated soon, allowing work to progress on the vessel &#39;s hull. (USLS, 244 Kearny St., San Francisco CA 94198) The unlucky light ship L V 189 was sunk this past December off the New Jersey coast to form a fishing reef. LV 189 served on station from 1947 to 1975 when she was given to Atlantic City to be operated as a museum. Unfortunately, the ship was struck en route by a tanker which put a gaping hole in the stem of the vessel. The hole was never repaired and life as a museum ship eluded the stricken vessel. Progress has been made on restoration of the USS Massachusetts in Battleship Cove, Massachusetts. Most notable is the correction of the ship&#39;s longstanding starboard list. Word on the WWIIera hospital ship USS Sanctuary is that the funds to tum her into a hospital ship to Third World countries have not yet been raised. In the interim, her owners, Life International, plan to utili ze the vessel as a homeless shelter in Baltimore. (Historic Naval Ships Association of North

America, US Naval Academy Museum, 11 8 Maryland Avenue, Annapolis MD 21402-5034) The steam tug Challenge, veteran of the Dunkirk evacuation of 1940, has been taken over for restoration by the Dunkirk Little Ships Association Trust in the UK. The 100-ft tug, powered by a l ,lOOhp triple-expansion engine, survived three round trip s between Dunkirk and Ramsgate. The upcoming movie based on Anne Rice&#39;s popular novel Interview with a Vampire , which includes shots of the barkentine Gazela and the three-masted schooner Alexandria, will definitely please a number of movie-goers-not least for the sight of victims falling from the Gazela&#39;s upper topsail yard! These two vessels were chartered for scenes in the movie shot in New Orleans in November. The charterof the Gaze la earned a tidy sum for the Philadelphia Ship Preservation Guild.

first maritime reform legislation in more than 20 years. H.R. 2151, the Maritime Security and Competitiveness Act, creates a Maritime Security Fleet (MSF) by authorizing $1.2 billion for a 10-year program to replace existing operatingdifferential-subsidy contracts. A number of US-flag operators praised the act as a step toward a comprehensive program that will enable US flag ships to compete in international trade on a more level playing field. Timothy A. Brown, President of the International Organization of Masters, Mates and Pilots, hailed the act as a first step toward maritime revitalization but cautioned that the union must press for the inclusion of more ships in the MSF program. (IOMM&amp;P, 700 Maritime Blvd., Linthicum Heights MD 21090-1942)

Underwater News AN ational Geographic television special to be aired in the spring may throw some light on the controversy surroundChina Voyage Abandoned ing the sinking of the Lusitania. In Irish navigator Tim Severin was forced August 1993, underwater explorer Robto abandon his daring China Voyage on ert Ballard conducted a 12-day expedi 16 November. This attempt to sail 5,500 tion to the wrecksite of the 785-ft pasmiles from Japan to California in a 60- senger ship sunk by a single German foot bamboo raft was given up only 1,000 torpedo in May 1915. Previous diving miles short of the goal, when the raft&#39;s explorations to the dark, silty spot 315 rattan lashings began to rot following a feet below the surface have not deterseries of battering gales. The crew was mined the extent of the damage to the rescued by the Japanese-flag container vessel. Did the torpedo strike the cargo vessel California Galaxy. The voyage area and ignite a secret supply of muniwas an attempt to reproduce the legend- tions, or did it strike a boiler, sparking an ary voyage of Chinese mariner Hsu Fu, explosion and sinking that led to the deaths of 1,198 people? Controversy recorded in 218BC. centers on the questionable policy of using an ocean liner carrying civilians Maritime Revitalization Plan On the fourth of November 1993, the for explosives shipments, and whether House of Representatives adopted the the co urse dictated by the Navy exposed the vessel to attack. Dr. Ballard&#39;s next project is an underwater exploration of the Black Sea. Because of the low oxygen content of the Black Sea water, Ballard expects that many earl y wrecks will be found well preserved. The wreck site of HMS Royal Anne, which foundered in a storm off the Lizard, on the south coast of Cornwall, in 1721 , has been granted official protection by the British Heritage Mini ster, reports the World Ship Trust. Divers have known of the wreck for 30 years, The replica of Captain James Cook&#39;s bark Endeavour dockside in Perth, Australia and cannon and other artifacts have alshortly after her launching in December last year. The full-size , 110-ft, 550-ton ready been salvaged. replica was built by the HM Bark Endeavour Foundation using the original plans Museum News held at the National Maritime Museum in Greenwich, England. (Bark Endeavour New Jersey legislators seek an approFoundation, PO Box 1099, Freemantle W.A. 6160)