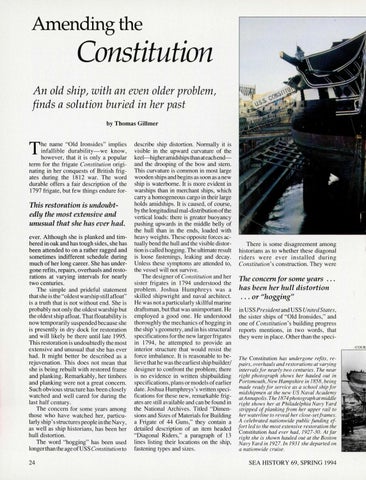 Constitution An old ship, with an even older problem, finds a solution buried in her past by Thomas Gillmer

he name &quot;Old Ironsides&quot; implies infallible durability-we know, however, that it is only a popular term for the frigate Constitution originating in her conquests of British frigates during the 1812 war. The word durable offers a fair description of the 1797 frigate, but few things endure for-

This restoration is undoubtedly the most extensive and unusual that she has ever had. ever. Although she is planked and timbered in oak and has tough sides, she has been attended to on a rather ragged and sometimes indifferent schedule during much of her long career. She has undergone refits, repairs, overhauls and restorations at varying intervals for nearly two centuries. The simple and prideful statement that she is the &quot;oldest warship still afloat&quot; is a truth that is not without end. She is probably not on! y the oldest warship but the oldest ship afloat. That floatability is now temporarily suspended because she is presently in dry dock for restoration and will likely be there until late 1995. This restoration is undoubtedly the most extensive and unusual that she has ever had. It might better be described as a rejuvenation. This does not mean that she is being rebuilt with restored frame and planking. Remarkably, her timbers and planking were not a great concern. Such obvious structure has been closely watched and well cared for during the last half century. The concern for some years among those who have watched her, particularly ship&#39;s structures people in the Navy, as well as ship historians, has been her hull distortion. The word &quot;hogging&quot; has been used longerthan the age of USS Constitution to 24

describe ship distortion. Normally it is visible in the upward curvature of the keel-higher amidships than at each endand the drooping of the bow and stem. This curvature is common in most large wooden ships and begins as soon as a new ship is waterborne. It is more evident in warships than in merchant ships, which carry a homogeneous cargo in their large holds amidships. It is caused, of course, by the longitudinal mal-distribution of the vertical loads: there is greater buoyancy pushing upwards in the middle belly of the hull than in the ends, loaded with heavy weights. These opposite forces actually bend the hull and the visible distortion is called hogging. The ultimate result is loose fastenings, leaking and decay. Unless these symptoms are attended to, the vessel will not survive. The designer of Constitution and her sister frigates in 1794 understood the problem. Joshua Humphreys was a skilled shipwright and naval architect. He was not a particularly skillful marine draftsman, but that was unimportant. He employed a good one. He understood thoroughly the mechanics of hogging in the ship&#39;s geometry , and in his structural specifications for the new larger frigates in 1794, he attempted to provide an interior structure that would resi st the force imbalance. It is reasonable to believe that he was the earliest ship builder/ designer to confront the problem; there is no evidence in written shipbuilding specifications, plans or models of earlier date. Joshua Humphreys &#39;s written specifications for these new, remarkable frigates are still available and can be found in the National Archives. Titled &quot;Dimensions and Sizes of Materials for Building a Frigate of 44 Guns,&quot; they contain a detailed description of an item headed &quot;Diagonal Riders,&quot; a paragraph of 13 lines listing their locations on the ship, fastening types and sizes.

There is some disagreement among historians as to whether these diagonal riders were ever installed during Constitution&#39;s construction. They were

The concern for some years ... has been her hull distortion ... or &quot;hogging&quot; in USS President and USS UnitedStates, the sister ships of &quot;Old Ironsides,&quot; and one of Constitution&#39; s building progress reports mentions, in two words, that they were in place. Other than the speci-

The Constitution has undergone refits , repairs, overhauls and restorations at varying intervals for nearly two centuries. The near right photograph shows her hauled out in Portsmouth , New Hampshire in 1858, being made ready for service as a school ship for midshipmen at the new US Naval Academy at Annapolis. The 1874 photograph at middle right shows her at Philadelphia Navy Yard stripped of planking from her upper rail to her waterline to reveal her close-set frames. A celebrated nationwide public funding effort led to the most extensive restoration the Constitution had ever had, 1927-30. At far right she is shown hauled out at the Boston Navy Yard in 1927. ln 1931 she departed on a nationwide cruise.