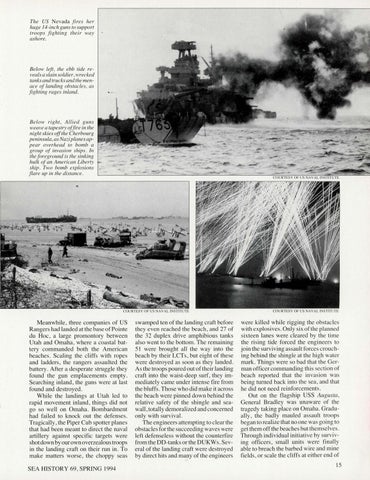 The US Nevada fi res her huge I 4-inch guns to support troops fi ghting their way ashore.

Below left, the ebb tide reveals a slainsoldier, wrecked tanks and trucks and the menace of landing obstacles, as fig hting rages inland.

Below right, Allied guns weave a tapestry of.fire in the night skies off the Cherbourg peninsula , as Nazi planes appear overhead to bomb a group of invasion ships. In the foreg round is the sinking hulk of an American Liberty ship. Two bomb explosions flare up in the distance .

Meanwhile , three companies of US Rangers had landed at the base of Pointe du Hoc , a large promontory between Utah and Omaha, where a coastal battery commanded both the American beaches. Scaling the cliffs with ropes and ladders, the rangers assaulted the battery. After a desperate struggle they fo und the gun emplacements empty . Searching inland , the guns were at last found and destroyed. While the landings at Utah led to rapid movement inland , things did not go so well on Omaha. Bombardment had failed to knock out the defenses. Tragically, the Piper Cub spotter planes that had been meant to direct the naval a.t1illery against specific targets were shot down by our own overzealous troops in the landing craft on their run in. To make matters worse, the choppy seas SEA HISTORY 69 , SPRING 1994

swamped ten of the landing craft before they even reached the beach, and 27 of the 32 duplex drive amphibious tanks also went to the bottom. The remaining 51 were brought all the way into the beach by their LCTs, but eight of these were destroyed as soon as they landed. As the troops poured out of their landing craft into the waist-deep surf, they immediately came under intense fire from the bluffs. Those who did make it across the beach were pinned down behind the relative safety of the shingle and seawall , totally demorali zed and concerned only with survival. The engineers attempting to clear the obstacles for the succeeding waves were left defen seless without the counterfire from the DD-tanks ortheDUKWs. Several of the landing craft were destroyed by direct hits and many of the engineers

were killed while rigging the obstacles with explosives. Only six of the planned sixteen lanes were cleared by the time the ri sing tide forced the engineers to join the survi ving assault forces crouching behind the shingle at the hi gh water mark . Things were so bad that the German officer commanding thi s section of beach reported that the invasion was being turned back into the sea , and that he did not need reinforcements. Out on the flagship USS Augusta, General Bradley was unaware of the tragedy taking place on Omaha. Gradually, the badly mauled assault troops began to realize that no one was going to get them off the beaches but themselves. Through individual initiati ve by surviving officers, small units were finally able to breach the barbed wire and mine fields , or scale the cliffs at either end of 15