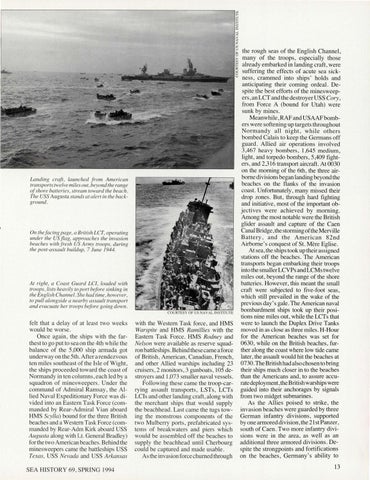 Landing craft, launched f rom American transports rwelve miles out, beyond the range of shore batteries, stream toward the beach. The USS A ugusta stands at alert in the background.

On the fa cing page, a British LCT, operating under the US flag, approaches the in vasion beaches with f resh US Army troops, during the post-assault buildup, 7 June 1944.

At right, a Coast Guard LC/ , loaded with troops, lists heavily to port before sinking in the English Channel . She had time, however, to pull alongside a nearby assault transport and evacuate her troops befo re going do wn.

felt that a delay of at least two weeks would be worse. Once again , the ships with the farthest to go put to sea on the 4th while the balance of the 5 ,000 ship armada got underway on the 5th. After a rendezvous ten miles southeast of the Isle of Wight , the ships proceeded toward the coast of Normandy in ten columns, each led by a squadron of minesweepers. Under the command of Admiral Ramsay, the Allied Naval Expeditionary Force was divided into an Eastern Task Force (commanded by Rear-Admiral Vian aboard HMS Scylla) bound for the three British beaches and a Western Task Force (commanded by Rear-Adm Kirk aboard USS Augusta along with Lt. General Bradley) for the two American beaches. Behind the minesweepers came the battleships USS Texas, USS Nevada and USS Arkansas SEA HISTORY 69 , SPRING 1994

with the Western Task force, and HMS Warspite and HMS Ramillies with the Eastern Task Force. HMS Rodney and Nelson were available as reserve squadron battleships. Behind these came a force of British, American , Canadian , French , and other Allied warships including 23 cruisers , 2 monitors, 3 gunboats, 105 destroyers and 1,073 smaller naval vessels. Following these came the troop-carrying assault transports, LSTs, LCTs LCis and other landing craft, along with the merchant ships that would supply the beachhead . Last came the tugs towing the monstrous components of the two Mulben-y ports, prefa bricated systems of breakwaters and pi ers which would be assembled off the beaches to supply the beachhead until Cherbourg could be captured and made u able. As the invasion force churned through

many of the troops , especially those already embarked in landing craft, were suffering the effects of acute sea sickness, crammed into ships &#39; holds and anticipating their corning ordeal. Despite the best efforts of the minesweepers , an LCT and the destroyer USS Cory , from Force A (bound for Utah) were sunk by mines. Meanwhile,RAFandUSAAFbombers were softening up targets throughout Normandy all night, while others bombed Calais to keep the Germans off guard. Allied air operations involved 3,467 heavy bombers, 1,645 medium, light, and torpedo bombers, 5,409 fighters , and 2,316 transport aircraft. At 0030 on the morning of the 6th, the three airborne divisions began landing beyond the beaches on the flanks of the invasion coast. Unfortunately , many missed their drop zones. But, through hard fighting and initiative, most of the important objectives were achieved by morning. Among the most notable were the British glider assault and capture of the Caen Canal Bridge, the storming of theMerville Battery , and the American 82nd Airbome &#39;s conquest of St. Mere Eglise. At sea , the ships took up their assigned stations off the beaches. The American transports began embarking their troops into the smaller LCVPs and LCMs twelve miles out, beyond the range of the shore batteries . However, this meant the small craft were subjected to five-foot seas , which still prevailed in the wake of the previous day &#39;s gale. The American naval bombardment ships took up their positions nine miles out, while the LCTs that were to launch the Duplex Drive Tanks moved in as close as three miles. H-Hour for the American beaches was set for 0630, while on the British beaches, further along the coast where low tide came later, the assault would hit the beaches at 0730. The British had also chosen to bring their ships much closer in to the beaches than the Americans and, to assure accuratedeployment, the British warships were guided into their anchorages by signals from two midget submarines . As the Allies poi sed to strike , the in vas ion beaches were guarded by three German infantry divisions , supported by one armored di vision , the 21st Panzer, south of Caen. Two more infantry divisions were in the area , as well as an additional three armored divisions. Despite the strongpoints and fortifications on the beaches, Germany&#39;s ability to 13