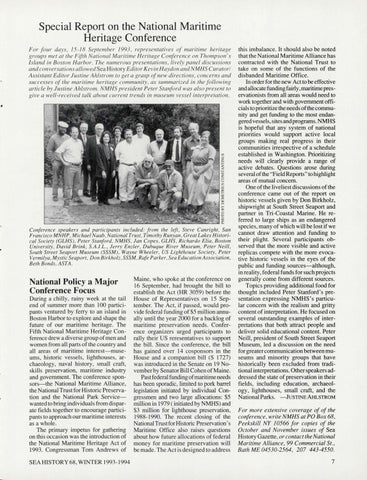 National Policy a Major Conference Focus During a chilly, rainy week at the tail end of summer more than 100 participants ventured by ferry to an island in Boston Harbor to explore and shape the future of our maritime heritage. The Fifth National Maritime Heritage Conference drew a diverse group of men and women from all parts of the country and all areas of maritime interest-museums, historic vessels, lighthouses, archaeology, naval history, small craft, ski lls preservation, maritime industry and government. The conference sponsors-the National Maritime Alliance, the National Trust for Historic Preservation and the National Park Servicewanted to bring individuals from disparate fields together to encourage participants to approach our maritime interests as a whole. The primary impetus for gathering on this occasion was the introduction of the National Maritime Heritage Act of 1993. Congressman Tom Andrews of SEA HISTORY 68, WINTER 1993-1994

Maine, who spoke at the conference on 16 September, had brought the bill to establish the Act (HR 3059) before the House of Representatives on 15 September. The Act, if passed, would provide federal funding of $5 million annually until the year 2000 for a backlog of maritime preservation needs. Conference organizers urged participants to rally their US reresentatives to support the bill. Since the conference, the bill has gained over 14 cosponsors in the House and a companion bill (S 1727) was introduced in the Senate on 19 November by Senator Bill Cohen of Maine. Past federal funding of maritime needs has been sporadic, limited to pork barrel legislation initiated by individual Congressmen and two large allocations: $5 million in 1979 (initiated by NMHS) and $3 million for lighthouse preservation, 1988-1990. The recent closing of the National Trust for Historic Preservation&#39;s Maritime Office also raises questions about how future allocations of federal money for maritime preservation will be made. The Act is designed to address

this imbalance. It should also be noted that the National Maritime Alliance has contracted with the National Trust to take on some of the functions of the disbanded Maritime Office. In order for the new Act to be effective and allocate funding fairly, maritime preservationists from all areas would need to work together and with government officials to prioritize the needs of the community and get funding to the most endangered vessels, sites and programs. NMHS is hopeful that any system of national priorities would support active local groups making real progress in their communities irrespective of a schedule established in Washington. Prioritizing needs will clearly provide a range of active debates. Questions arose during several of the &quot;Field Reports&quot; to highlight areas of mutual concern. One of the liveliest discussions of the conference came out of the report on historic vessels given by Don Birkholz, shipwright at South Street Seaport and partner in Tri-Coastal Marine. He referred to large ships as an endangered species, many of which will be lost if we cannot draw attention and funding to their plight. Several participants observed that the more visible and active replicas compete with the more evocative historic vessels in the eyes of the public and funding sources-although, in reality, federal fund s for such projects generally come from different sources. Topics providing additional food for thought included Peter Stanford&#39;s presentation expressing NMHS &#39;s particular concern with the realism and gritty content of interpretation. He focused on several outstanding examples of interpretations that both attract people and deliver solid educational content. Peter Neill, president of South Street Seaport Museum, led a discussion on the need for greater communication between museums and minority groups that have hi storically been excluded from traditional interpretations. Other speakers addressed the state of preservation in their fields , including education, archaeology, lighthouses, small craft, and the NationalParks. - JUSTINEAHLSTROM