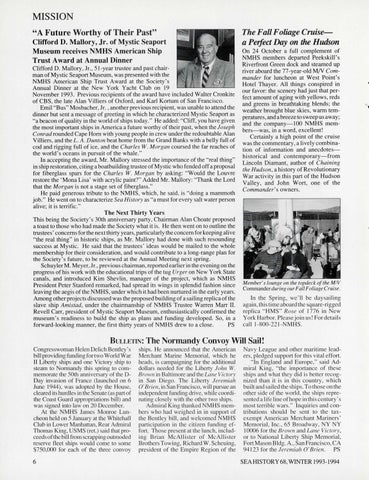 MISSION &quot;A Future Worthy of Their Past&quot; Clifford D. Mallory, Jr. of Mystic Seaport Museum receives NMHS American Ship Trust Award at Annual Dinner Clifford D. Mallory, Jr., 51-year trustee and past chairman of Mystic Seaport Museum, was presented with the NMHS American Ship Trust Award at the Society&#39;s Annual Dinner at the New York Yacht Club on 19 November 1993. Previous recipients of the award have included Walter Cronkite of CBS , the late Alan Villiers of Oxford, and Karl Kortum of San Francisco. Emil &quot;Bus&quot; Mosbacher, Jr., another previous recipient, was unable to attend the dinner but sent a message of greeting in which he characterized Mystic Seaport as &quot;a beacon of quality in the world of ships today.&quot; He added: &quot;Cliff, you have given the most important ships in America a future worthy of their past, when the Joseph Conrad rounded Cape Hom with young people in crew under the redoubtable Alan Villiers, and the L.A. Dunton beat home from the Grand Banks with a belly full of cod and rigging full of ice, and the Charles W. Morgan coursed the far reaches of the world&#39;s oceans in pursuit of the whale.&quot; In accepting the award, Mr. Mallory stressed the importance of the &quot;real thing&quot; in ship restoration, citing a boatbuilding trustee of Mystic who fended off a proposal for fiberglass spars for the Charles W. Morgan by asking: &quot;Would the Louvre restore the &#39;Mona Lisa &#39; with acrylic paint?&quot; Added Mr. Mallory: &quot;Thank the Lord that the Morgan is not a stage set of fiberglass.&quot; He paid generous tribute to the NMHS, which, he said, is &quot;doing a mammoth job.&quot; He went on to characterize Sea History as &quot;a must for every salt water person alive; it is terrific. &quot;

The Fall Foliage Cruisea Perfect Day on the Hudson On 24 October a full complement of NMHS members departed Peekskill &#39;s Riverfront Green dock and steamed up river aboard the 77-year-old MN Commander for luncheon at West Point&#39;s Hotel Thayer. All things conspired in our favor: the scenery had just that perfect amount of aging with yellows, reds and greens in breathtaking blends; the weather brought blue skies, warm temperatures, and a breeze to sweep us away; and the company- I 00 NMHS members-was, in a word, excellent! Certainly a high point of the cruise was the commentary, a lively combination of information and anecdoteshistorical and contemporary-from Lincoln Diamant, author of Chaining the Hudson , a history of Revolutionary War activity in this part of the Hudson Valley, and John Wort, one of the Commander&#39;s owners.

The Next Thirty Years This being the Society&#39;s 30th anniversary party, Chairman Alan Choate proposed a toast to those who had made the Society what it is. He then went on to outline the trustees &#39; concerns for the next thirty years, particularly the concern for keeping alive &quot;the real thing&quot; in historic ships, as Mr. Mallory had done with such resounding success at Mystic. He said that the trustees&#39; ideas would be mailed to the whole membership for their consideration, and would contribute to a long-range plan for the Society&#39;s future , to be reviewed at the Annual Meeting next spring. Schuyler M. Meyer, Jr., previous chairman, reported earlier in the evening on the progress of his work with the educational trips of the tug Urger on New York State canals, and introduced Kim Shevlin, manager of the project, which as NMHS President Peter Stanford remarked, had spread its wings in splendid fashion since leaving the aegis of the NMHS, under which it had been nurtured in the early years. Among other projects discussed was the proposed building of a sailing replica of the slave ship Amistad, under the chairmanship of NMHS Trustee Warren Marr II. Revell Carr, president of Mystic Seaport Museum, enthusiastically confirmed the museum&#39; s readiness to build the ship as plans and funding developed. So, in a forward-looking manner, the first thirty years of NMHS drew to a close. PS

Member&#39;s lounge on the topdeck of the MIV Commander during our Fall Foliage Cruise.

BULLETIN: The Normandy Convoy Will Sail! Congresswoman Helen Delich Bentley &#39;s ships. He announced that the American Navy League and other maritime leadbill providing funding for two World War Merchant Marine Memorial, which he ers , pledged support for thi s vital effort. II Liberty ships and one Victory ship to heads, is campaigning for the additional &quot;In England and Europe,&quot; said Adsteam to Nonnandy this spring to com- dollars needed for the Liberty John W. miral King, &quot;the importance of these memorate the 50th annjversary of the D- Brown in Baltimore and the Lane Victory ships and what they did is better recogDay invasion of France (launched on 6 in San Diego. The Liberty Jeremiah nized than it is in this country, which June 1944), was adopted by the House, O&#39; Brien, in San Francisco, will pursue an built and sai led the ships. To those on the cleared its hurdles in the Senate (as part of independent funding drive, while coordi- other side of the world, the ships reprethe Coast Guard appropriations bill) and nating closely with the other two ships. sented a life line of hope in this century &#39;s was signed into law on 20 December. Adm iral King thanked NMHS mem- most terrible wars.&quot; Inquiries and conAt the NMHS James Monroe Lun- bers who had weighed in in support of tributions should be sent to the taxcheon held on 5 January at the Whitehall the Bentley bill , and welcomed NMHS exempt American Merchant Mariners &#39; Cl ub in Lower Manhattan, Rear Admiral participation in the citizen funding ef- Memorial, Inc., 65 Broadway, NY NY Thomas King, USMS (ret.) said that pro- fort. Those present at the lunch , includ- 10006 for the Brown and Lane Victory, ceedsofthebillfromscrappingoutmoded ing Brian McAllister of McAllister or to National Liberty Ship Memorial, reserve fleet ships would come to some Brothers Towing, Richard W. Scheuing, Fort Mason Bldg. A., San Francisco, CA $750,000 for each of the three convoy president of the Empire Region of the 94123 for the Jeremiah O&#39; Brien. PS