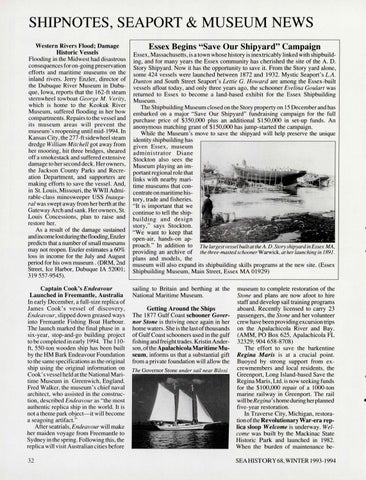 SHIPNOTES, SEAPORT &amp; MUSEUM NEWS Western Rivers Flood; Damage Historic Vessels Flooding in the Midwest had disastrous consequences for on-going preservation efforts and maritime museums on the inland rivers. Jerry Enzler, director of the Dubuque River Museum in Dubuque, Iowa, reports that the 162-ft steam stemwheel towboat George M . Verity, which is home to the Keokuk River Museum, suffered flooding in her bow compartments. Repairs to the vessel and its museum areas will prevent the museum&#39;s reopening until mid-1994. In Kansas City, the 277-ft sidewheel steam dredge William Mitchell got away from her mooring, hit three bridges, sheared off a smokestack and suffered extensive damage to her second deck. Her owners, the Jackson County Parks and Recreation Department, and supporters are making efforts to save the vessel. And, in St. Louis, Missouri, the WWII Admirable-class minesweeper USS Inaugural was swept away from her berth at the Gateway Arch and sank. Her owners, St. Louis Concessions, plan to raise and restore her. As a result of the damage sustained and income lost during the flooding, Enzler predicts that a number of small museums may not reopen. Enzler estimates a 60% loss in income for the July and August period for his own museum . (DRM, 2nd Street, Ice Harbor, Dubuque IA 52001; 319 557-9545). Captain Cook&#39;s Endeavour Launched in Freemantle, Australia In early December, a full-size replica of James Cook &#39;s vessel of discovery , Endeavour, slipped down greased ways into Fremantle Fishing Boat Harbour. The launch marked the final phase in a six-year, stop-and-go building project to be completed in early 1994. The 11 Oft, 550-ton wooden ship has been built by the HM Bark Endeavour Foundation to the same specifications as the original ship using the original information on Cook&#39;s vessel held at the National Maritime Museum in Greenwich, England. Fred Walker, the museum &#39;s chief naval architect, who assisted in the construction, described Endeavour as &quot;the most authentic replica ship in the world. It is not a theme park object-it will become a seagoing artifact.&quot; After seatrial s, Endeavour will make her maiden voyage from Freemantle to Sydney in the spring. Following this, the replica will visit Australian ci ties before 32

Essex Begins &quot;Save Our Shipyard&quot; Campaign Essex, Massachusetts, is a town whose history is inextricably linked with shipbuilding, and for many years the Essex community has cherished the site of the A. D. Story Shipyard. Now it has the opportunity to save it. From the Story yard alone, some 424 vessels were launched between 1872 and 1932. Mystic Seaport&#39;s L.A. Dunton and South Street Seaport&#39;s Lettie G. Howard are among the Essex-built vessels afloat today , and only three years ago, the schooner Evelina Goulart was returned to Essex to become a land-based exhibit for the Essex Shipbuilding Museum . The Shipbuilding Museum closed on the Story property on 15 December and has embarked on a major &quot;Save Our Shipyard&quot; fundraising campaign for the full purchase price of $350,000 plus an additional $150,000 in set-up funds. An anonymous matching grant of $150,000 has jump-started the campaign. While the Museum &#39; s move to save the shipyard will help preserve the unique identity shipbuilding has given Essex, museum administrator Diane Stockton also sees the Museum playing an important regional role that links with nearby maritime museums that concentrate on maritime history, trade and fisheries. &quot;It is important that we continue to tell the shipbuilding and design story,&quot; says Stockton. &quot;We want to keep that open-air, hands-on approach.&quot; In addition to The largest vessel built at the A. D. St01y shipyard in Essex MA , providing an archive of the three-masted schooner Warwick, at her launching in 1891 . plans and models , the museum will also expand its shipbuilding skills programs at the new site. (Essex Shipbuilding Museum, Main Street, Essex MA 01929) sailing to Britain and berthing at the National Maritime Museum. Getting Around the Ships The 1877 Gulf Coast schooner Governor Stone is thriving once again in her home waters. She is the last of thousands of Gulf Coast schooners used in the gulf fishing and freight trades. Kristin Anderson, of the Apalachicola Maritime Museum, informs us that a substantial gift from a private foundation will allow the The Governor Stone under sail near Biloxi

museum to complete restoration of the Stone and plans are now afoot to hire staff and develop sail training programs aboard. Recently licensed to carry 23 passengers, the Stone and her volunteer crew have been providing excursion trips on the Apalachicola River and Bay. (AMM, PO Box 625, Apalachicola FL 32329; 904 658-8708) The effort to save the barkentine Regina Maris is at a crucial point. Buoyed by strong support from excrewmembers and local residents, the Greenport, Long Island-based Save the Regina Maris, Ltd. is now seeking funds for the $100,000 repair of a 1000-ton marine railway in Greenport. The rail will beRegina&#39;s home during her planned five-year restoration. In Traverse City, Michigan, restoration of the Revolutionary War-era replica sloop Welcome is underway. Welcome was built by the Mackinac State Historic Park and launched in 1982. When the burden of maintenance beSEAHISTORY68, WINTER 1993-1994