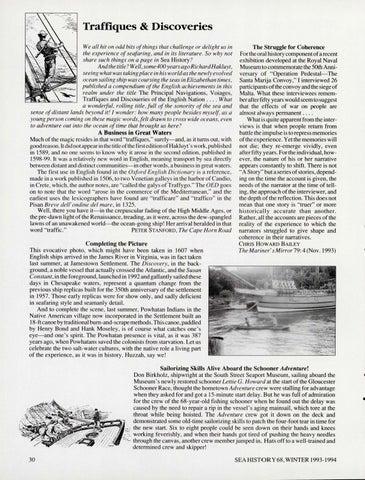 We all hit on odd bits of things that challenge or delight us in the experience of seafaring, and in its literature. So why not share such things on a page in Sea History ? And the title? Well, some400 years ago Richard Hakluyt , seeing what was taking place in his world as the newly evolved ocean sailing ship was coursing the seas in Elizabethan times , published a compendium of the English achievements in this realm under the title The Principal Navigations, Voiages, Traffiques and Discoueries of the English Nation .... What a wonderful, rolling title.full of the sonority of the sea and sense of distant lands beyond it! I wonder: how many people besides myself, as a young person coming on these magic words.felt drawn to cross wide oceans, even to adventure out into the ocean of time that brought us here?

A Business in Great Waters Much of the magic resides in that word &quot;traffiques,&quot; surely-and, as it turns out, with good reason. It did not appear in the title of the first edition ofHakluyt&#39;s work, published in 1589, and no one seems to know why it arose in the second edition, published in 1598-99. It was a relatively new word in English, meaning transport by sea directly between distant and di stinct communities-in other words, a business in great waters. The first use in English found in the Oxford English Dictionary is a reference, made in a work published in 1506, to two Venetian galleys in the harbor of Candio, in Crete, which, the author notes , are &quot;called the galys ofTraffygo.&quot; The OED goes on to note that the word &quot;arose in the commerce of the Mediterranean,&quot; and the earliest uses the lexicographers have found are &quot;trafficare&quot; and &quot;traffico&quot; in the Pisan Breve dell&#39; ondine del mare, in 1325. Well, there you have it-in the crepuscular fading of the High Middle Ages , or the pre-dawn light of the Renaissance, treading, as it were, across the dew-spangled lawns of an unawakened world-the ocean-going ship! Her arrival heralded in that PETER STANFORD, The Cape Horn Road word &quot;traffic.&quot;

Completing the Picture This evocative photo, which might have been taken in 1607 when English ships arrived in the James River in Virginia, was in fact taken last summer, at Jamestown Settlement. The Discovery, in the background, a noble vessel that actually crossed the Atlantic, and the Susan Constant, in the foreground, launched in 1992 and gallantly sailed these days in Chesapeake waters, represent a quantum change from the previous ship replicas built for the 350th anniversary of the settlement in 1957. Those early replicas were for show only, and sadly deficient in seafaring style and seamanly detail. And to complete the scene, last summer, Powhatan Indians in the Native American village now incorporated in the Settlement built an 18-ft canoe by traditional bum-and-scrape methods. This canoe, paddled by Henry Bond and Hank Moseley, is of course what catches one &#39;s eye-and one&#39;s spirit. The Powhatan presence is vital, as it was 387 years ago, when Powhatans saved the colonists from starvation. Let us celebrate the two salt-water cultures, with the native role a living part of the experience, as it was in history. Huzzah , say we!

The Struggle for Coherence For the oral history component of a recent exhibition developed at the Royal Naval Museum to commemorate the 50th Anniversary of &quot;Operation Pedestal-The Santa Marija Convoy,&quot; I interviewed 26 participants of the convoy and the siege of Malta. What these interviewees remember after fifty years would seem to suggest that the effects of war on people are almost always permanent .... What is quite apparent from the interviews is that when people return from battle the impulse is to repress memories of the experience.Yet the memories will not die; they re-emerge vividly, even after fifty years. For the individual, however, the nature of his or her narrative appears constantly to shift. There is not &quot;A Story&quot; but a series of stories, depending on the time the account is given, the needs of the narrator at the time of telling, the approach of the interviewer, and the depth of the reflection. This does not mean that one story is &quot;truer&quot; or more hi storically accurate than another. Rather, all the accounts are pieces of the reality of the experience to which the narrators struggled to give shape and coherence in their narratives. CHRIS How ARD BAILEY The Mariner&#39;s Mirror19: 4(Nov. 1993)

Sailorizing Skills Alive Aboard the Schooner Adventure! Don Birkholz, shipwright at the South Street Seaport Museum, sailing aboard the Museum &#39;s newly restored schooner Lettie G. Howard at the start of the Gloucester Schooner Race, thought the hometown Adventure crew were stalling for advantage when they asked for and got a 15-minute start delay. But he was full of admiration for the crew of the 68-year-old fishing schooner when he found out the delay was caused by the need to repair a rip in the vessel&#39;s aging mainsail, which tore at the throat while being hoisted. The Adventure crew got it down on the deck and demonstrated some old-time sailorizing skills to patch the four-foot tear in time for ,;_~ the new start. Six to eight people could be seen down on their hands and knees _;_:: working feverishly, and when their hands got tired of pushing the heavy needles &#39;-~._ through the canvas, another crew member jumped in. Hats off to a well-trained and determined crew and skipper! 30