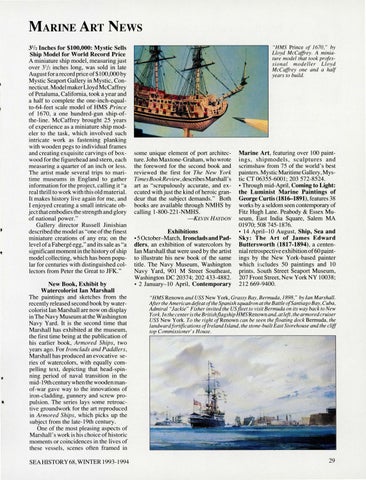 3 1/i Inches for $100,000: Mystic Sells Ship Model for World Record Price A miniature ship model , measuring just over 3 1/2 inches long, was sold in late August for a record price of$100,000 by Mystic Seaport Gallery in Mystic, Connecticut. Model maker Lloyd McCaffrey of Petaluma, California, took a year and a half to complete the one-inch-equalto-64-feet scale model of HMS Prince of 1670, a one hundred-gun ship-ofthe-line. McCaffrey brought 25 years of experience as a miniature ship modeler to the task, which involved such intricate work as fastening planking with wooden pegs to individual frames and creating exquisite carvings of boxwood for the figurehead and stem, each measuring a quarter of an inch or less. The artist made several trips to mari time museums in England to gather information for the project, calling it &quot;a real thrill to work with this old material. It makes hi story live again for me, and I enjoyed creating a small intricate object that embodies the strength and glory of national power.&quot; Gallery director Russell Jini shian described the model as &quot;one of the finest miniature creations of any era; on the level of a Faberge egg,&quot; and its sale as &quot;a significant moment in the hi story of ship model collecting, which has been popular for centuries with distingui shed collectors from Peter the Great to JFK. &quot; New Book, Exhibit by Watercolorist Ian Marshall The paintings and sketches from the recently released second book by watercolorist Ian Marshall are now on display in The Navy Museum at the Washington Navy Yard. It is the second time that Marshall has exhibited at the museum , the first time being at the publication of hi s earlier book, Armored Ships, two years ago. For Ironclads and Paddlers, Marshall has produced an evocative series of watercolors, with equally compelling text, depicting that head-spinning period of naval transition in the mid-19th century when the wooden manof-war gave way to the innovations of iron-cladding, gunnery and screw propul sion. The series lays some retroactive groundwork for the art reproduced in Armored Ships, which picks up the subject from the late-19th century . One of the most pleas ing aspects of Marshall &#39; s work is his choice of historic moments or coincidences in the lives of these vessels, scenes often framed in SEAHISTORY68,WINTER 1993-1994

&quot;HMS Prince of 1670,&quot; by Lloyd McCaffrey. A miniature model that took professiona l modeller Lloyd M cCaffrey one and a half years to build.

some unique element of port architecture. John Max tone-Graham, who wrote the foreword for the second book and rev iewed the first for The New York Times Book Review, describes Marshall &#39;s art as &quot;scrupulously accurate, and executed with just the kind of heroic grandeur that the subject demands.&quot; Both books are available through NMHS by calling 1-800-22 1-NMHS. -

&quot;HMS Renown and USS New York, Grassy Bay , B ermuda, 1898,&quot; by Ian Marshall. After the American defeat of the Spanish squadron at the Battle ofSantiago Bay, Cuba , Admiral &quot;Ja ckie&quot; Fisher invited the US fl eet to visit Bermuda on its way back to New York. In the center is the Britishflagship HMS Renown and,at left, the armored cruiser USS New York . To the right of Renown can be seen the floating dock Bermuda, the landward fortifications ofIreland Island, the stone-built East Storehouse and the cliff top Commissioner&#39;s House.