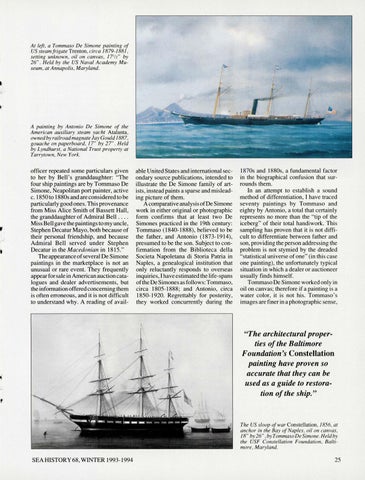 officer repeated some particulars given to her by Bell&#39;s granddaughter: &quot;The four ship paintings are by Tommaso De Simone, Neapolitan port painter, active c. 1850 to 1880s and are considered to be particularly good ones. This provenance from Miss Alice Smith of Bassett Hall, the granddaughter of Admiral Bell .... Miss Bell gave the paintings to my uncle, Stephen Decatur Mayo, both because of their personal friendship, and because Admiral Bell served under Stephen Decatur in the Macedonian in 1815.&quot; The appearance of several De Simone paintings in the marketplace is not an unusual or rare event. They frequently appear for sale in American auction catalogues and dealer advertisements, but the information offered concerning them is often erroneous, and it is not difficult to understand why. A reading of avail-

able United States and international secondary source publications, intended to illustrate the De Simone family of artists, instead paints a sparse and misleading picture of them. A comparative analysis of De Simone work in either original or photographic form confirms that at least two De Simones practiced in the 19th century: Tommaso (1840-1888), believed to be the father, and Antonio (1873-1914), presumed to be the son. Subject to confirmation from the Biblioteca della Societa Napoletana di Storia Patria in Naples, a genealogical institution that only reluctantly responds to overseas inquiries, I have estimated the life-spans of the De Simones as follows: Tommaso, circa 1805-1888; and Antonio, circa 1850-1920. Regrettably for posterity, they worked concurrently during the

1870s and 1880s, a fundamental factor in the biographical confusion that surrounds them. In an attempt to establish a sound method of differentiation, I have traced seventy paintings by Tommaso and eighty by Antonio, a total that certainly represents no more than the &quot;tip of the iceberg&quot; of their total handiwork. This sampling has proven that it is not difficult to differentiate between father and son, providing the person addressing the problem is not stymied by the dreaded &quot;statistical universe of one&quot; (in this case one painting), the unfortunately typical situation in which a dealer or auctioneer usually finds himself. Tommaso De Simone worked only in oil on canvas; therefore if a painting is a water color, it is not his. Tommaso &#39;s images are finer in a photographic sense,

&quot;The architectural properties of the Baltimore Foundation&#39;s Constellation painting have proven so accurate that they can be used as a guide to restoration of the ship.&quot;

The US sloop of war Constellation, 1856, at anchor in the Bay of Naples , oil on canvas, 18&quot; by 26&quot; , by Tommaso De Simone .Held by the USF Constellation Foundation, Baltimore, Maryland.