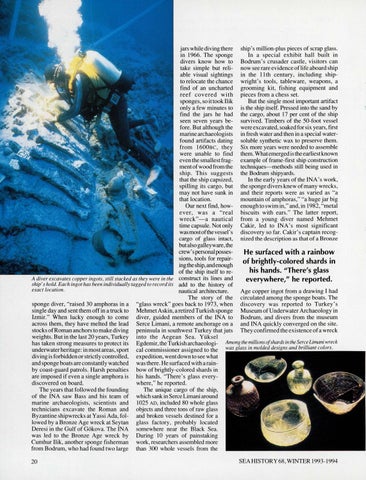 jars while diving there ship&#39;s million-plus pieces of scrap glass. in 1966. The sponge In a special exhibit hall built in divers know how to Bodrum &#39;s crusader castle, visitors can take simple but reli- now see rare evidence oflife aboard ship able visual sightings in the 11th century, including shipto relocate the chance wright&#39;s tools, tableware, weapons, a find of an uncharted grooming kit, fishing equipment and reef covered with pieces from a chess set. But the single most important artifact sponges, so it took Ilik only a few minutes to is the ship itself. Pressed into the sand by find the jars he had the cargo, about 17 per cent of the ship seen seven years be- survived. Timbers of the 50-foot vessel fore. But although the were excavated, soaked for six years, first marine archaeologists in fresh water and then in a special waterfound artifacts dating soluble synthetic wax to preserve them. from l 600BC, they Six more years were needed to assemble were unable to find them. Whatemerged is the earliest known even the smallest frag- example of frame-first ship construction ment of wood from the techniques- methods still being used in ship. This suggests the Bodrum shipyards. that the ship capsized, In the early years of the INA&#39;s work, spilling its cargo, but the sponge divers knew of many wrecks , may not have sunk in and their reports were as varied as &quot;a that location. mountain of amphoras,&quot; &quot;a huge jar big Our next find , how- enough to swim in,&quot; and, in 1982, &quot;metal ever, was a &quot;real biscuits with ears.&quot; The latter report, wreck&quot;-a nautical from a young diver named Mehmet time capsule. Not only Cakir, led to INA &#39;s most significant was most of the vessel&#39;s discovery so far. Cakir&#39;s captain recogcargo of glass intact, nized the description as that of a Bronze but also galleyware, the crew&#39;s personal possesHe surfaced with a rainbow sions, tools for repairof brightly-colored shards in ingtheship,andenough his hands. &quot;There&#39;s glass of the ship itself to reA diver excavates copper ingots, still stacked as they were in the construct its lines and everywhere,&quot; he reported. ship&#39;s hold. Each ingot has been individually tagged to record its add to the history of exact location. nautical architecture. Age copper ingot from a drawing I had The story of the circulated among the sponge boats. The sponge diver, &quot;raised 30 amphoras in a &quot;glass wreck&quot; goes back to 1973 , when discovery was reported to Turkey&#39;s single day and sent them off in a truck to Mehmet Askin, a retired Turkish sponge Museum of Underwater Archaeology in Izmir.&quot; When lucky enough to come diver, guided members of the INA to Bodrum, and divers from the museum across them, they have melted the lead Serce Limani, a remote anchorage on a and INA quickly converged on the site. stocks of Roman anchors to make diving peninsula in southwest Turkey that juts They confirmed the existence of a wreck weights. But in the last 20 years, Turkey into the Aegean Sea. Ytiksel has taken strong measures to protect its Egdemir, the Turkish archaeologi- Among the millions ofshards in the Serce limani wreck underwater heritage: in most areas, sport cal commissioner assigned to the was glass in molded designs and brilliant colors. diving is forbidden or strictly controlled, expedition, went down to see what and sponge boats are constant! y watched was there. He surfaced with a rainby coast-guard patrols. Harsh penalties bow of brightly-colored shards in are imposed if even a single amphora is his hands. &quot;There &#39;s glass everydiscovered on board. where,&quot; he reported. The unique cargo of the ship, The years that followed the founding of the INA saw Bass and his team of which sank in Serce Limani around marine archaeologists, scientists and 1025 AD, included 80 whole glass technicians excavate the Roman and objects and three tons of raw glass Byzantine shipwrecks at Yassi Ada, fol- and broken vessels destined for a lowed by a Bronze Age wreck at Seytan glass factory, probably located Deresi in the Gulf of Gokova. The INA somewhere near the Black Sea. was led to the Bronze Age wreck by During 10 years of painstaking Cumhur Ilik, another sponge fisherman work, researchers assembled more from Bodrum, who had found two large than 300 whole vessels from the 20