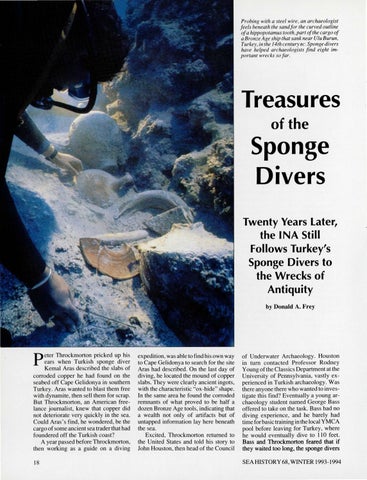 Probing with a steel wire, an archaeologist feels beneath the sand for the curved outline of a hippopotamus tooth, part of the cargo of a Bronze Age ship that sank near Ulu Burun, Turkey, in the 14th century BC . Sponge divers have helped archaeologists find eight important wrecks so far.

Sponge Divers Twenty Years Later, the I NA Still Follows Turkey's Sponge Divers to the Wrecks of Antiquity by Donald A. Frey

eter Throckmorton pricked up hi s ears when Turkish sponge diver Kemal Aras described the slabs of corroded copper he had found on the seabed off Cape Gelidonya in southern Turkey. Aras wanted to blast them free with dynamite, then sell them for scrap. But Throckmorton, an American freelance journalist, knew that copper did not deteriorate very quickly in the sea. Could Aras's find, he wondered , be the cargo of some ancient sea trader that had foundered off the Turki sh coast? A year passed before Throckmorton, then working as a guide on a diving

expedition, was able to find his own way to Cape Gelidonya to search for the site Aras had described. On the last day of diving, he located the mound of copper slabs. They were clearly ancient ingots, with the characteristic "ox -hide" shape. In the same area he found the corroded remnants of what proved to be half a dozen Bronze Age tools, indicating that a wealth not only of artifacts but of untapped information lay here beneath the sea. Excited, Throckmorton returned to the United States and told hi s story to John Houston, then head of the Council

of Underwater Archaeology. Houston in turn contacted Professor Rodney Young of the Classics Department at the University of Pennsylvania, vastly experienced in Turkish archaeology. Was there anyone there who wanted to investigate thi s find? Eventually a young archaeology student named George Bass offered to take on the task. Bass had no diving experience, and he barely had time for basic training in the local YMCA pool before leaving for Turkey , where he would eventually dive to 110 feet. Bass and Throckmorton feared that if they waited too long, the sponge divers SEAHISTORY68, WINTER 1993-1994