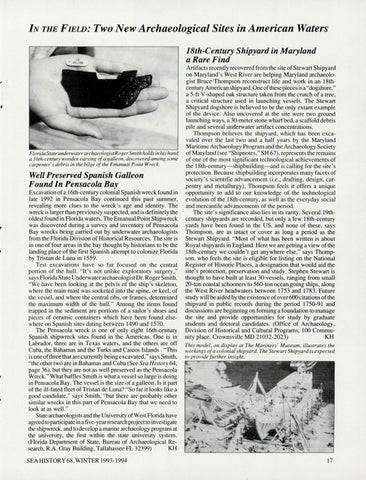 Florida State unde1water archaeologist Roger Smith holds in his hand a J6th-century wooden carving of a galleon, discovered among some carpenter&#39;s debris in the bilge of the ÂŁmanual Point Wreck.

Well Preserved Spanish Galleon Found In Pensacola Bay Excavation of a 16th-century colonial Spanish wreck found in late 1992 in Pensacola Bay continued this past summer, revealing more clues to the wreck &#39; s age and identity. The wreck is larger than previously suspected, and is definitely the oldest found in Florida waters. The Emanual Point Shipwreck was discovered during a survey and inventory of Pensacola Bay wrecks being carried out by underwater archaeologists from the Florida Division of Historical Resources . The site is in one of four areas in the bay thought by historians to be the landing place of the first Spanish attempt to colonize Florida by Tristan de Luna in 1559. Test excavations have so far focused on the central portion of the hull. &quot;It &#39;s not unlike exploratory surgery,&quot; says Florida State Underwater archaeologist Dr. Roger Smith. &quot;We have been looking at the pelvis of the ship&#39;s skeleton, where the main mast was socketed into the spine, or keel, of the vessel, and where the central ribs, or frames, determined the maximum width of the hull.&quot; Among the items found trapped in the sediment are portions of a sailor&#39;s shoes and pieces of ceramic containers which have been found elsewhere on Spanish sites dating between 1490 and 1570. The Pensacola wreck is one of only eight 16th-century Spanish shipwreck sites found in the Americas. One is in Labrador, three are in Texas waters, and the others are off Cuba, the Bahamas and the Turks and Caicos Islands . &quot;This is one of three that are currently being excavated,&quot; says Smith, &quot;the other two are in Bahamas and Cuba (See Sea History 64, page 36), but they are not as well preserved as the Pensacola Wreck.&quot; What baffles Smith is what a vessel so large is doing in Pensacola Bay. The vessel is the size of a galleon. Is it part of the ill-fated fleet of Tristan de Luna? &quot;So far it looks like a good candidate,&quot; says Smith, &quot;but there are probably other similar wrecks in this part of Pensacola Bay that we need to look at as well.&quot; State archaeologists and the University ofWestFlorida have agreed to participate in a five-year research project to investigate the shipwreck, and to develop a marine archaeology program at the university, the fust within the state university system. (Florida Department of State, Bureau of Archaeological Research, R.A. Gray Building, Tallahassee FL 32399) KH SEAHISTORY68, WINTER 1993-1994

Artifacts recently recovered from the site of Stewart Shipyard on Maryland&#39;s West River are helping Maryland archaeologist Bruce Thompson reconstruct life and work in an 18thcentury American shipyard. One of these pieces is a &quot;dogshore,&quot; a 5-ft V-shaped oak structure taken from the crutch of a tree, a critical structure used in launching vessels. The Stewart Shipyard dogshore is believed to be the only extant example of the device. Also uncovered at the site were two ground launching ways, a 30-meter stone wharf bed, a scaffold debris pile and several underwater artifact concentrations. Thompson believes the shipyard, which has been excavated over the last two and a half years by the Maryland Maritime Archaeology Program and the Archaeology Society of Maryland (see &quot;Shipnotes,&quot; SH 67), represents the remains of one of the most significant technological achievements of the 18th-century- shipbuilding-and is calling for the site&#39;s protection. Because shipbuilding incorporates many facets of society&#39;s scientific advancement (i .e., drafting, design, carpentry and metallurgy), Thompson feels it offers a unique opportunity to add to our knowledge of the technological evolution of the 18th-century, as well as the everyday social and mercantile advancements of the period. The site &#39; s significance also lies in its rarity. Several 19thcentury shipyards are recorded, but only a few 18th-century yards have been found in the US , and none of these, says Thompson, are as intact or cover as long a period as the Stewart Shipyard. &quot;Most of what has been written is about Royal shipyards in England. Here we are getting a view of the 18th-century we couldn&#39;t get anywhere else,&quot; says Thompson, who feels the site is eligible for listing on the National Register of Historic Places, a designation that would aid the site&#39;s protection, preservation and study. Stephen Stewart is thought to have built at least 30 vessels, ranging from small 20-ton coastal schooners to 560-ton ocean going ships, along the West River headwaters between 1753 and 1783. Future study will be aided by the existence of over 600 citations of the shipyard in public records during the period 1750-91 and discussions are beginning on forming a foundation to manage the site and provide opportunities for study by graduate students and doctoral candidates. (Office of Archaeology, Division of Historical and Cultural Programs, 100 Community place, Crownsville MD 21032-2023) KH This model, on display at The Mariners &#39; Museum , illustrates the workings of a colonial shipyard. The Stewart Shipyard is expected to provide furth er insight.