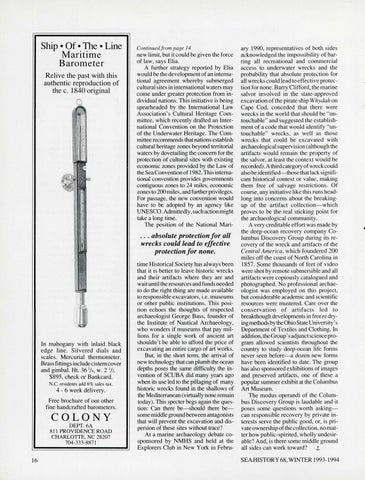 Ship • Of• The • Line Maritime Barometer Relive the past with this authentic reproduction of the c. 1840 original

new limit, but it could be given the force of law, says Elia. A further strategy reported by Elia would be the development of an international agreement whereby submerged cultural sites in international waters may come under greater protection from individual nations. This initiative is being spearheaded by the International Law Association&#39;s Cultural Heritage Committee, which recently drafted an International Convention on the Protection of the Underwater Heritage. The Committee recommends that nations establish cultural heritage zones beyond territorial waters by dovetailing the concern for the protection of cultural sites with existing economic zones provided by the Law of the Sea Convention of 1982. This international convention provides governments contiguous zones to 24 miles, economic zones to 200 miles, and further privileges. For passage, the new convention would have to be adopted by an agency like UNESCO. Admittedly, such action might take a long time. The position of the National Mari-

4 - 6 week delivery. Free brochure of our other fine handcrafted barometers.

time Historical Society has always been that it is better to leave historic wrecks and their artifacts where they are and wait until the resources and funds needed to do the right thing are made available to responsible excavators, i.e. museums or other public institutions. This position echoes the thoughts of respected archaeologist George Bass, founder of the Institute of Nautical Archaeology, who wonders if museums that pay millions for a single work of ancient art shouldn &#39;t be able to afford the price of excavating an entire cargo of art works . But, in the short term, the arrival of new technology that can plumb the ocean depths poses the same difficulty the invention of SCUBA did many years ago when its use led to the pillaging of many historic wrecks found in the shallows of the Mediterranean (virtually none remain today). This specter begs again the question: Can there be-should there besome middle ground between antagonists that will prevent the excavation and dispersion of these sites without trace? At a marine archaeology debate cosponsored by NMHS and held at the Explorers Club in New York in Febru-

ary 1990, representatives of both sides acknowledged the impossibility of barring all recreational and commercial access to underwater wrecks and the probability that absolute protection for all wrecks could lead to effective protection for none. Barry Clifford , the marine salvor involved in the state-approved excavation of the pirate ship Whydah on Cape Cod, conceded that there were wrecks in the world that should be &quot;untouchable&quot; and suggested the establishment of a code that would identify &quot; untouchable&quot; wrecks, as well as those wrecks that could be excavated with archaeological supervision (although the artifacts would remain the property of the salvor, at least the context would be recorded). A third category of wreck could also be identified- those that lack significant historical context or value, making them free of salvage restrictions. Of course, any initiative like this runs headlong into concerns about the breakingup of the artifact collection-which proves to be the real sticking point for the archaeological community. A very creditable effort was made by the deep-ocean recovery company Columbus Discovery Group during its recovery of the wreck and artifacts of the Central America, which foundered 200 miles off the coast of North Carolina in 1857. Some thousands of feet of video were shot by remote submersible and all artifacts were copiously catalogued and photographed. No professional archaeologist was employed on this project, but considerable academic and scientific resources were mustered. Care over the conservation of artifacts led to breakthough developments in freeze drying methods by the Ohio State University &#39;s Department of Textiles and Clothing. In adqition, the Group&#39;s adjunct science program allowed scientists throughout the country to study deep-ocean life forms never seen before-a dozen new forms have been identified to date. The group has also sponsored exhibitions of images and preserved artifacts, one of these a popular summer exhibit at the Columbus Art Museum. The modus operandi of the Columbus Discovery Group is laudable and it poses some questions worth askingcan responsible recovery by private interests serve the public good, or, is private ownership of the collection, no matter how public-spirited, wholly undesirable? And, is there some middle ground all sides can w0rk toward? ,t SEA HISTORY 68 , WINTER 1993-1994