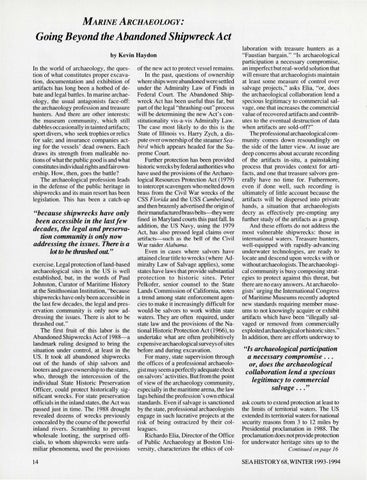 Going Beyond the Abandoned Shipwreck Act by Kevin Haydon In the world of archaeology, the question of what constitutes proper excavation, documentation and exhibition of artifacts has long been a hotbed of debate and legal battles. In marine archaeology, the usual antagonists face-off: the archaeology profession and treasure hunters. And there are other interests: the museum community, which still dabbles occasionally in tainted artifacts; sport divers, who seek trophies or relics for sale; and insurance companies acting for the vessels&#39; dead owners. Each draws its strength from malleable notions of what the public good is and what constitutes individual rights and fairownership. How, then, goes the battle? The archaeological profession leads in the defense of the public heritage in shipwrecks and its main resort has been legislation. This has been a catch-up

of the new act to protect vessel remains. In the past, questions of ownership where ships were abandoned were settled under the Admiralty Law of Finds in Federal Court. The Abandoned Shipwreck Act has been useful thus far, but part of the legal &quot;thrashing-out&quot; process will be determining the new Act&#39;s constitutionality vis-a-v is Admiralty Law. The case most likely to do this is the State of Illinois vs. Harry Zych, a dispute over ownership of the steamer Seabird which appears headed for the Supreme Court. Further protection has been provided historic wrecks by federal authorities who have used the provisions of the Archaeological Resources Protection Act (1979) to intercept scavengers who melted down brass from the Civil War wrecks of the CSS Florida and the USS Cumberland, and then brazenly advertised the origin of their manufactured brass belts-they were fined in Maryland courts this past fall. In addition, the US Navy, using the 1979 Act, has also pressed legal claims over artifacts-such as the bell of the Civil War raider Alabama. Even in cases where salvors have attained clear title to wrecks (where Admiralty Law of Salvage applies), some states have laws that provide substantial protection to hi storic sites. Peter Pelkofer, senior counsel to the State Lands Commission of California, notes a trend among state enforcement agencies to make it increasingly difficult for would-be salvors to work within state waters. They are often required, under state law and the provisions of the National Historic Protection Act (1966), to undertake what are often prohibitively expensive archaeological surveys of sites before and during excavation. For many, state supervision through the offices of a professional archaeologist may seem a perfectly adequate check on salvors&#39; activities. But from the point of view of the archaeology community, especially in the maritime arena, the law lags behind the profession &#39;s own ethical standards. Even if salvage is sanctioned by the state, professional archaeologists engage in such lucrative projects at the risk of being ostracized by their colleagues. Richardo Elia, Director of the Office of Public Archaeology at Boston University, characterizes the ethics of col-

laboration with treasure hunters as a &quot;Faustian bargain.&quot; &quot;Is archaeological participation a necessary compromise, an imperfect but real -world sol ution that will ensure that archaeologists maintain at least some measure of control over salvage projects,&quot; asks Elia, &quot;or, does the archaeological collaboration lend a specious legitimacy to commercial salvage, one that increases the commercial value of recovered artifacts and contributes to the eventual destruction of data when artifacts are sold-off?&quot; The professional archaeological community comes down resoundingly on the side of the latter view. At issue are deep concerns about accurate recording of the artifacts in-situ, a painstaking process that provides context for artifacts, and one that treasure salvors generally have no time for. Futhermore, even if done well , such recording is ultimately of little account because the artifacts will be dispersed into private hands, a situation that archaeologists decry as effectively pre-empting any further study of the artifacts as a group. And these efforts do not address the most vulnerable shipwrecks: those in international waters. Treasure hunters, well-equipped with rapidly-advancing underwater technologies, are ready to locate and descend upon wrecks with or without archaeologists. The archaeological community is busy composing strategies to protect against this threat, but there are no easy answers. At archaeologists&#39; urging the International Congress of Maritime Museums recently adopted new standards requiring member museums to not knowingly acquire or exhibit artifacts which have been &quot;illegally salvaged or removed from commercially exploited archaeological or historic sites.&quot; In addition, there are efforts underway to

&quot;ls archaeological participation a necessary compromise ... or, does the archaeological collaboration lend a specious legitimacy to commercial salvage .. .&quot; ask courts to extend protection at least to the limits of territorial waters. The US extended its territorial waters fornational security reasons from 3 to 12 miles by Presidential proclamation in 1988. The proclamation does not provide protection for underwater heritage sites up to the Continued on page 16