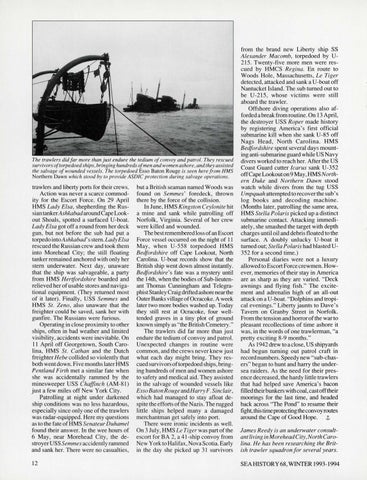 The trawlers didfar more than just endure the tedium of convoy and patrol. They rescued survivors oftorpedoed ships, bringing hundreds ofmen and women ashore , and they assisted the salvage of wounded vessels. The torpedoed Esso Baton Rouge is seen here from HMS Northern Dawn which stood by to provide ASDIC protection during salvage operations.

trawlers and liberty ports for their crews. Action was never a scarce commodity for the Escort Force. On 29 April HMS Lady Elsa , shepherding the Russian tanker Ashkabad around Cape Lookout Shoals, spotted a surfaced U-boat. Lady Elsa got off a round from her deck gun, but not before the sub had put a torpedo intoAshkabad' s stem. Lady Elsa rescued the Russian crew and took them into Morehead City; the still floating tanker remained anchored with only her stem underwater. Next day, unaware that the ship was salvageable, a party from HMS Hertfordshire boarded and relieved her of usable stores and navigational equipment. (They returned most of it later). Finally, USS Semmes and HMS St. Zeno, also unaware that the freighter could be saved, sank her with gunfire. The Russians were furious. Operating in close proximity to other ships, often in bad weather and limited visibility, accidents were inevitable. On 11 April off Georgetown, South Carolina, HMS St. Cathan and the Dutch freighter Hebe collided so violently that both went down. Five months later HMS Pentland Firth met a similar fate when she was accidentally rammed by the minesweeper USS Chaffinch (AM-81) just a few miles off New York City. Patrolling at night under darkened ship conditions was no less hazardous, especially since only one of the trawlers was radar-equipped. Here my questions as to the fate of HMS Senateur Duhamel found their answer. In the wee hours of 6 May, near Morehead City, the destroyer USS Semmes accidently rammed and sank her. There were no casualties, 12

but a British seaman named Woods was found on Semmes' foredeck, thrown there by the force of the collision. In June, HMS Kingston Ceylonite hit a mine and sank while patrolling off Norfolk, Virginia. Several of her crew were killed and wounded. The best remembered loss of an Escort Force vessel occurred on the night of 11 May , when U-558 torpedoed HMS Bedfordshire off Cape Lookout, North Carolina. U-boat records show that the British ship went down almost instantly. Bedfordshire's fate was a mystery until the 14th, when the bodies of Sub-lieutenant Thomas Cunningham and Telegraphist Stanley Craig drifted ashore near the Outer Banks village ofOcracoke. A week later two more bodies washed up. Today they still rest at Ocracoke, four welltended graves in a tiny plot of ground known simply as "the British Cemetery." The trawlers did far more than just endure the tedium of convoy and patrol. Unexpected changes in routine were common, and the crews never knew just what each day might bring. They rescued survivors of torpedoed ships, bringing hundreds of men and women ashore to safety and medical aid. They assisted in the salvage of wounded vessels like Es so Baton Rouge andHarry F. Sinclair, which had managed to stay afloat despite the efforts of the Nazis. The rugged little ships helped many a damaged merchantman get safely into port. There were ironic incidents as well. On 3 July, HMS Le Tiger was part of the escort for BA 2, a 41-ship convoy from New York to Halifax, Nova Scotia. Early in the day she picked up 31 survivors

from the brand new Liberty ship SS Alexander Macomb , torpedoed by U215. Twenty-five more men were rescued by HMCS Regina. En route to Woods Hole, Massachusetts, Le Tiger detected, attacked and sank a U-boat off Nantucket Island. The sub turned out to be U-215, whose victims were still aboard the trawler. Offshore diving operations also afforded a break from routine. On 13 April, the destroyer USS Roper made history by registering America's first official submarine kill when she sank U-85 off Nags Head, North Carolina. HMS Bedfordshire spent several days mounting anti-submarine guard while US Navy divers worked to reach her. After the US Coast Guard cutter Icarus sank U-352 off Cape Lookout on 9 May, HMS Northern Duke and Northern Dawn stood watch while divers from the tug USS Umpquah attempted to recover the sub's log books and decoding machine. (Months later, patrolling the same area, HMS Stella Polaris picked up a distinct submarine contact. Attacking immediately, she smashed the target with depth charges until oil and debris floated to the surface. A doubly unlucky U-boat it turned out; Stella Polaris had blasted U352 for a second time.) Personal diaries were not a luxury allowed to Escort Force crewmen. However, memories of their stay in America are as sharp as they are varied. "Deck awnings and flying fish." The excitement and adrenalin high of an all-out attack on a U-boat. "Dolphins and tropical evenings." Liberty jaunts to Dave ' s Tavern on Granby Street in Norfolk. From the tension and horror of the war to pleasant recollections of time ashore it was, in the words of one trawlerman, "a pretty exciting 8-9 months. " As 1942drew to a close, US shipyards had begun turning out patrol craft in record numbers. Speedy new "sub-chasers" began to hunt and harry the undersea raiders. As the need for their presence decreased, the hardy little trawlers that had helped save America's bacon filled their bunkers with coal, cast off their moorings for the last time, and headed back across "The Pond" to resume their fight, this time protecting the convoy routes around the Cape of Good Hope. !, James Reedy is an underwater consultant living inMoreheadCity,NorthCarolina. He has been researching the British trawler squadron for several years. SEA HISTORY 68, WINTER 1993-1994