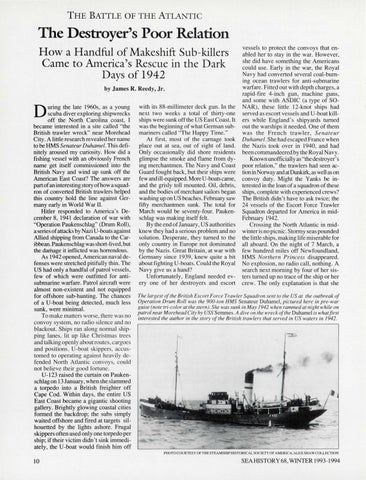 The Destroyer's Poor Relation How a Handful of Makeshift Sub-killers Came to America's Rescue in the Dark Days of 1942 by James R. Reedy, Jr. uring the late 1960s, as a young scuba diver exploring shipwrecks off the North Carolina coast, I became interested in a site called "the British trawler wreck" near Morehead City. A little research revealed her name to be HMS Senateur Duhamel. This definitely aroused my curiosity. How did a fishing vessel with an obviously French name get itself commissioned into the British Navy and wind up sunk off the American East Coast? The answers are part of an interesting story of how a squadron of converted British trawlers helped this country hold the line against Germany early in World War II. Hitler responded to America' s December 8, 1941 declaration of war with "Operation Paukenschlag" (Drum Roll), a series of attacks by Nazi U-boats against Allied shipping from Canada to the Caribbean. Paukenschlag was short-lived, but the damage it inflicted was horrendous. As 1942 opened, American naval defenses were stretched pitifully thin. The US had only a handful of patrol vessels, few of which were outfitted for antisubmarine warfare. Patrol aircraft were almost non-existent and not equipped for offshore sub-hunting. The chances of a U-boat being detected, much less sunk, were minimal. To make matters worse, there was no convoy system, no radio silence and no blackout. Ships ran along normal shi pping lanes, lit up like Christmas trees and talking openly abo ut routes, cargoes and positions. U-boat sk ippers, accustomed to operating against heav il y defe nded North Atlantic convoys, could not believe their good fortune. U-123 rai sed the curtain on Paukenschlag on 13 January, when she slammed a torpedo into a British freighter off Cape Cod. Within days, the entire US East Coast became a gigantic shooting gallery. Brightly glowing coastal cities formed the backdrop; the subs simply waited offshore and fired at targets silhouetted by the lights ashore. Frugal skippers often used only one torpedo per ship; if their victim didn ' t sink immediately, the U-boat would finish him off

with its 88-millimeter deck gun. In the next two weeks a total of thirty-one ships were sunk off the US East Coast. It was the beginning of what German submariners called "The Happy Time." At first, most of the carnage took place out at sea, out of sight of land. Only occasionally did shore residents glimpse the smoke and flame from dying merchantmen. The Navy and Coast Guard fo ught back, but their ships were few and ill-equipped. More U-boatscame, and the grisly toll mounted. Oil, debris, and the bodies of merchant sailors began washing up on US beaches. February saw fifty merchantmen sunk. The total for March would be seventy-four. Paukenschlag was making itself felt. By the end of January, US authorities knew they had a serious problem and no solution. Desperate, they turned to the only country in Europe not dominated by the Nazis. Great Britain, at war with Germany since 1939, knew quite a bit about fighting U-boats. Could the Royal Navy give us a hand? Unfortunately, England needed every one of her destroyers and escort

vessels to protect the convoys that enabled her to stay in the war. However, she did have something the Americans could use. Early in the war, the Royal Navy had converted several coal-burning ocean trawlers for anti-submari ne warfare. Fitted out with depth charges, a rapid-fire 4-inch gun, machine guns, and some with ASDIC (a type of SONAR), these little 12-knot ships had served as escort vessels and U-boat killers while England's shipyards turned out the warships it needed. One of them was the French trawler, Senateur Duhamel. She had escaped France when the Nazis took over in 1940, and had been commandeered by the Royal Navy. Known unofficially as "the destroyer' s poor relation," the trawlers had seen action in Norway and at Dunkirk, as well as on convoy duty. Might the Yanks be interested in the loan of a squadron of these ships, complete with experienced crews? The British didn't have to ask twice; the 24 vessels of the Escort Force Trawler Squadron departed for America in midFebruary 1942. Crossing the North Atlantic in midwinter is no picnic. Stormy seas pounded the little ships, making life miserable for all aboard. On the night of 7 March, a few hundred miles off Newfoundland, HMS Northern Princess di sappeared. No explosion, no radio call, nothing. A search next morning by four of her sisters turned up no trace of the ship or her crew. The only explanation is that she

The largest of the British Escort Force Trawler Squadron sent to the US at the outbreak of Operation Drum Roll was the 900-ton HMS Senateur Duhamel, pictured here in pre-war guise (note tri-color at the stern). She was sunk in May 1942 when rammed at night while on patrol near Morehead City by USS Semmes. A dive on the wreck ofthe Duhamel is what first interested the author in the story of the British trawlers that served in US waters in 1942.