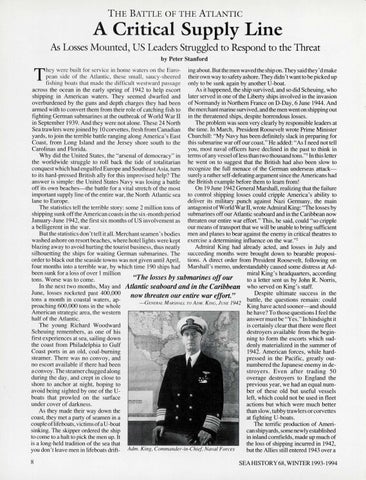 A Critical Supply Line As Losses Mounted, US Leaders Struggled to Respond to the Threat by Peter Stanford hey were built for service in home waters on the Euro- ing about. But the men waved the ship on. They said they&#39;d make pean side of the Atlantic, these small , saucy-sheered their own way to safety ashore. They didn&#39;t want to be picked up fishing boats that made the difficult westward passage only to be sunk again by another U-boat. As it happened, the ship survived, and so did Scheuing, who across the ocean in the early spring of 1942 to help escort shipping in American waters. They seemed dwarfed and later served in one of the Liberty ships involved in the invasion overburdened by the guns and depth charges they had been of Normandy in Northern France on D-Day, 6 June 1944. And armed with to convert them from their role of catching fish to the merchant marine survived, and the men went on shipping out fighting German submarines at the outbreak of World War II in the threatened ships, despite horrendous losses. in September 1939. And they were not alone. These 24 North The problem was seen very clearly by responsible leaders at Sea trawlers were joined by lOcorvettes, fresh from Canadian the time. In March, President Roosevelt wrote Prime Minister yards, to join the terrible battle ranging along America&#39;s East Churchill: &quot;My Navy has been definitely slack in preparing for Coast, from Long Island and the Jersey shore south to the this submarine war off our coast.&quot; He added: &quot;As I need not tell Carolinas and Florida. you, most naval officers have declined in the past to think in Why did the United States, the &quot;arsenal of democracy&quot; in terms of any vesselofless than two thousand tons.&quot; 1 In this letter the worldwide struggle to roll back the tide of totalitarian he went on to suggest that the British had also been slow to conquest which had engulfed Europe and Southeast Asia, tum recognize the full menace of the German underseas attackto its hard-pressed British ally for this improvised help? The surely a rather self-defeating argument since the Americans had answer is simple: the United States Navy was losing a battle the British example before them to learn from! off its own beaches-the battle for a vital stretch of the most On 19 June 1942 General Marshall, realizing that the failure important supply line of the entire war, the North Atlantic sea to control shipping losses could cripple America&#39;s ability to lane to Europe. deliver its military punch against Nazi Germany, the main The statistics tell the terrible story: some 2 million tons of antagonist of World War II, wrote Admiral King: &quot;The losses by shipping sunk off the American coasts in the six-month period submarines off our Atlantic seaboard and in the Caribbean now January-June 1942, the first six months of US involvement as threaten our entire war effort.&quot; This , he said, could &quot;so cripple a belligerent in the war. our means of transport that we will be unable to bring sufficient But the statistics don &#39;t tell ital I. Merchant seamen &#39;s bodies men and planes to bear against the enemy in critical theatres to washed ashore on resort beaches, where hotel lights were kept exercise a determining influence on the war.&quot;2 blazing away to avoid hurting the tourist business, thus neatly Admiral King had already acted, and losses in July and silhouetting the ships for waiting German submarines . The succeeding months were brought down to bearable proposiorder to black out the seaside towns was not given until April , tions. A direct order from President Roosevelt, following on four months into a terrible war, by which time 190 ships had Marshall &#39;s memo, understandably caused some distress at Adbeen sunk for a loss of over 1 million miral King &#39;s headquarters, according &quot;The losses by submarines off our tons. Worse was to come. to a letter sent us by John R. Norris, In the next two months, May and Atlantic seaboard and in the Caribbean who served on King&#39;s staff. June, losses rocketed past 400,000 Despite ultimate success in the now threaten our entire war effort.&quot; tons a month in coastal waters, apbattle, the questions remain: could -GENERAL MARSHALL TO ADM. KtNG, J UNE 1942 proaching 600,000 tons in the whole King have acted sooner-and should American strategic area, the western he have? To those questions I feel the half of the Atlantic. answer must be &quot;Yes.&quot; In hindsight it The young Richard Woodward is certainly clear that there were fleet Scheuing remembers, as one of his destroyers available from the beginfirst experiences at sea, sailing down ning to form the escorts which sudthe coast from Philadelphia to Gulf denly materialized in the summer of Coast po1ts in an old, coal-burning 1942. American forces, while hardsteamer. There was no convoy, and pressed in the Pacific, greatly outno escort available if there had been numbered the Japanese enemy in dea convoy. The steamer chugged along stroyers. Even after trading 50 during the day, and crept in close to overage destroyers to England the shore to anchor at night, hoping to previous year, we had an equal numavoid being sighted by one of the Uber of these old but useful vessels boats that prowled on the surface left, which could not be used in fleet under cover of darkness . actions but which were much better than slow, tubby trawlers or corvettes As they made their way down the coast, they met a party of seamen in a at fighting U-boats. coupleoflifeboats, victims of a U-boat The terrific production of Amerisinking. The skipper ordered the ship can shipyards, some newly established to come to a halt to pick the men up. It in inland cornfields, made up much of is a long-held tradition of the sea that the loss of shipping incurred in 1942, you don&#39;t leave men in lifeboats drift- Adm. King, Commander-in-Chief, Naval Forces but the Allies still entered 1943 over a