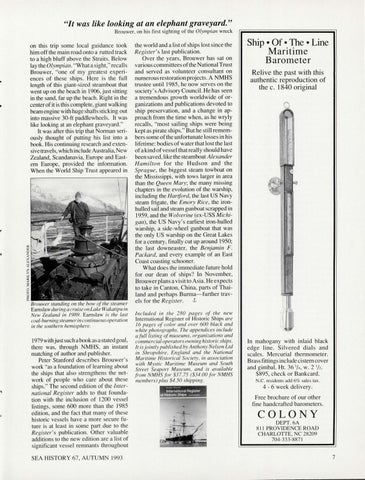 &quot;It was like looking at an elephant graveyard.&quot; Brouwer, on his first sighting of the Olympian wreck

on this trip some local guidance took him off the main road onto a rutted track to a hi gh bluff above the Straits. Below lay the Olympian. &quot;What a sight,&quot; recalls Brouwer, &quot;one of my greatest ex periences of these ships. Here is the full length of this giant-sized steamboat that went up on the beach in 1906, just sitting in the sand, far up the beach. Right in the center of it is this complete, giant walking beam engine with huge shafts sticking out into massive 30-ft paddlewheels. It was like looking at an elephant graveyard.&quot; It was after this trip that Norman seriously thought of putting his list into a book. His continuing research and extensive travels, which include Australia, New Zealand, Scandanavia, Europe and Eastern Europe, provided the information. When the World Ship Trust appeared in

1979 with just such a book as a stated goal, there was, through NMHS, an instant matching of author and publisher. Peter Stanford describes Brouwer&#39;s work &quot;as a foundation of learning about the ships that also strengthens the network of people who care about these ships.&quot; The second ed ition of the International Register adds to that fou ndation with the inclusion of 1200 vessel li sti ngs , some 600 more than the 1985 edition, and the fact that many of these historic vessels have a more secure future is at least in some part due to the Register&#39;s publication. Other valuable additions to the new edition are a list of significant vessel remnants throughout SEA HISTORY 67, AUTUMN 1993

the world and a li st of ships Jost si nce the Register&#39;s last publication. Over the years, Brouwer has sat on various committees of the National Trust and served as volunteer consultant on numerous restoration projects. A NMHS trustee until 1985 , he now serves on the society&#39;s Advisory Council. He has seen a tremendous growth worldwide of organizations and publications devoted to ship preservation, and a change in approach from the time when, as he wryly recalls, &quot;most sailing ships were being kept as pirate ships.&quot; But he sti ll remembers some of the unfortunate losses in hi s lifetime: bodies of water that lost the last of akind of vessel that reall y should have been saved, like the steamboat Alexander Hamilton. fo r the Hud son and th e Sprague, the biggest steam towboat on the Mississippi , with tows larger in area than the Queen. Mary; the many missing chapters in the evolution of the warship, including the Hartford, the last US Navy steam frigate, the Emory Rice, the ironhulled sail and steam gunboat scrapped in 1959, and the Wolverine (ex-USS Michigan), the US Navy &#39;s earliest iron-hulled warship, a side-wheel gunboat that was the only US warship on the Great Lakes for a century, finally cut up around 1950; the last downeaster, the Benjamin F. Packard, and every example of an East Coast coasti ng schooner. What does the immediate future hold fo r our dean of ships? In November, Brouwer plans a visitto Asia. He expects to take in Canton, China, parts of Thailand and perhaps Burma-further travels for the Register. 1Included in rhe 280 pages of the new International Register of Historic Ships are 16 pages of color and over 600 black and white photographs. The appendices include a full listing of museums , organizations and commercial operators owning historic ships. It is jointly published by Anthony Nelson Ltd in Shropshire, England and the National Maritim e Historical Society, in association with Mystic Maritime Museum and South Street Seaport Museum , and is available from NMHS for $37.75 ($34.00 for NMHS members) plus $4.50 shipping. &quot;&#39;~&quot;·•Jl&gt;&#39;&lt;.&gt;e-

Ship • Of • The • Line Maritime Barometer Relive the past with this authentic reproduction of the c. 1840 original

4 - 6 week delivery. Free brochure of our other fine handcrafted barometers.