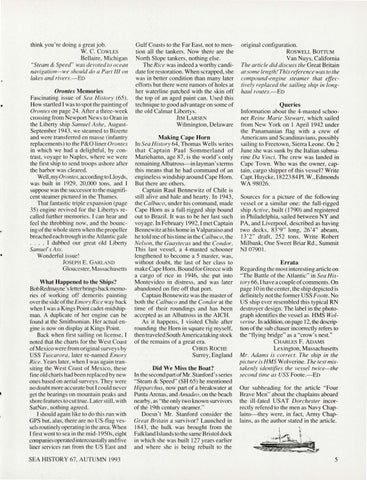 think you &#39;re doing a great job. W. C. COWLES Bellaire, Michigan &quot;Steam &amp; Speed&quot; was devoted to ocean navigation-we should do a Part Ill on lakes and rivers.-ED

Orontes Memories Fascinating issue of Sea History (65) . How startled I was to spot the painting of Orantes on page 24. After a three-week crossing from Newport News to Oran in the Liberty shi p Samuel Ashe, Aug ustSeptember 1943, we steamed to Bizerte and were transferred en masse (infantry replacements) to the P&amp;O liner Orantes in which we had a delightfu l, by contrast, voyage to Naples, where we were the first ship to send troops ashore after the harbor was cleared. Well , my Orantes, accordi ng to Lloyds, was built in 1929, 20,000 tons, and I suppose was the successor to the magnificent steamer pictured in the Thames. That fa ntastic triple expansion (page 35) engi ne rev ived for the Libertys recalled further memories. I can hear and fee l the th robbing now, and the bouncing of the whole stem when the propeller breached each tro ugh in the Atlantic ga le . . . . I dubbed our great old Liberty Samuel&#39; s Ass. Wonderful iss ue! JOSEPH E. GARLAND

What Happened to the Ships? Bob Redmayne&#39; s letter brings back memories of working off demerits painting over the side of the Emory Rice way back when I was a Kings Point cadet-midshipman. A duplicate of her engine can be fo und at the Smithsonian. Her actual engine is now on display at Kings Point. Back when firs t sailing on license, I noted that the charts fo r the West Coast of Mex ico were from original surveys by USS Tuscarora, later re-named Emory Rice. Years later, when I was aga in transiting the West Coast of Mexico, these fine old charts had been replaced by new ones based on aerial surveys. They were no do ubt more accurate but I could never get the bearings on mo untai n peaks and shore features to cuttrue. Later sti ll, with SatNav, nothi ng agreed. I should again like to do thi s ru n with GPS but, alas, there are no US-fl ag vessels ro utinely operating in the area. When I firs t went to sea in the mid- l 950s, eight companies operated intercoastal ly and five liner serv ices ran fro m the US East and SEA HISTOR Y 67, AUTUMN 1993

Gulf Coasts to the Far East, not to mention all the tankers. Now there are the North Slope tankers, nothing e lse. The Rice was indeed a worth y candi date fo r restorati on. When scrapped, she was in better condition than many later efforts but there were rumors of holes at her waterline patched with the skin off the top of an aged paint can. Used thi s technique to good advantage on some of the old Calmar Libertys . JIM L ARSEN

Making Cape Horn In Sea History 64, Thomas Well s writes tha t Ca pta in Pa ul Somme rl a nd of Mari ehamn , age 87, is the world &#39;s onl y remaining Albatross-in layman&#39;s terms thi s means that he had command of an engineless windship around Cape Ho m . But there are others. Captain Raul Bennewitz of Chile is still alive and hale and hearty. In 1943, the Calbuco, under hi s command , made Cape Hom as a full -rigged ship bound out to Brazil. It was to be her last such voyage. In February 1992, I met Captain Bennewitz at his home in Valparaiso and he told me of hi s time in the Calbuco, the Nelson, the Guaytecas and the Condor. Thi s last vessel, a 4-masted schooner lengthened to become a 5 master, was, without doubt, the last of her class to make Cape Hom. Bound fo r Greece with a cargo of rice in 1946, she put into Montevideo in di stress, and was later abando ned on fire off that port. Captain Bennew itz was the master of both the Calbuco and the Condor at the time of their roundings and has been accepted as an Albatross in the AICH. As it happens, I visited Chile after ro unding the Hom in square rig myself, then traveled South America taking stock of the remains of a great era. C HRI S R OC HE

Did We Miss the Boat? In the second part of Mr. Stanfo rd &#39;s series &quot;Steam &amp; Speed&quot; (SH 65) he mentioned Hipparchus, now part of a breakwater at Punta Arenas, and Amadeo, on the beach nearby, as &quot;the only two known survivors of the 19th century steamer.&quot; Doesn &#39; t Mr. Stanfo rd consider the Great Britain a survi vor? Launched in 1843, the hulk was brought fro m the Falkland Islands to the same Bristol dock in which she was built 127 years earlier and where she is be ing rebu ilt to the

Van Nuys, Califo rnia The article did discuss the Great Britain at some length! This reference was to the compound-engine steamer that effectively replaced the sailing ship in longhaul routes.-ED

Queries Info rmation about the 4-masted schooner Reine Marie Stewart, which sailed from New York on 1 April 1942 under the Panamanian fl ag with a crew of Americans and Scandinavians, possibly sai ling to Freetown, Sierra Leone. On 2 June she was sunk by the Italian submarine Da Vinci. The crew was landed in Cape Town. W ho was the owner, captain , cargo shipper of this vessel? Write Capt. Huycke, 18223 84 Pl. W., Edmonds WA 98026. Sources for a picture of the foll owing vessel or a simil ar one: the full -rigged ship Active, built ( 1790) and registered in Philadelphi a, sailed between NY and PA, and Li verpool, described as having two decks, 83&#39;9&quot; long, 26&#39;4&quot; abeam, 13 &#39;2&quot; draft, 252 to ns. Write Robert Mi lbank, One Sweet Briar Rd ., Summit NJ 0790 1.

Errata Regarding the most interesting article on &quot;The Battle of the Atl antic&quot; in Sea History 66, I have a coupl e of comments. On page 10 in the center, the ship depicted is definitely not the fo rmer USS Foote. No US ship ever resembled thi s typical RN destroyer design. The label in the photograph identifies the vessel as HMS Wolverine. In addition, on page 12, the description of the sub chaser incorrectl y refers to the &quot;flying bridge&quot; as a &quot;crow&#39;s nest. &quot; C HARLES F. ADAMS Lex ington, Massachusetts Mr. Adams is correct. The ship in the picture is HMS Wolverine. The text mistakenly identifies the vessel twice--the second time as USS Foote.-ED Our subheading fo r the article &quot;Four Brave Men&quot; about the chaplains aboard the ill-fated USAT Dorchester incorrectl y refered to the men as Navy Chaplains-they were, in fac t, Army Chaplain s, as the author stated in the article.